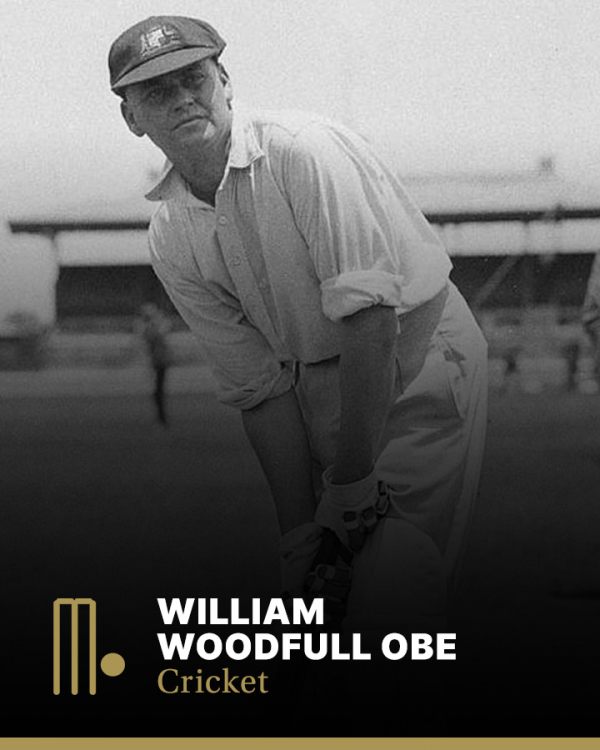 As a boy, Bill Woodfull played cricket at home under the tuition of his father. The conditions were rather primitive, but from the very first lesson, Woodfull Senior had impressed upon him the necessity and importance of the straight bat. The effect of this early coaching could plainly be seen in his style and methods.

Known as “The Rock” because of his imperturbable temperament, he possessed immensely strong defence and great patience. Though the backlift of his bat was very short, his weight and strength of wrist enabled him to score at a faster rate than a more attractive player.

He watched the ball more closely than any of his colleagues, and kept his bat beautifully straight. His action seemed a little labored because he never lifted the bat any noticeable distance from the ground, but, blessed with strong forearms, he could drive with great power.

Originally from Maldon, Victoria, in 1921 at the age of 24, he was transferred as a schoolteacher to Melbourne and immediately came to the attention of Victorian selectors. He was rushed into the state team and soon made his mark as a prolific middle-order batsman. Elevation to the top of the order saw him forge a legendary opening partnership with Bill Ponsford, and they pitilessly embarrassed the best Sheffield Shield bowlers in the land.

For Victoria, Bill Woodfull registered 16 centuries, of which the biggest was 275 not out. His most prolific opening partnership for the state was 375 with Ponsford against New South Wales in 1926-27 in Melbourne.

In 1922 he first appeared in important cricket for Victoria against South Australia at Adelaide, and innings of 23 and 117 against New South Wales in the following summer made his position secure. During that season he averaged 85 in Sheffield Shield matches, and 74 two years later, when against South Australia his scores were 97 and 236. In 1924/25 when after NSW had made 614 in the first innings he, with innings of 81 and 120 not out, had a lot to do with Victoria taking a great victory.

In 1926 Woodfull was the last man picked in the Australian squad to tour England. He didn’t bat in the first Test and struggled in the middle-order in the second Test, but promoted to opener for the third Test at Headingly he responded with 141, hit 117 in the fourth Test, and went on to be Australia’s top run scorer for the tour.

Woodfull’s superb character saw him elevated to the Australian captaincy in 1930, succeeding Jack Ryder. He led his country with great distinction, and was the ideal man to handle the Bodyline crisis of 1932/33 when the touring English cricket team, led by Douglas Jardine, used the tactic of bowling at the bodies of the Australian batsmen. Despite numerous injuries to himself and his players, he remained publicly calm and patient throughout this tumultuous series, only expressing his true disgust in private. Though he achieved little against this menacing form of bowling in the first two Test matches, four innings bringing him no more than 43 runs, he displayed such grit and determination in the remaining three that he put together innings of 73 not out, 67 and 67. Bill Woodfull refused to consider retaliation under any circumstances.

One remark, to English team manager Pelham Warner as he visited the Australian dressing room to express sympathies for a nasty wound to Woodfull caused by the Bodyline bowling, was leaked to the press and became one of the most famous quotations to emerge from this momentous period of cricket history:

“I don’t want to see you, Mr Warner. There are two teams out there. One is trying to play cricket and the other is not”.

The comment was leaked to the newspapers and caused an international incident. The Australian cricket authorities cabled the MCC requesting that they instruct the England team to stop using the unsportsmanlike “Bodyline” tactics. The MCC refused to instruct the England team and threatened to recall them. The discussions were then taken up at diplomatic and government levels to calm down the situation. England went on to win the Third Test, 753 runs to Australia’s 415.

In the fifth Test in Sydney Larwood broke a bone in his foot, but Jardine made him complete the over. Larwood stood stationary at the wicket and bowled and Bill Woodfull, the true sportsman, refused to take advantage of the injured bowler and blocked the remaining deliveries back down the wicket. The series ended with England winning 4 to 1.

After the Bodyline series, Woodfull led Australia to England in the reconciliatory tour of 1934, after which he retired from first-class cricket.

Cricket was Woodfull’s game, and the MCG was his ground. In December 1926, he shared a magnificent opening stand of 375 with Ponsford for Victoria against NSW at the G as the Vics accumulated a world-record 1107. They won that match by an innings and 656 runs! It was utterly appropriate that when the two greats retired in 1934 they had a joint testimonial match – at the MCG. Woodfull, as was his way, celebrated the occasion with one last ton on the ground that he loved.

The bond between Woodfull and the MCG is demonstrated by a look at his record at the famous ground. His first Test at the MCG was against England in 1928/29; he hit 107. His second Test at the MCG was in the same series, and he compiled 102. His third MCG Test was in 1930/31 against the West Indies where he scored 83, and his fourth ever Test at his home ground was against South Africa in 1931/32 where he hit 161.

Outside cricket, Woodfull made a successful career as a teacher and served as headmaster of Melbourne High School. He always considered his contributions to education more important than anything he ever did on the cricket field. In 1934 he turned down the offer of a knighthood for services to cricket, but in 1963 became an Officer of the Order of the British Empire (OBE) for services to education.

His quiet, unassuming demeanor won him respect and affection from teammates and opponents alike.

He was inducted into the Australian Cricket Hall of Fame in 2001.