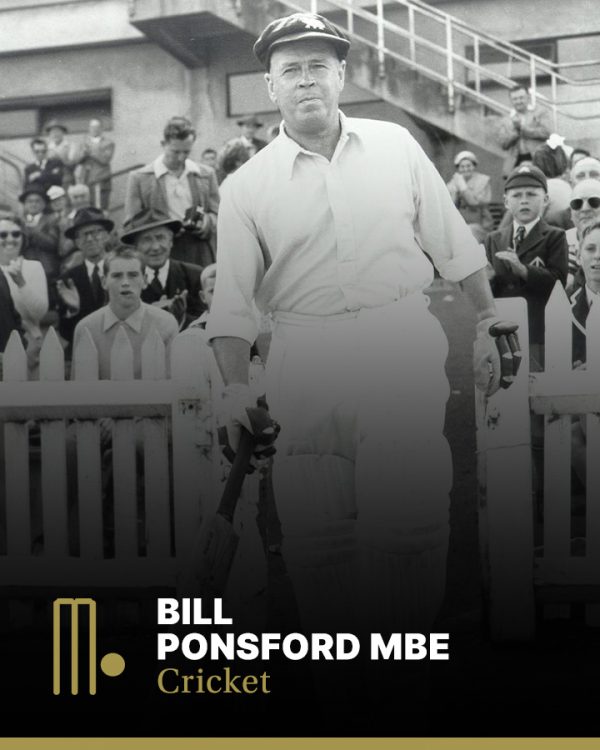 Ponsford showed an unusual aptitude for cricket from his earliest years, taking as his model Les Cody, the state player, whose stroke play he greatly admired. Pennant cricket for the St Kilda club led to his first-class debut for Victoria in 1920/21, against Douglas’s MCC side. A baseball batter’s strength of forearm and wrist enabled him to wield a very heavy bat, and if never exactly a stylist, Ponsford soon developed into a formidable all round batsman, with great strength on the on side. He was a fierce driver in front of the wicket and always worked hard to keep up the momentum of an innings; his two quadruple centuries each contained 42 fours.

He made 162 in his second first class game, for Victoria against Tasmania in Launceston in February 1922, but did not play for the state again until selected against the same opposition a year later in Melbourne. Then, in what was only his fourth innings, he created a sensation by hitting 429 in 477 minutes: it was the world’s highest first-class score until he bettered it five years later with 437. Until Brian Lara scored 400* against England in 2004, Ponsford was the only man to have played two first class innings of 400 or over.

Furthermore, Victoria’s 1059 was the first four-figure total in any first-class match, and Ponsford, who was captaining the side, stayed until he made the 1000th run himself, having gone in at 3 for 200.

Nobody in history could boast a better hello and goodbye to the Test arena. Using a heavy bat affectionately known as ‘Big Bertha’, the great man scored a century in his first Test (also in the second) in 1924 and departed the international scene ten years later with farewell innings in England of 181 and 266, both in record partnerships with the Don.

In his first and last series, those of 1924/25 and 1934 against England, he made nearly half of his total Test runs for an average of 64.81, whereas in his other six series he made his runs at under 40. During the 1924/25 season he played in all five Tests against England and scored 110 and 128 in the first two, an unprecedented achievement. In 1926, his first tour of England was ruined by an attack of tonsillitis, which kept him out of action for the whole of June. In 1928/29, a ball from Larwood broke a bone in his hand in the second Test, at Sydney, after he had dismissed him for 2 and 6 at Brisbane. Although a member of the supporting cast in England in 1930, Ponsford played two fine innings – 81 at Lord’s and 110 at The Oval; and in 1930/31 he took heavy toll of the West Indies attack, just pipping Bradman in the averages. But in his other three series against England, the rhythm and progress of his Test career was disrupted by illness, injury and Bodyline. Ponsford, always an opener, made enough runs to suggest he could cope with fast bowling. There were plenty of top-line spinners around the world who preferred to bowl to Bradman, who at least gave them a sight of the stumps occasionally!

In Adelaide during the 1932/33 Bodyline series he scored a very plucky 85 and teammates were amazed when his shirt was removed to reveal red, blue and purple bruises from shoulders to buttocks. To the fast-rising deliveries, right on line, that he assessed as too risky for any stroke, Ponsford unflinchingly turned his broad back to the barrage, collecting painful blows instead of runs but keeping his high-priced wicket intact. “I wouldn’t mind having a couple more if I could get a hundred,” said the battered batsman to a sympathetic Bill O’Reilly.

As for Ponsford against slow bowling, you saw a sturdy, sure-footed figure in a surprisingly quick, spiked-shoe shuffle to the pitch of the ball at every opportunity. He played shots all around the compass but was dynamite to anything on his legs.

In Test matches, Ponsford formed a notable opening partnership with Bill Woodfull, but his most famous achievement occurred in partnership with Don Bradman. Though these two, the two heaviest scorers in Australian cricket, had played together in Tests for six years they hardly had any major stands together. They remedied this at Leeds in 1934 in the fourth Test by adding 388 for the fourth wicket, then a record for any wicket. Ponsford’s play was seen to be not one bit inferior to Bradman’s. England was overwhelmed, but the damage done to them at The Oval was even worse. The duo went one better adding 451 for the second wicket in just 316 minutes. This partnership was a world record until 1991. Ponsford’s personal contributions in those two Tests were 181 and 266. He topped the Test averages with 569 runs at 94.83.

Above all, he had shown the English public what he could do, whereupon he deemed it appropriate to retire from first class cricket when still only 34.

As a batsman, Ponsford was the only man who partnered Bradman at the highest level without being overshadowed. Sir Donald is on record with the ultimate compliment: “I liked batting with Bill. He gave me great confidence.” A superb outfielder in any position, he had 71 catches to his credit – although, when examined for war service, he was found to be red-green colour-blind. He was a man of few words outside the dressing room, shy, modest and shunning publicity at all costs.

Apart from cricket, Bill Ponsford was one of Australia’s top baseballers. At 13, he was the youngest member of Victoria’s schoolboy team (under 18) and began his senior career as a catcher for Fitzroy. He represented Victoria and in the early days of Australian baseball he was renowned for his place hitting, a skill then acquired by few contemporaries. He followed a long line of cricketer-baseballers whose fielding and throwing gave Australia a distinct edge for many years.