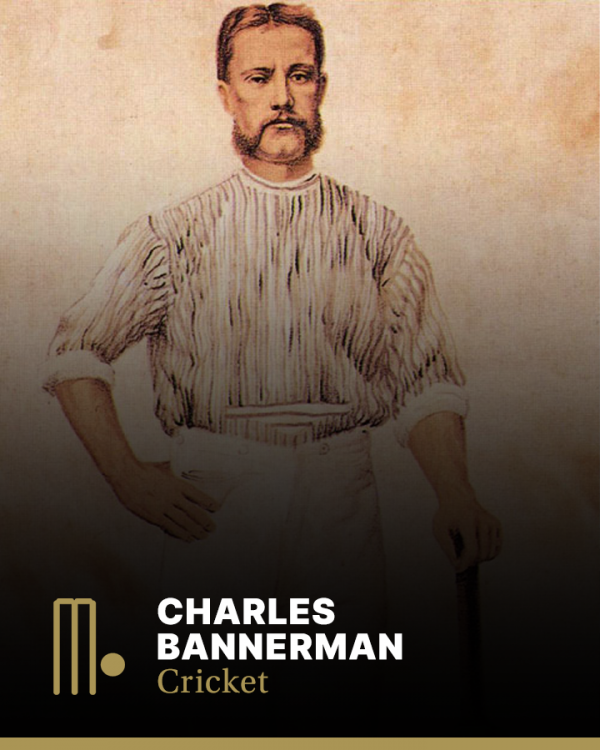 Described as a ‘pocket Hercules’, Charles Bannerman was a diminutive right hand batsman who scored Test cricket’s first century, in the first Test in Melbourne in 1877. He was rated by English captain James Lillywhite as the world’s greatest player behind W G Grace. Famed for his aggressive and, at that time, unfashionable front foot play, Charles was lionised by the colonial press and became the fist ‘star’ of Australian cricket. His career was both dramatic and short lived.

In his day he was the best in Australia. He stood well up to the ball, and was master of nearly every stroke; indeed his batting was essentially skillful and polished. He drove finely to the off, and could hit with power and accuracy to leg. Over and above his qualities as a run-getter he had another claim to fame as being a first-class fielder, no matter the position in which he was put.

The match in which he really made his name took place in Melbourne in the middle of March, 1877, in the first Test of all, the match that started international cricket. James Lillywhite’s team was then touring Australia and New Zealand, and so much had the standard of cricket in Australia improved since the previous visit of an English side under W. G. Grace that when the New South Wales XV twice beat Lillywhite’s men and Victoria XV also overcame them, the challenge was made to play an eleven-a-side match against the Englishmen. The faith the Australians had in themselves was justified, with England lacking the assistance of a recognised wicket-keeper, Australia won by 45 runs.

Charles Bannerman had the distinction of playing an innings of 165. He has the honour of facing the first ball ever bowled in Test cricket (the bowler being England’s Alfred Shaw) and was the first Australian cricketer to ever score a century against England. The runs were made against Shaw, Hill, Emmett, Southerton, Ulyett and Lillywhite.

He retired with a split finger after opening Australia’s innings. By the time the Yorkshireman Ulyett broke open one of his fingers on the second day, causing him to leave the field, his place in cricket history was secure. The next best score in that innings was 18 not out from Garrett. For his feat, spectators at the match collected £83 to present to him.

In a return match, on the same ground, Lillywhite’s team won by four wickets. In the second match Bannerman made 19 and 30.

Bannerman played in the next two Tests, and in his brief Test career he scored 239 runs at an average of 59.75.

In 1878 Charles Bannerman was part of the first visit of an Australian team to England. In the course of the tour he scored 723 runs for an average of 24.10 and became the first Australian to score a century in England. He obtained the only hundred scored by any of the Australians that summer, making 133 at Leicester against Leicestershire.

Towards the end of May he took part in the historic match at Lord’s against the M.C.C., when the Maryleborne Club were dismissed by Spofforth and Boyle for 19. His brother Alick was also in that first touring team, making the Bannermans the first of a long line of brothers who have distinguished themselves in Australian cricket. The Australians won by nine wickets. Bannerman paid no other visit to England, illness cutting short his career as a cricketer.

He retired, officially through ill-health, but it was suggested that he could not cope with celebrity status, and that gambling debts and alcohol left him impoverished.

At various times Charles undertook coaching duties in Melbourne and Sydney and at Christ’s College, Christchurch, in New Zealand.

Between 1887 and 1902 Charles stood as umpire in 12 Test matches in Australia. His first match was between Australia and England in Sydney, January 28 to 31, 1887, won by England by 13 runs after scoring a paltry 45 runs in their first innings. His last match, in Melbourne in the 1901/02 season, was also a close low-scoring affair, with Australia winning by 32 runs. In two of the matches in which Charles Bannerman officiated, his brother Alick was a player. No accusations of bias could be made – Alick scored only 23 runs in four innings!

In the fifth Test in the 1897/98 series Bannerman turned down a confident LBW appeal against Australian batsman Joe Darling when the match was in a tense situation. The LBW seemed obvious but the bowler had run in front of the umpire who was unsighted and had to reject the appeal. Darling, then on 50, went on to 160, winning the match for Australia. After the game Bannerman lodged an official complaint against the English wicket-keeper who had accused him of cheating, and the player was rebuked.

In the 1922/23 season the first radio broadcast of a cricket match anywhere in the world was a match played as a benefit for Charles Bannerman, from which he received £490.