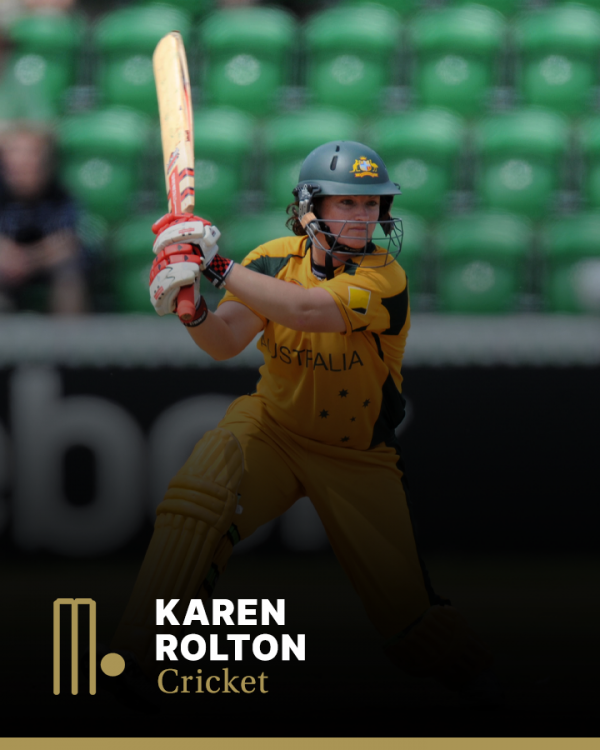 Karen Rolton was inducted into the Sport Australia Hall of Fame in 2021 as an Athlete Member for her contribution to the sport of cricket.

Karen Rolton was a prolific run-scorer and consistent wicket-taker in Test, ODI and T20 cricket throughout her career. In all, she scored 1002 runs at 55.66 in 14 Tests, 4814 runs at 48.14 in 141 ODI’s and 405 runs at 50.62 in 15 T20’s, as well as claiming 102 wickets across all three formats. Her 10 centuries included a Women’s Test record 209 not out v England in 2001, and a match-winning 107 at the 2005 Women’s ICC World Cup final. Rolton was the inaugural winner of the ICC Women’s Player of the Year Award in 2006, was the Belinda Clark Medallist on four occasions and was the third female to be inducted into the ICC and Australian Cricket Halls of Fame.

Karen Rolton made her One Day International (ODI) debut in the 1995 New Zealand Women’s Centenary Tournament – a tri-series tournament between Australia, New Zealand and India. In her debut game, she took 3-34 off 9.5 overs and made 33 runs off 34 balls. She finished the series with six wickets and 52 runs.

Her Test debut came later on that same Tour to New Zealand. In the only test of the tour that ended in a draw, Rolton claimed four wickets for 68 runs and scored 65 runs off 150 balls.

In 1997 Rolton played nine ODI’s leading into the ICC Women’s World Cup, with her penchant for scoring runs against New Zealand on display again. Among those games, she scored a match-winning 113 not out in the fifth ODI of Australia’s Trans-Tasman Tour. Rolton’s consistency throughout these lead-in matches earned her selection in the Australian World Cup squad. She played a pivotal role in Australia winning the World Cup, making 115 runs at 57.50 from four innings and claiming five wickets at 15.00.

Rolton scored her maiden Test century against Australia’s oldest rival, England, in 1998. In a standout performance, she scored 176 not out from 236 balls.

Rolton’s highest ODI score of 154 not out came at the 2000 ICC Women’s Cricket World Cup, a tournament in which Australia suffered a heart-breaking four-run loss to New Zealand in the final. She finished the tournament as the leading run-scorer with 393 runs at 131.00 from seven innings, which included two centuries, two half-centuries and a top score of 154 not out against Sri Lanka. She also claimed four wickets and took two catches in the tournament, showcasing her all-round ability.

Rolton scored a then world record of 209 not out from 303 balls in a Test match against England in 2001. In doing so, she became only the third Australian woman to make a double century in Test cricket, following teammates Joanne Broadbent OAM and Michelle Goszko. Through the 2001, 2002 and 2003 seasons, Rolton’s performances were brilliant and consistent, culminating in back-to-back Belinda Clark medals in 2002 and 2003, as Australia’s best Women’s cricketer.

Heading into the 2005 World Cup in South Africa, Rolton and her Australian teammates were eager to atone for their narrow loss in 2000. They did so in emphatic style with a 98-run win against India in the final. She was named Player of the Tournament after scoring 246 runs at 61.5, which included her Player of the Match score of 107 not out on the biggest stage of them all. She also claimed 10 wickets at 11.20 and took three catches, further enhancing her already significant reputation as one of the game’s leading all-rounders.

Later that year, in her first International T20 match against England, Rolton was again named Player of the Match after a scorching 96 not out from only 53 balls. In the same match, she opened the bowling and claimed two important wickets. The 2005 year would end on another high as Rolton claimed her third Belinda Clark Medal in four years.
In 2006 Rolton was named Captain of the Australian Women’s Cricket Team, taking over from Belinda Clark. Her outstanding performances were also rewarded when she was named the inaugural ICC Women’s Cricketer of the Year and earned a fourth Belinda Clark Medal.

Rolton played her final World Cup in 2009, her first as Captain and the first for the Australian Team playing on home soil. Although the team finished fourth, Rolton ended the tournament as Australia’s second leading run-scorer with 220 runs at 55.00 including a high score of 96 not out.

Rolton set many records over her career, including the most Test runs batting at No.3, the most double centuries, the most consecutive innings without a duck in ODI’s, and the highest score of any player on debut in a Women’s T20 International.