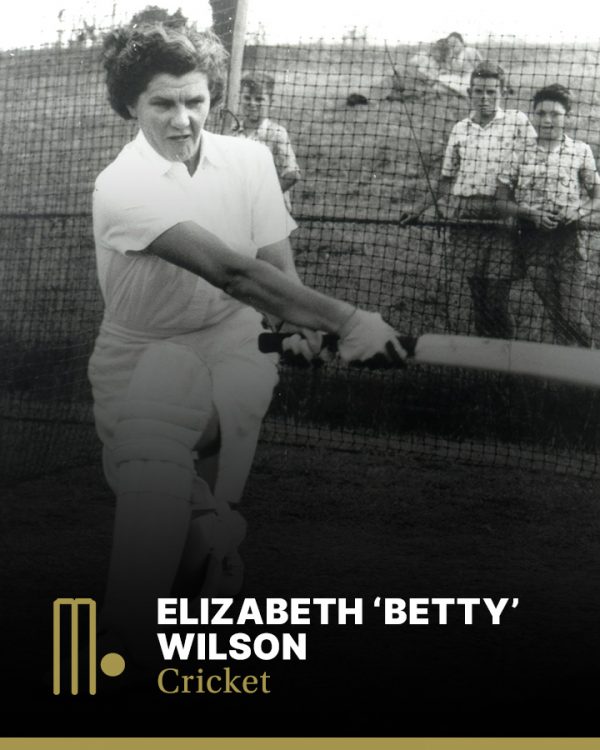 Betty Wilson is considered as one of the greatest female cricket players of all-time. She represented Australia in women’s Test cricket between 1947/48 and 1957/58. Betty batted right handed, and was a good off-spin bowler and a superb fielder.

She grew up in Collingwood, Victoria and learned the game by playing against a lamp post in her street. At the age of 10, she joined the Collingwood Women’s Cricket Club where she played with the adults. She made it to the Victoria second XI at the age of 14, and to the senior side at 16. The Second World War delayed her Test appearances until 1948. On her debut against New Zealand, she scored 90 and took 4/37 and 6/28. In her second Test, she scored 111 against England becoming the first Australian woman to score a Test century against England, and took nine more wickets.

She toured England in 1951 and scored 81 in the first Test at Scarborough. Against Yorkshire, she scored 100 not out in 77 minutes, leading Australia to a last ball win. After this series, she stayed in England for two and a half years.

In the 1957/58 Test against England in Melbourne, she turned out a great allround performance and became the first cricketer, male or female, to score a 100 and take 10 wickets in a Test. On a wet wicket, she took 7/7 in the first innings which included the first ever hat trick in a women’s Test (the feat was not repeated until Shaiza Khan of Pakistan did the same in 2004). She then took 4/9 in 19 overs in the second. She top scored with 12 runs in Australia’s low first innings and a 100 in the second. A century and a hat trick in the one Test match had never been accomplished before.