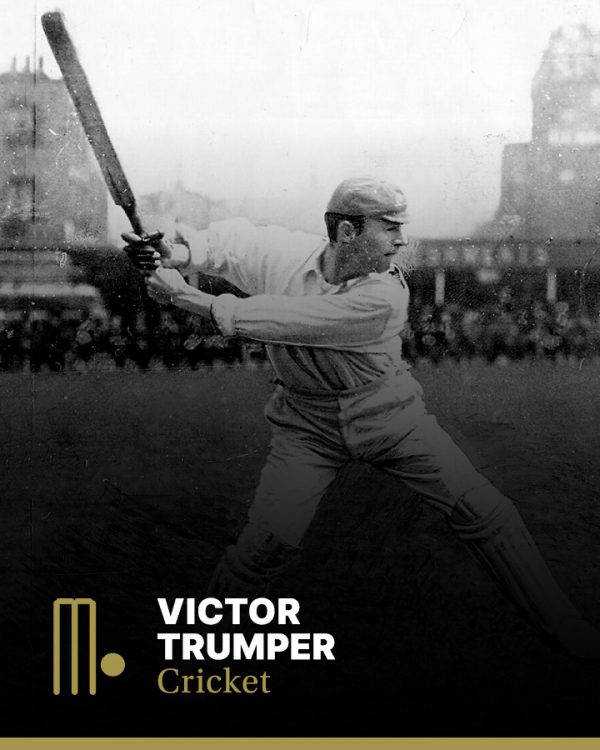 Acknowledged universally as international cricket’s consummate batting genius, Victor Thomas Trumper was the most revered Australian player of his time.

He was in a class of his own for athletic artistry, stroke making improvisation and brilliant aggression. Those who played with or against Trumper, and the observers who recorded his triumphs, exhausted the supply of adjectives in attempting to convey convincing evidence of the great man’s mastery.

Trumper was bought up by a cricket loving father in Paddington, Sydney, and from a tender age was taken every morning at 6am to practice on the Moore Park concrete wickets. Trumper was always the star of Crown Street Superior School team and at the age of 17 was selected to play for New South Wales. In 1899 he made his first trip to England with the Australian team and in only his second Test scored a magnificent 135 not out at Lord’s.

As an opening batsman Trumper’s approach was unique. He would attack from the very first ball without indulging in the conventional practice of assessing the pace and bounce of the wicket. Sometimes he paid the penalty for his daring, but in full flight he was a supreme entertainer, combining incomparable grace, dash and style in his execution of a variety of strokes not seen before.

Trumper paid four visits to England, 1899, 1902, 1905, and 1909. In 1899, he jumped at once into the front rank, playing a splendid innings of 135 not out against England at Lord’s and scoring 300 not out against Sussex at Brighton. His innings at Lord’s was in itself sufficient to prove that Australia had found a world’s batsman.

But it was in 1902 that he reached his highest point. In that summer of wretched weather he scored 2570 runs in 35 matches for the Australian team, with the wonderful average, in the circumstances, of 48. Trumper literally played dry-weather cricket on virtual mud heaps, countering the biting turn of slow and medium-paced spin with lightning footwork. He was as consistent as he was brilliant, and did not owe his average to a few exceptional scores. Of eleven innings of a hundred or more, the biggest was 128. He played very well in 1905 and 1909, but he was no longer pre-eminent. He was fifth in the averages in 1905, and in 1909, he was again seen at his best, notably against England at The Oval, when he played DW Carr’s googlies with perfect ease, and in the second match against MCC at Lord’s.

His career culminated when the South Africans visited Australia in the season of 1910/11. He then recovered his finest form, and on the beautiful wickets in Melbourne, Adelaide, and Sydney the googly bowlers had no terrors for him. In the five Test matches he scored 662 runs, with an average of 94. It was agreed on all hands that he had not played so well since his trip to England in 1902.

In private life Victor worked in NSW government jobs (as a schoolteacher initially) before graduating to sports store partnerships, the second being with J.J. Giltinan, with whom he established the rugby league football code and became the inaugural honorary treasurer.

His sports store ventures did not succeeded financially because of the Trumper generosity. He could not resist the appeal of youngsters, short of money, requiring cricket gear and frequently gave away what he should have been selling.

Trumper was the most popular Australian cricketer of his time. A match played for his benefit between NSW and the Rest of Australia in Sydney in February 1913, produced £3000 in gate money and donations.

Victor Trumper died at Sydney from kidney disease in 1915. It was the second year of the greatest war in history, but newspaper posters throughout England proclaimed Trumper’s death as the really important news of the day – the first and maybe the last occasion on which a cricketer pushed a world war off the billboards!