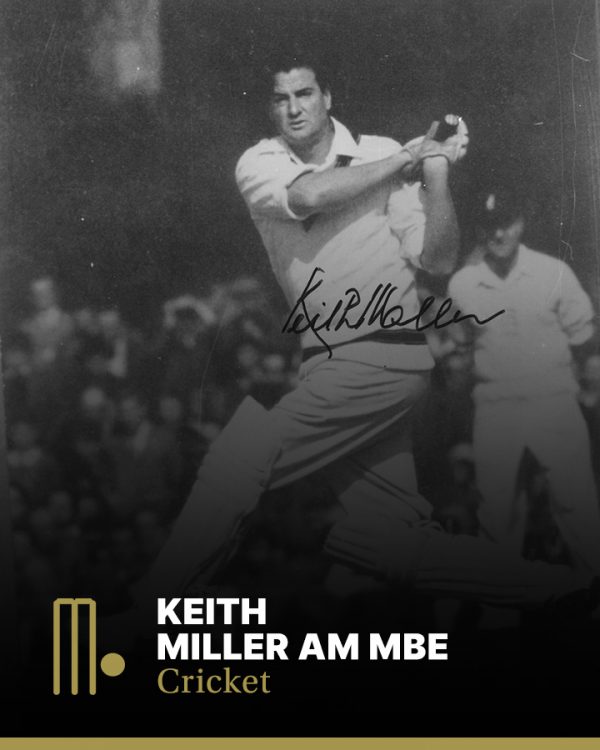 Keith Ross “Nugget” Miller was Inducted into The Sport Australia Hall of Fame in 1986 as an Athlete Member for his contribution to the sport of cricket and was Elevated to “Legend of Australian Sport” in 2004.

Miller was an elegant batsman, with tremendous driving power and equal efficiency off the back foot. But he was more than a cricketer: he embodied the idea that there was more to life than cricket. In a flamboyant first-class career spanning 22 summers Miller demonstrated on numerous occasions his ability to turn a game with dynamic batting or thunderbolt bowling.

Named after the Australian pioneer aviator brothers Keith and Ross Smith, Miller was a natural sportsman, playing 50 matches in the VFL for St Kilda, mainly at full back and centre half back, and was a member of the Victorian state football team in 1946. He first came to public notice for his cricket ability at the age of 16 when he scored 61 for South Melbourne Cricket Club in a match against Carlton Cricket Club, which was captained by Bill Woodfull, the former Australian captain who was also the headmaster of Melbourne High School where Miller was a student.

At 18, Miller made a debut 181 for the Victorian seconds against Tasmania in Melbourne, and in 1939/40 confirmed his great natural ability with an MCG century against a South Australian attack headed by Clarrie Grimmett. Before going overseas, Miller made his first-class debut in the second innings on the MCG in January, 1941, taking 1 for 24 from six overs. He surprised everyone with his pace and lift, including his victim, South Australian star Ken Ridings. Thereafter, Miller assumed his full potential as a bowler to be respected, if not feared. He went on to hit 14,183 first-class runs at 48.90, taking 497 wickets at 22.30.

However, as with many of his contemporaries, his cricket career was interrupted by the Second World War, during which he served with the Royal Australian Air Force in Europe, as a pilot of Mosquito fighter-bombers, flying night missions over Germany. Miller had several narrow escapes, and injured his back when making a bellylanding after one of his plane’s engines failed. This injury restricted his bowling on occasions during his subsequent cricket career. When asked by Michael Parkinson about pressure on the field, referring to his time as a pilot during the War, Miller famously replied “Pressure is a Messerschmitt up your arse, playing cricket is not.”

Between wartime duties in the UK he played for RAAF sides against various RAF and Army combinations. In May 1945 peace came to Europe and the dashing Australian treated the English public, starved of cricket for six years, to some wonderful entertainment. Miller was the immediate post-war sporting hero in England, hitting 105 in the first ‘Victory Test’. His popularity at the home of cricket ensured a warm welcome and media attention for more than half a century after his first appearance at Lord’s. Because of his irreverent manner and good looks he was a crowd favorite.

Miller made his official Test debut after the war, and went on to play 55 times for Australia, scoring 2958 runs at 36.97, with seven centuries, three of them against England and four against West Indies, whose captain, John Goddard, once sighed, “Give us Keith Miller and we’d beat the world.”

His great form with bat and ball for the Australian Services Team in England, India and Australia during 1945 earned Miller a place in the Australian tour to New Zealand, where he made his initial Test match appearance in Wellington in 1946. Against England in the following season Miller demonstrated his class before Australian fans in no uncertain manner, finishing second to Bradman in the batting with 76.80 and second to Lindwall with the ball (16 wickets at 20.87).

Bradman’s strong side needed Miller more as a bowler than a batsman, and he ended up with 170 Test wickets, at the excellent average of 22.97. He was the perfect foil to the smooth, skiddy Lindwall: Miller would trundle in off a shortish run, but could send down a thunderbolt if he felt like it. Or a legspinner. Or a yorker. Or a bouncer, an overdose of which led to his being booed during the 1948 Trent Bridge Test: Miller simply sat down until the barracking had subsided. What few people realised was that he had trouble with his back throughout that tour – he often pressed an errant disc back into place at the base of his spine before somehow sending down another screamer.

Despite this, Miller remained a fearsome proposition as a bowler, grinning down the pitch at the discomfited batsman, returning to his mark and flicking back his hair. In 1956, on his third and final tour of England, Miller was nearing 37 and hoping not to do much bowling. But his pal Lindwall pulled out of the second Test at Lord’s, and his replacement Pat Crawford broke down in his fifth over. Miller shouldered the burden, bowling 34.1 overs in the first innings and 36 in the second, and took five wickets both times (10 for 152 for the game) to set up Australia’s 181-run victory, their only one of that series. Miller scored 109 in the 1953 Lord’s Test, and remains the only man to have his name on both the batting and bowling honours boards in the visitors’ dressing-room there.

A perfect illustration of a selfless sporting attitude that earned the affection of cricket lovers was his memorable innings against Essex, at Southend, during the triumphant march of the 1948 Invincibles. With Australia 2 for 364 and heading for a record 721 for the day against a battered, demoralised attack, Miller, bored by the one-sided proceedings, was bowled for a first-ball duck. He said, “Thank God that’s over” to the ‘keeper and walked off. There is no question that he had thrown his wicket away as a merciful gesture, but Miller refused to answer any question on the matter.

Although a born leader, Miller never captained Australia. He successfully captained New South Wales but he had an unusual approach to captaincy, sometimes setting his field by telling the other players to “scatter”. On another occasion, having omitted to nominate a 12th man, he found himself with 12 players on the field. He observed, “Well, one of you had better bugger off.”

John Arlott, the distinguished English cricket writer, once observed of Miller, “If I had my choice of a player to win a match off the last ball, whether it required a catch, a six, or a wicket, I would pick only one player, Keith Ross Miller”. Because of his flair for the unpredictable as a batsman and bowler, plus his uncanny skill as a slips fieldsman, he has often been nominated as the finest all-rounder cricket has seen.

Retiring from international cricket in 1956 after a tour of England, Pakistan and India, Miller was a special cricket writer for England’s Daily Express for 20 years and was made a Member of the British Empire (MBE) in 1956 for his services to cricket. His most cherished reward was Marylebone’s commissioning of the Miller portrait now hanging in the Lord’s pavilion. Sir Donald Bradman, Victor Trumper, and Shane Warne are the only Australians to be similarly honoured. Miller was one of the ten inaugural inductees into the Australian Cricket Hall of Fame in 1996.