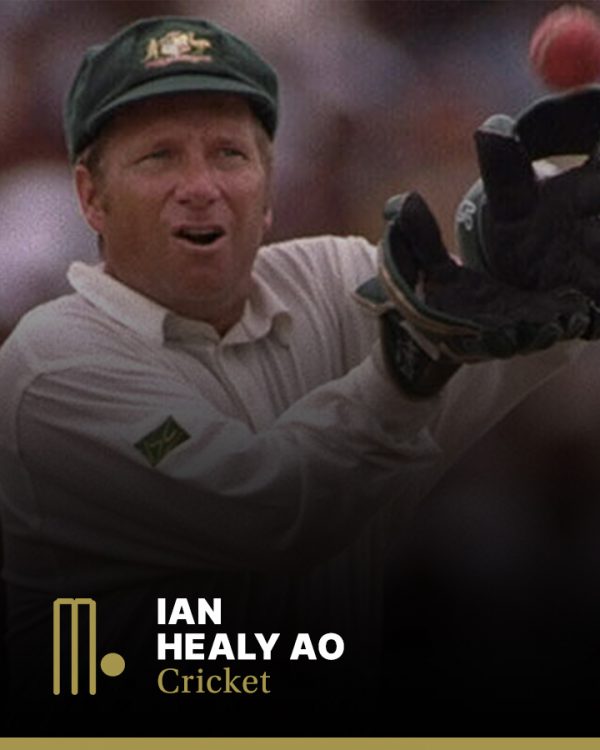 For ten years, Ian Healy was the pulse of the Australian cricket team. An excellent wicket keeper and useful right-handed lower middle-order batsman, Healy made his first-class debut for the Queensland state team in the 1986/87 season, as understudy to Peter Anderson.

Healy was a shock call-up to the Australian national team for the 1988/89 tour of Pakistan, having played only six first-class games to date, when it was expected more experienced wicket keepers such as Tim Zoehrer or Greg Dyer might have gone in his place. But he worked and willed himself to become the most successful wicket keeper of them all.

He had a tremendous work ethic allied to natural skill and for the next decade Healy established himself as one of the game’s top wicket keepers, playing in 119 Test matches and 168 one-day internationals from 1988 to 1999. He took 366 Test catches (second on the record list) and took 29 Test stumpings (fifth on the record list), for a current record of 395 Test dismissals. Healy captained Australia in eight one-dayers, winning five and losing three, taking 233 dismissals from 168 matches (fourth on the record list).

Although overshadowed as a batsman near the end of his career by current Australian wicket keeper Adam Gilchrist, Healy scored over 4000 Test runs at an average of 27.39, including four centuries and 22 half-centuries. He is one of only ten Australians to have played in more than 100 Tests.

He prided himself on his total involvement, in training, in team meetings, in slashing and hooking vital runs regularly, in keeping expertly to the quicks, but his signature will always be his energy and optimism behind the stumps, particularly to Shane Warne, which elevated a prosaic business into a breathtaking spectacle. He could frequently be heard on effects microphones encouraging the rest of the team, perhaps most prominently his nasally “Bowling, Warnie”, strained through pitch microphones. Notable too was his attitude to injuries; despite breaking all of his fingers during his 13 year career he only ever missed one Test match, in Pakistan, due to a broken thumb.

When Healy had Pakistani batsman Wasim Akram caught from Colin Miller’s bowling on October 4, 1998 in Islamabad, he became the most successful Test wicket keeper ever, passing Rod Marsh’s previous record with his 356th career dismissal. Healy’s highest Test batting score of 161 not out was made against the West Indies in Brisbane in 1996/97.

Healy was widely considered the world’s best wicketkeeper when he announced his retirement from cricket in 1999, and was selected as the wicket keeper in the Australian Cricket Board’s team of the 20th century ahead of greats such as Marsh, Wally Grout and Don Tallon. He was also recognised as a Wisden Cricketer of the Year in 1994.

Since retiring he has seamlessly made the move from player to commentator, as well as coaching the Somerville House cricket team.