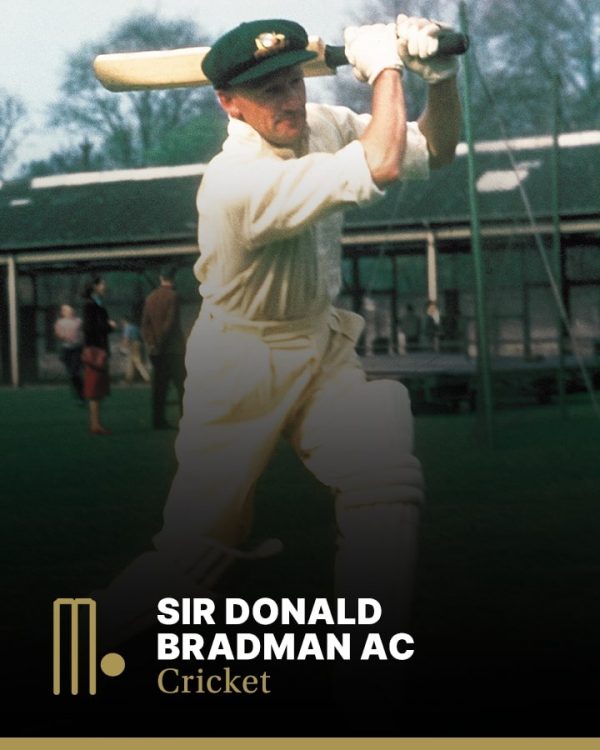 Sir Donald Bradman AC was the inaugural inductee into the Sport Australia Hall of Fame in 1985. He was inducted as an Athlete Member for his contribution to the sport of cricket and was elevated to Legend of Australian Sport in 1993.

Bradman was, beyond any argument, the greatest batsman who ever lived and the greatest cricketer of the 20th century. Only WG Grace, in the formative years of the game, even remotely matched his status as a player. After he retired, his reputation not merely as a player but as an administrator, selector, and cricketing statesman only increased.

From an early age Bradman was a sporting and active youngster. Due to a lack of organised sport and fellow children, he developed a ball game in his backyard. This unusual game involved throwing a golf ball at the round brick base of a water tank, and then hitting the ball with a cricket stump. Without knowing it, he was developing his precise co-ordination and skill that would serve him so well in the years ahead as an international cricketer.

At the age of twelve he was invited to play for the senior school team and in his second game he scored 115 not out from a team total of 150. He also took eight wickets.

On weekends, Bradman acted as scorer for the Bowral team (in country New South Wales) which included his father, brother and two uncles. One day the team was short a player and he was sent in at the fall of the eighth wicket scoring 37 not out. For the return innings, the following Saturday, on the Glebe wicket (Bradman Oval) he scored 29 not out. As a reward for his fine effort, a Bowral team member gave him his first cricket bat.

In February 1921, Bradman begged his father to take him to Sydney to watch his first Test match, the fifth Test between England and Australia at the Sydney Cricket Ground (SCG).

Aged 17, Bradman had developed into a serious cricketer for the Bowral team. He continued to bat high scores, take wickets and hold catches, making an enormous impact in the Berrima District competition. The final between Bowral and Moss Vale was held over five consecutive Saturdays and saw Bradman finish with a total of 300 runs.

In October 1926, the state selectors invited Bradman to a cricket trial in Sydney at the SCG. Because he was used to playing country cricket on concrete and dirt pitches, his footwork was considered to be slow. He soon adjusted to the grass wickets.

Soon after the trial, he was invited to play for the Southern team in a Country Cricket Week in Sydney. During that week he agreed to play for the St George Cricket Club if they paid his train fare from Bowral. Each Saturday, he had to get up before 5am to catch the train from Bowral to Sydney, often not getting home until midnight.

By 1928, Bradman was one of the most talked about cricketers and was selected to play Test cricket for Australia against England in Brisbane. However, the Australians did not bat well. The hot humid and rainy weather produced a sticky wicket which they had not played on before. This resulted in poor batting scores and they lost the first Test.

Due to his poor batting score he was only included as 12th man for the second Test to be played in Sydney. This was the only time that Bradman was not selected in the Australian cricket team for the next twenty years. Bradman was then selected to play in the third Test in Melbourne, where he played brilliantly, becoming the youngest player to score a Test century with 112 in the second innings.

Bradman reached the scoring peak of his career in a Sheffield Shield match between NSW and Queensland at the SCG in January 1930. It was during this match that the 21 year old broke the world batting record for the highest score in first-class cricket by smashing the previous record held by Bill Ponsford of 437. Bradman scored 452 not out in just 415 minutes. Ponsford took 621 minutes to reach his score. He made a total of one thousand runs for the season.

In his first ever match in England (at Worcester) during the 1930s Ashes tour, he scored 236, making him the youngest overseas player to score a double century in England. In the first Test he scored 131 followed by 254 in the second Test at Lord’s. In the third Test at Leeds, Bradman broke the world Test batting record with 334, scoring 309 runs in a day. In the fifth Test he scored 232 to have a series Test aggregate of 974 at an average of 139.14. Australia won the series 2-1 but Bradman’s phenomenal success sewed the seeds for Bodyline. Bradman was only 21 and on his return to Australia, he was showered in publicity.

The 1932/33 England captain Douglas Jardine recorded that he saw Bradman flinch once or twice at short deliveries during the 1930 series. He instructed his two opening bowlers Harold Larwood and Bill Voce (both from Nottinghamshire) to bowl what he called ‘leg-theory’ (later Bodyline).

This bowling partnership bowled Bodyline at regular intervals during the 1932/33 series. It was not a popular decision with Australian crowds who loudly heckled the Englishmen. Australian batsmen, especially the openers, Fingleton, Ponsford and Richardson were struck many painful blows much to the crowds’ displeasure. Bradman was only hit once, on the upper arm, but spent much of his time avoiding the ball at the expense of making runs. The tactic was working. In the end, England won the series and blunted Bradman to a Test series average of ‘only’ 56.57 runs per innings.

The 1934 Australian tour to England featured no Bodyline bowling and relations between the two teams quickly healed.

In 1935 Bradman moved his family to South Australia and was appointed captain of the South Australian team and state selector. In December 1935 he scored 117 in his first Sheffield Shield match for SA, against his former team, NSW. He was appointed Test selector in 1936 and on December 4, led his country for the first time in the first Test at Brisbane.

Bradman was elected to the Australian Cricket Board in August 1945. He had not played cricket for five years and did not expect to play for Australia again because of severe muscular spasms. He did however accept the Australian captaincy in 1946 in an effort to help a post-war recovery.

In 1947/48 India visited Australia for the first Test series between the two countries. Bradman scored 172, his 100th first-class century at the SCG. Australia won the series 4-0 with Bradman’s batting average 178.75. During the tour Bradman announced that the forthcoming tour to England would be his last.

In March 1948, captained by Bradman, the Australian team sailed for England. Their tour was to end some eight months later where the Australian team, not having lost a single match, was dubbed ‘The Invincibles’ – the greatest Australian side in history to leave our shores. The team surpassed all records by winning four out of the five Tests and remaining undefeated throughout the tour. They remain the only side not to lose a match on tour.

Bradman’s last Test match appearance in the fifth Test against England at the Oval in 1948 has probably become one of the most talked about moments in cricket history.

Bradman came out to the crease for his last Test match amidst a thunderous ovation which lasted several minutes. He was bowled a ‘googly’ by Eric Hollies on his second ball, misjudging the ball and thus was out for a duck.

Bradman missed a Test total of 7000 runs by just four, (finishing with 6996 total Test runs), which would have given him a Test career average of 100, instead his average was 99.94. Keith Miller was in the dressing room when Bradman returned from the crease, and according to Miller, when Bradman was unbuckling his pads, he simply said “Gee whiz, fancy doing that!”

The 1948 tour was a fine finale for Bradman. He enjoyed captaining an undefeated team that many would consider the strongest side to ever take the field. He felt he was leaving the Test arena with Australia in a strong position.

Bradman captained Australia 24 times, winning 15 matches and losing three. He scored 28,067 runs in first-class cricket at an average of 95.15, with a top score of 452 not out. He made all his runs at high speed in a manner that bewildered opponents and entranced spectators. Though his batting was not classically beautiful, it was always awesome.

In 1949, Bradman was knighted, becoming the first Australian cricketer to receive a knighthood and the first Test cricketer honoured in such a way. In 1979 he received a Companion of the Order of Australia (AC) for his services to cricket and cricket administration. In 1996 he was inducted into the Australian Cricket Hall of Fame.