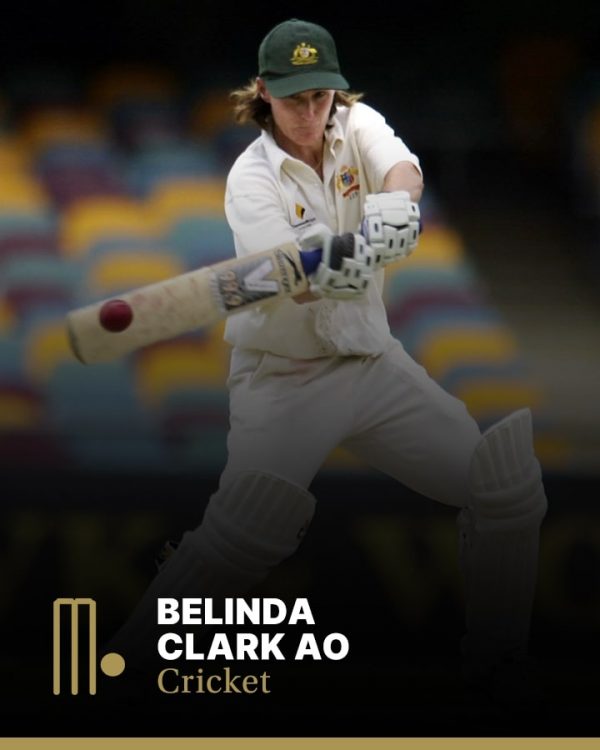 Belinda Clark AO was inducted into the Sport Australia Hall of Fame in 2011 as an Athlete Member for her contribution to the sport of cricket.

Belinda Clark was a prolific, right-handed, opening batter who, across her career amassed 919 Test runs at an average of 45.90 and 4,844 One Day International (ODI) runs at 47.49. At just 23 years of age she was appointed Captain of the Australian Women’s Cricket Team in 1994 – a position she held for eleven years which included victorious ICC Women’s World Cup tournaments in 1997 and 2005. She holds the record for most matches as Captain of the Australian Team (101 games at a winning rate of 83%) and remains the only Australian in cricket history to score a double century in an ODI innings. In domestic competition, Clark won five Women’s National Cricket League (WNCL) championships with New South Wales and two with Victoria.

Clark is widely considered a pioneer of women’s cricket and one of the greatest female players to play the game. She was the first woman to be inducted into the Australian Cricket Hall of Fame and the second ever into the ICC Cricket Hall of Fame, with her accomplishments on the field matched by her contribution of it through her efforts to grow the game as an administrator on the Executive at Cricket Australia and as a member of the ICC Women’s Committee.

Clark was born in Newcastle, NSW, and, before learning that women could represent Australia playing cricket, dreamt of winning Wimbledon. Throughout her childhood, she honed her hand-eye coordination by hitting a tennis ball against the family’s garage door and played her first game of cricket as a 13-year-old for her high school team. She showed early promise and a natural run-scoring ability through school and in local competitions, and secured her first Australian cap in 1991, as a 21-year-old.

She made her ODI debut against New Zealand at Tasmania’s Bellerive Oval where she scored 36 in Australia’s eight-wicket win, then, less than two weeks later, made her Test debut at North Sydney Oval where she scored a century (104) in a drawn match against India. The Australian team were known as winners throughout the 1990’s, however, after an uncharacteristically poor World Cup performance in 1993, team selectors made sweeping changes – they axed several senior players, appointed a new coach who brought a revitalised style of attacking play, and turned to Clark, who was appointed Captain, to lead the team into a new era. Clark’s team blossomed under her leadership and embarked on a golden period of success that included an early 374-run ODI win against Pakistan that was inspired by her 97-ball 131. The team travelled to New Zealand a week later and Clark’s form continued into that away series – in the second ODI she smashed 142 in a win against the hosts, which remains a performance Clark hold among her best.

Clark took her performances to another level at the 1997 World Cup. She kickstarted the tournament with 93 not out in a 10-wicket win against South Africa then made history when she scored 229 not out in her next innings to become the first Australian (male or female) to score a double-century in an ODI innings. In the World Cup Final at Eden Gardens against New Zealand, she top-scored with 52 in a successful low-target chase that delivered Australia their third World Cup. Clark finished the 1997 with an astonishing 970 runs which remains a Women’s ODI record for most runs scored in a single calendar year.

In 1998, during the drawn Third Test of Australia’s 1998 tour of England, Clark scored her second Test century – a career best 136 – and on Day 4, claimed her first and only Test wicket when she dismissed Barbara Daniels. Between 1998 – 2000 Clark guided her Australian team to a then record 17-consecutive ODI victories – before back-to-back losses against trans-Tasman rival New Zealand – then another 16-match ODI winning streak that included a comprehensive 220-run defeat of England in Clark’s hometown of Newcastle, where she scored an unbeaten 146 not out. In the 2000 World Cup Final, Clark was named Player of the Match after an innings of 91, unfortunately it wasn’t enough to secure victory as Australia fell an agonising five runs short of back-to-back World Cup wins.

Despite some indifferent form during 2001, Clark captained Australia to a 2-0 Women’s Ashes victory against England, before a return to her typically dominant form in the 2002/03 World Series of Women’s Cricket where she blasted three half-centuries, that culminated in a match-winning 89 against New Zealand in the Final. Then, just a week later at the Gabba in Brisbane, she scored a match-high 47 that steered her team to a trophy-retaining five-wicket win that capped off an enthralling contest that saw Australia bowled out for just 78 on Day 2.

In what can be considered her most significant innings of the 2005 Women’s World Cup, Clark scored a defiant 62 against England in the semi-final. The innings guided her team to a win and into the Final against India, which Australia won comfortably by 98 runs to secure their fourth World Cup, and second under Clark’s leadership.

After an international career that spanned 14 years, following Australia’s 2005 Women’s Ashes loss to England, Clark announced her retirement from all forms of cricket with a record that, especially given the lack of opportunity for female cricketers throughout the 1990’s, stands as not only one of the great female records of all time, but one of the great cricketing records of any player, male or female, to have played the game.

Her Test record of 919 runs – including six 50’s and two 100’s, and a high score of 136 – in just 15 matches and her ODI record of 4,844 runs – that includes thirty 50’s and five 100’s, and a high score of 229 not out – in 118 matches makes her more than deserving of the honour of being named the first female inductee into the Australian Cricket Hall of Fame and the second female inductee to the ICC Cricket Hall of fame.

In retirement Clark has worked with the Women’s Cricket Association and Cricket Australia to further the women’s game and was the manager of the Australian Cricket Centre until 2017, before she moved into the Executive General Manager of Community Cricket role for two-and-a-half years, before she stepped down in 2020. She also served as member of the ICC Women’s Committee for over a decade and was appointed Director of the ICC T20 World Cup 2020 Organising Committee.