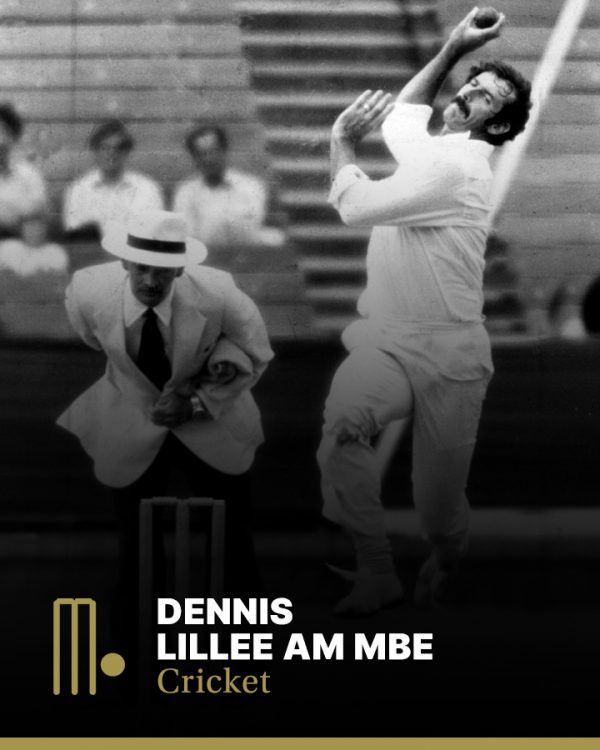 Dennis Keith Lillee AM MBE was inducted into the Sport Australia Hall of Fame in 1985 as an Athlete Member, and elevated to Legend of Australian Sport in 2021 for his contribution to the sport of cricket.

Lillee was widely regarded as the most accomplished and consistently hostile fast bowler of his time. Equipped with athletic prowess, a fierce temperament and an untamed primal force, the magnificent opening bowler was a beacon of inspiration amid triumph and controversy within the sport-crazed nation of Australia during the 1970’s and 80’s.

The Western Australian native burst onto the cricketing scene during the 1969/1970 season, making his domestic cricket debut as a 20-year-old with a raw and erratic bowling action that generated alarming pace; impressing the likes of Australian cricket champions Rod Marsh and Bill Lawry.

Lillee would go on to terrorise batsmen around the world during an illustrious 13-year career with his own variation of leg cutters, hooping outswingers, deceiving bounce, and lethal pace. However, his career was not without its setbacks. He suffered a debilitating back injury in 1973 against the West Indies, resulting in a prolonged absence from his beloved sport. Despite a gloomy prognosis, Lillee embarked on a comeback, putting himself through a gruelling strength and conditioning regime. He also remodelled aspects of his bowling run-up and action which were causing immense stress on his body. The new and improved Lillee returned in 1974, spearheading the nation’s bowling attack with counterparts Jeff Thomson and Max Walker. He immediately picked up where he had left off, continuing to exploit and outwit batsmen all around the world.

Dennis Lillee’s volume of accomplishments were so considerable that it is difficult to easily summarise his career. He was a key player in Kerry Packer’s World Series Cricket and his impact on the game – and on society – made him a true legend of Australian sport.

Lillee was the trump card Australian cricket had yearned for. He led WA’s attack in his 1969/70 debut season, with 32 wickets in eight matches at an average of 22.03 – with the best figures of 7/36. He finished fourth in the domestic competition, trailing to proven quicks Alan Thomson and David Renneberg and deceptive spinner Terry Jenner. Lillee continued his stellar first-class form, taking 18 wickets at an average of 16.44 during his first international tour of New Zealand in 1970 with Australia’s B Team. His performances were so impressive that a national call-up seemed inevitable.

During the 1970/1971 Ashes Series, Lillee was selected for the Sixth Test and he grasped the opportunity with both hands. The tearaway quick took a remarkable 5/84 off 28 eight-ball overs against a proud England team which included the likes of Geoff Boycott and John Edrich. This exceptional debut against a high-calibre opponent set a warning for batsmen around the world.

The power Lillee possessed over his rivals – and in his broad shoulders – is best represented in his performance against the Rest of the World XI team in Perth during 1971/1972. Lillee claimed an extraordinary 8-29 against a team containing cricketing greats Garry Sobers, Clive Lloyd, Rohan Kanhai and Sunil Gavaskar.

But just when he looked to be at the peak of his powers, a sharp pain in his back in the 1972/73 series against Pakistan caused him some trouble. In true Australian fashion, he continued to bowl, but on a tour of the West Indies he was diagnosed with a debilitating stress fracture in his lumbar vertebrae. His back was in plaster for more than a month with Lillee requiring extended leave from cricket as well as a gruelling physiotherapy regime.

The newly refined Lillee returned to cricket in 1974/1975 determined to dispel the view that his career was over. He did so with devastating impact in tandem with up-and-coming fellow speedster, Jeff Thomson. The fearsome pair took Australian cricket to places not seen since the days of the ‘Invincibles’ of 1948, with Lillee claiming 25 wickets and Thomson 33.

Lillee claimed eight wickets in five matches during the inaugural 1975 World Cup, including 5/34 against Pakistan at Leeds; becoming the first player to take a five-wicket haul in One Day International cricket.

Returning to the Test arena against England following the conclusion of the World Cup, Lillee found little challenge in the transition from One-Day cricket to Test cricket. He claimed 21 wickets in the victorious 4-Test series. The summer of 1975/1976 produced similar results with Lillee again showing the world the range of his capabilities, taking 27 wickets at an average of 26.37 against the West Indies in Australia.

If Lillee wasn’t already feared enough, the unshackled version of him struck fear in any opponent he came up against. This reinvigorated version stepped up a gear when injury struck his fast-bowling partner, Thomson, in the 1976/1977 season, forcing an increased workload which he took in his stride. He responded with 47 wickets over the next six Test matches, which included match figures of 10/135 against Pakistan at the MCG and 11/123 in Auckland against New Zealand.

His most decisive performance came in the Centenary Test of 1977 against England when his match figures of 11/165 ultimately lead Australia to victory to a historic 45-run win.

Lillee became Australia’s most marketable player. Enter World Series Cricket – a revolutionary idea that ultimately transformed cricket to what it is today. Created by media tycoon, Kerry Packer labelled Lillee as one of the faces of the competition, and his fast bowling superstar did not disappoint. He went on to play 14 World Series Cricket matches, taking 67 wickets at an average of 26.87. That included four five-wicket hauls; none of which are included in his overall Test record. He was dominant throughout World Series Cricket and claimed astonishing match figures of 9/56 off 29 overs – including 7/23 off 14 overs in the second innings – of a Super Test against a powerful West Indies team comprising Gordon Greenidge, Viv Richards, Laurence Rowe, and Clive Lloyd. Once again, he secured a truly memorable victory for Australia.

Lillee’s best Test figures were achieved in a remarkable match against the West Indies in 1981. To the delight of the MCG crowd, he sent opener Desmond Haynes and night-watchman Colin Croft back to the pavilion late on day one, and then bowled Vivian Richards to leave the tourists reeling at 4/10 at stumps. Lillee passed Lance Gibbs’ Test wicket-taking record with Larry Gomes’ dismissal the following day, and he ended up with 7/ 83 in the first innings and 10 wickets for the match. Australia recorded a famous upset win against the star-studded Windies.

A knee injury forced a premature end to Lillee’s career in 1984. He left international cricket on top of the world as the leading Test wicket taker (355), topping the bowler/fielding combination record with wicketkeeper Rod Marsh (95 dismissals) and recognised by many as Australia’s greatest fast bowler.

Beloved by fans around the world, he found solace in retirement by coaching and mentoring upcoming fast bowlers of Australia.

Dennis Keith Lillee redefined the art of fast-bowling; setting new standards for fitness, competitiveness, and hard work in the process. He personified the Australian spirit and is undeniably a Legend of Australian sport.

“His big side-on action with the sweatband, the way he used to wipe his finger across his forehead to flick off the sweat… he epitomized the fast bowler, aggressive, in your face, never back down, bowl all day attitude… he was my hero and still is.”  SAHOF Member, Glenn McGrath.