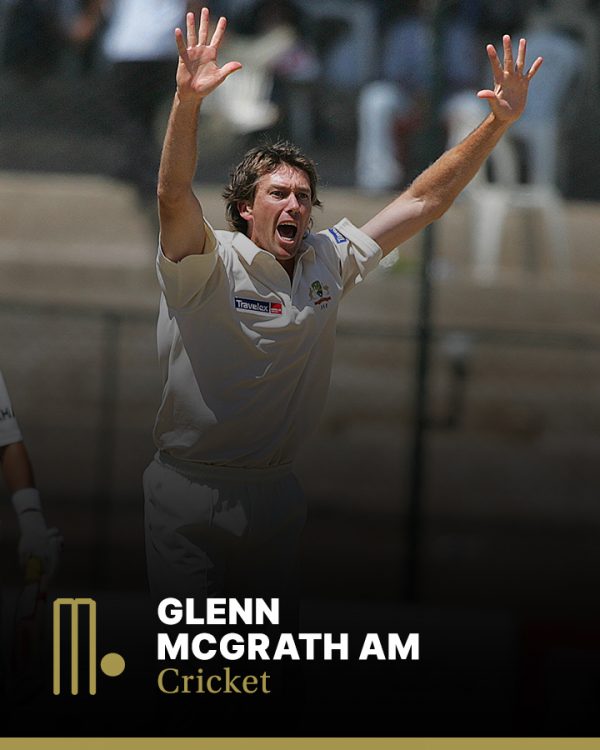 Glenn McGrath AM was inducted into the Sport Australia Hall of Fame in 2011 as an Athlete Member for his contribution to the sport of cricket.

McGrath remains one of the most successful fast bowlers in the history of international cricket, with 563 wickets from his 124 Test appearances at the economical average of 21.64. He took a further 381 wickets in his 250 one day internationals. He was named the Wisden Cricketer of the Year 1998, won the Alan Border Medal as Australia’s outstanding cricketer in 2000 and remained a formidable competitor to the end, being voted player of the series in the 2007 ICC World Cup, his final international competition. Post retirement he has set up the highly successful McGrath Foundation to raise awareness of breast cancer.

Glenn McGrath was born in Dubbo, NSW on Feb 9, 1970 but the family then moved to Narromine were he began his cricket career. The lanky fast bowler attracted the attention of former Test great Doug Walters and moved to Sydney to play grade cricket with Sutherland. In 1992 he was selected for the NSW State team and after just eight first class matches was called up in November 1993 to make his Test debut against New Zealand. It was to be merely the first of 124 Test caps. Glenn McGrath was never an express bowler, but his accuracy and relentless pressure brought a steady flow of wickets and he was one of the stars who kept Australia at the pinnacle of world cricket for much of the 90s and early 2000s.

His batting was pursued with the same enthusiasm but less success, with 641 runs in total for an average of 7.36.

In One Day Internationals he was equally effective as a bowler, his final record reading:
Matches 250
Balls bowled 12970
Wickets 381
Average 22.02
Five wicket hauls 7

His ODI batting record reads 115 runs for an average of 3.83. He also played 14 games for English Country side Worcestershire, taking 80 wickets at an average of 13.1 and he later played four games for Middlesex in 2004 taking nine wickets.

Bowing out at the Top

Like many great sportspeople, Glenn McGrath continued to hone his talent throughout his career. He brought up his 500th Test wicket in the First Test at Lords in 2005 in a superb spell of bowling which saw him take five wickets for two runs and which paved the way for an Australian victory. Injury interrupted his performances in the rest of the series which England won 2-1, but in his final Test series against England in 2006-7 he claimed 21 wickets. He took a wicket with his last ball to seal Australia’s 5-0 series win and was given a hero’s farewell by the crowd as he left the SCG for the last time as a Test player. His final act was to be player of the series, taking 26 wickets in helping Australia to victory in the World Cup.

Glenn McGrath and wife Jane set up the McGrath Foundation to combat breast cancer after Jane was diagnosed with the illness. Jane eventually succumbed to the disease but Glenn McGrath harnessed the support of the cricket community and telecasters to the cause and it continues to raise millions of dollars for cancer research.