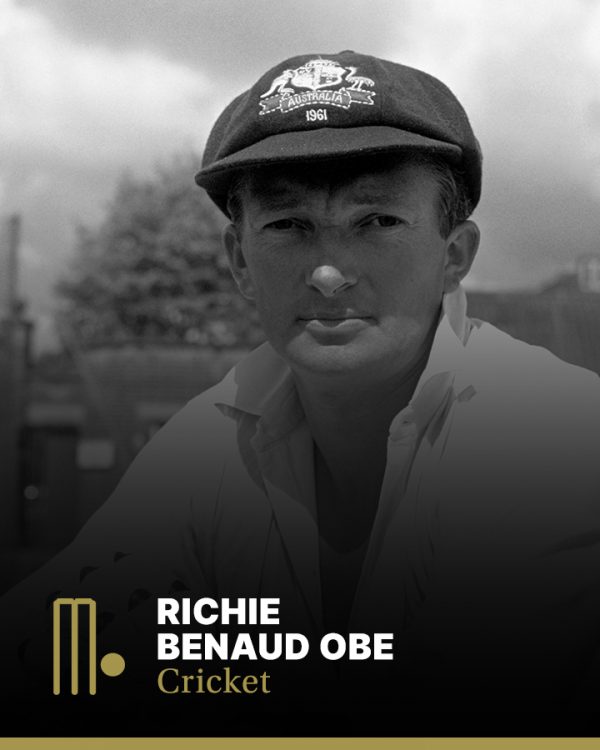 Richie Benaud OBE was inducted into the Sport Australia Hall of Fame in 1985 as an Athlete Member for his contribution to the sport of cricket and was elevated as a Legend of Australian Sport in 2018.

Benaud was an inaugural Member of the Sport Australia Hall of Fame and widely considered a national treasure due to his enormous, lifelong contribution to cricket as a player and Test captain, then later his contribution across all forms of media. He was widely regarded as one of the most influential people in the game’s history and, until his passing in 2015, was second only to Sir Donald Bradman as the most influential and recognisable doyen of the Australian game. He was equally famous and admired around the world as he forged his reputation as an excellent all-round player – he the first to complete the double of 2000 runs and 200 wickets – and enhanced it as a successful and daring captain in 28 matches in which he insisted on aggressive, entertaining play which re-energised the game.

Later, he became an outstanding television commentator, internationally syndicated newspaper columnist and author of many books, which established him as one of the wisest and most authoritative voices in cricket or any other Australian sport.

Regarded as one of Australia’s greatest cricket captains and finest all-rounders, as well as one of its most recognisable personalities, Richie Benaud captained Australia in 28 Tests, and never lost a series.

The finest leg spin bowler of his era, Benaud proved himself a match winner on numerous occasions. He made his Sheffield Shield debut at the age of 18, and played his first Test aged 21 in the 1951/52 series against the West Indies. From that time onwards, he steadily developed into one of the legends of the game.

Upon being newly appointed captain, Benaud led Australia to regain the Ashes in 1958/59 after they had been lost to England in the preceding three series, and then successfully defended them twice.

His greatest bowling performance came when he took 6/70, giving Australia victory against England and retention of the Ashes at Old Trafford in 1961.

Richie Benaud’s records in the game of cricket speak for themselves. He is one of a rare group of Australian cricketers to have both scored 10,000 runs and taken 500 wickets in first-class cricket. In 1963, he became the first player in the history of the game to achieve the Test match ‘double’ of 2000 runs and 200 wickets.

After retiring as a player in 1964, Benaud went on to become a leading cricket broadcaster and writer, as well as part of the fabric of the game and its changes, from Tests to the turbulent World Series era and beyond.