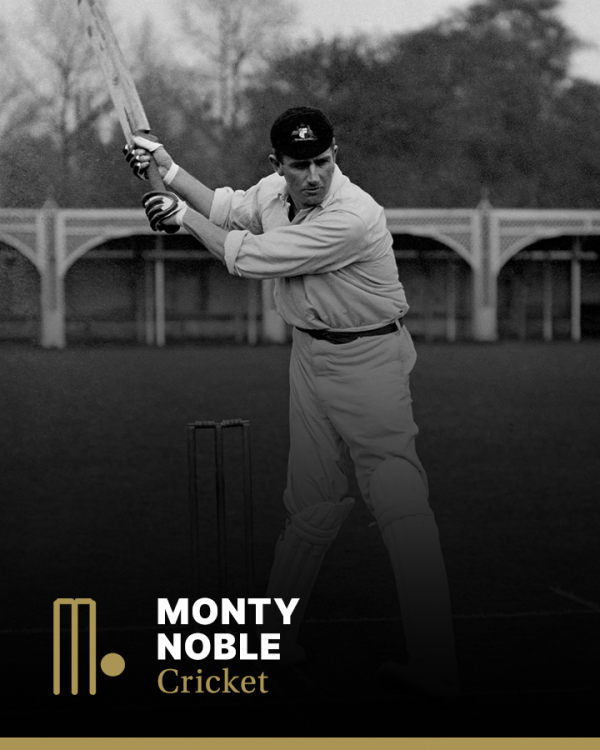 During his long career, Monty Noble showed exceptional ability in every detail of the game, and by many people was regarded as the greatest all-round cricketer of the time. He excelled as a batsman, bowler, fieldsman and captain, notably in placing his field to block a batsman’s favourite strokes. His bowling was medium-pace with plenty of spin and cleverly concealed change of pace, and he was one of the earliest Australian bowlers to be successful with the swerve.

Noble made his name in junior cricket and went to New Zealand with a New South Wales team in 1893, while in the following season he scored 152 not out for Sydney Juniors’ against Stoddart’s English team. That performance secured Noble a trial in the NSW XI, and he gradually established himself as a cricketer of outstanding merit. He remained a notable figure in Australian cricket until 1920, when he retired, having scored 13,975 runs and taken 624 wickets in first-class matches. His Test record stands at 42 Test matches, 1997 runs at an average of 30.25, however he only scored one Test century. He took 121 Test wickets at an average of 25.

Already mature on his first of four trips to England in 1899, at 26 years of age, he brought a reputation which he upheld at once with an innings of 116 not out against South of England. From start to finish of the 1899 tour Noble enjoyed exceptional success with the bat, impressing English critics chiefly by his self-control and indifference to fatigue after long spells at the crease. He triumphed at Manchester in the fourth Test, scoring 60 not out in the first innings from three hours on the crease, and 89 in the second innings from five hours twenty minutes at the crease (he did not get a run during 45 minutes in his second innings). His prolonged effort contributed largely towards Australia avoiding defeat.

During the 1902 tour he made his highest score in England – 284 at Hove against Sussex, he and Warwick Armstrong put on 428, then a world record, for the sixth wicket. He stood out among his colleagues with 1416 runs, average 32.93, and 98 wickets at less than 20 runs apiece.

Under Noble’s lead, Australia lost the 1903/04 series 3-2 and the 1905 series 2-0. But they recovered the Ashes in 1907/08 with a triumph over the touring team 4-1. Australia maintained their supremacy in 1909, when Australia went 2-1 up in the series. Then came a great example of bold, shrewd tactics. Winning the toss at Lord’s, Noble gave England first innings under favourable batting conditions, and his enterprising venture upset a badly chosen eleven. The England batting was poor and catches were dropped. Australia won by nine wickets.

His most notable bowling performance for Australia against England was in Melbourne in January 1902. In the first innings he dismissed seven men for only 17 runs, and six in the second innings at 10 runs apiece — 13 wickets in the match at 77 runs.

Unable to continue a banking career when occupied so much with first-class cricket, Noble qualified in dentistry. As a lecturer on cricket he gained wide popularity in Australia and in his later years he became well known as a broadcaster and commentator on important matches. He wrote several books on cricket including ‘Gilligan’s Men’ (1925), ‘The Game’s the Thing’ (1926), ‘Those Ashes’ (1927), and ‘The Fight for the Ashes’ (1929).