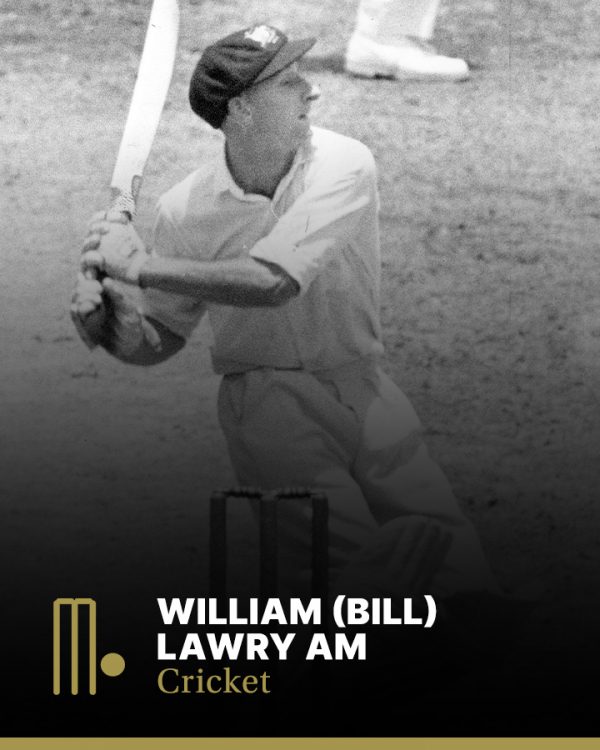 William ‘Bill’ Lawry AM was Inducted in The Sport Australia Hall of Fame on Thursday 9th October 2014 as an Athlete Member for his contribution to the sport of cricket.

“It’s all happening” is the catchcry Bill Lawry has made famous as a cricket commentator -but it could equally apply to his own illustrious career.

For a man best known for his patient accumulation of runs, William Morris Lawry has racked up a remarkable number of headlines — and achievements.

He began his first class career with Victoria at the age of 18 in the 1955-56 season and attracted national attention in 1959-60 when he played in all 10 of Victoria’s interstate matches with an impressive average of 44.40. That earned him selection in the Test side to tour England the following year.

He finished that tour heading the aggregates with 2019 runs at an average of 61.8, but it was his maiden Test century at Lords that created his reputation. With the ball flying about thanks to an infamous ridge on the pitch Bill Lawry batted for six patient hours to compile 130 and set up a famous Australian victory.

In the years that followed he and Bob Simpson forged one of Australia’s great opening partnerships.

Bill Lawry was appointed Australian captain in 1968 and led the Australians on their tour of England in 68-9. He reached perhaps the zenith of his batting career in the subsequent series against the West Indies when he scored 667 runs in five tests at an average of 83.38 and played a big part in Australia’s success.

His final triumph came in 1970 when he led Australia to a rare 3-1 series win in India. That success was overshadowed by the controversy that followed when Lawry wrote a number of newspaper articles criticising India’s Board of Control for Cricket. This led to an angry response from Indian officials. To soothe matters Australian officials expressed their “appreciation of the high level of hospitality” accorded by India.

The timing of this discord left Lawry vulnerable because his own form had been patchy and there had been criticism of his defensive tactics. The following year, midway through the series against England, Lawry was controversially dropped -making him the first Australian captain to be axed in such circumstances.

Adding to the controversy he was not forewarned -learning of his humiliation through the media.

He never played for Australia again. His Test record stands at 67 Tests for a total of 5234 runs at an average of 47.15 including 13 centuries.

Bill Lawry was however to forge a new 40 year career as a cricket commentator, most notably with the Nine Network. Millions of Australians who never saw him play will long remember him for his on screen presence. Bill officially retired from professional commentating on 16th May 2018.