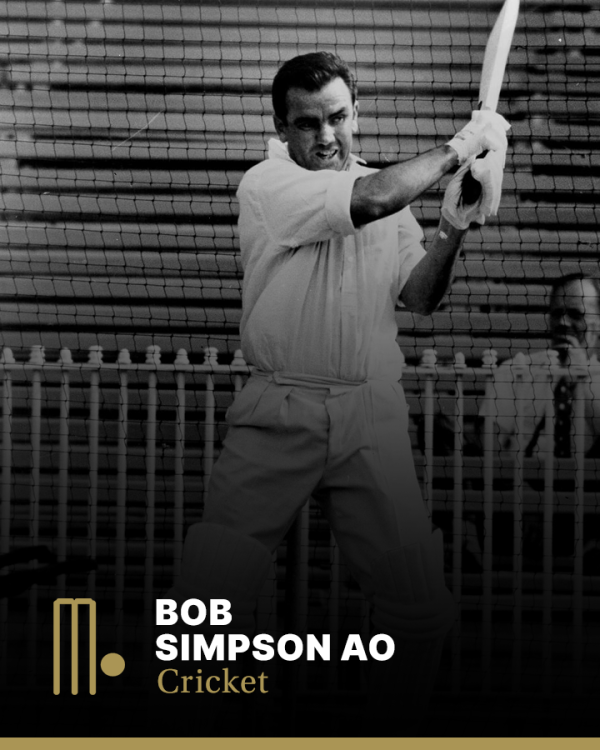 Robert ‘Bob’ Simpson AO was inducted into the Sport Australia Hall of Fame in 1985 as an Athlete Member for his contribution to the sport of cricket.

Originally from Marrickville in New South Wales, Simpson was one of the finest all-round cricketers to play for Australia. Well known for his ability as an opening batsman, Simpson was a handy leg-spin bowler, an excellent captain and one of the finest slip fielders in the game’s history. He played his first Sheffield Shield match for NSW in 1952, and played with Western Australia from 1956 to 1961, before returning to his home state.

Simpson began his Test career in 1957/58 season, against South Africa, and ultimately retired 21 years later, in 1978. He played 62 Tests, at an average of 46.81, and captained Australia in 39 of them. He scored 4869 runs, including ten centuries, and took 71 wickets and 111 catches. His highest Test score was 311, against England at Manchester in 1964. This, quite amazingly, was his first Test century, and came after he had played in 30 Tests. 1964 was certainly Simpson’s year, making 1381 runs, which was a record at the time. He and Bill Lawry AM formed a formidable opening combination, and Simpson also brought exemplary slips fielding to his repertoire. Fittingly, he was named Wisden Cricketer of the Year in 1965.

Simpson’s remarkable career is all the more remarkable because it was broken by a ten year absence from the Test arena. After retiring at the end of the 1967/68 series against India, he made a comeback and took over the reins in 1977 after many of the top players joined World Series Cricket. He captained the Australians to a 3-2 series win over India in 1977/78 and to a series against the West Indies, which they lost 3-1.

In all, he amassed 21,029 runs at an average of 56.22 in first-class cricket, hit 60 centuries, took 349 wickets at an average of 38.07, and took 384 catches. Taking on the position of full-time coach to the Australian side in the mid-1980s, he worked with captain Allan Border AO to win the 1987 World Cup and the 1995 Frank Worrell Trophy, as well as the ultimate triumph – regaining the Ashes in England in 1989. He also coached at English county level, spending time with both Leicestershire and Lancashire.