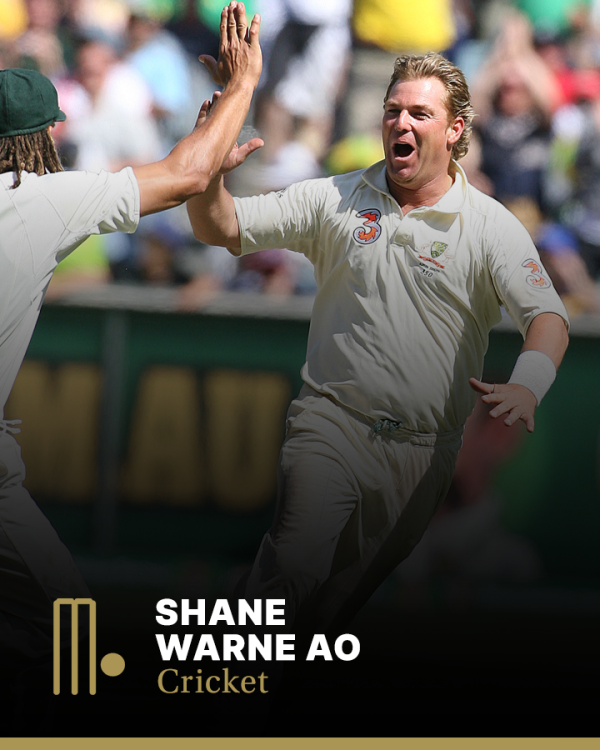 Shane Keith Warne was inducted into the Sport Australia Hall of Fame in 2009 as an Athlete Member was Elevated as a Legend of Australian Sport in 2022 for his contribution to the sport of cricket.

Shane Warne transformed and popularised the art of leg spin like no other person before him when he became the most prolific wicket-taker in Australian Test cricket history, taking an extraordinary 708 wickets from his 145 Tests, at an average of 25.41.

He took a further 293 wickets in One-Day Internationals (at an average of 25.73), with his combined Test and ODI wicket tally exceeding 1,000 – a testament to his longevity and class.

Warnes cricketing prowess was not just with the ball but also as an outstanding fieldsman in the slips taking 125 Test catches, while his hard-hitting, lower order batting saw him score 3154 Test runs at an average of 17.32

Warne’s first Test delivery on English soil would see his name etched in time with a delivery that became known as the ‘Ball of the Century.’

He finished his Test career at the SCG – the same ground where it started taking his 708th wicket in an Ashes series whitewash, capping off a record breaking career.

Many sporting champions change the landscape of the game in which they play, but only a precious few are capable of bringing about a revolution.

Shane Keith Warne was undoubtedly in the latter bracket.

Just as Don Bradman and Dennis Lillee changed cricket with their game-shaping deeds, Warne transformed and popularised the art of leg spin like no other person before him.
In doing so, he became the most prolific wicket-taker in Australian Test cricket history, taking an extraordinary 708 wickets from his 145 Tests, at an average of 25.41.

He took a further 293 wickets in One-Day Internationals (at an average of 25.73), with his combined Test and ODI wicket tally exceeding 1,000 – a testament to his longevity and class.

It wasn’t just with the ball that Warne made his mark. He was also an outstanding fieldsman in the slips, taking 125 Test catches, while his hard-hitting, lower order batting saw him score 3154 Test runs at an average of 17.32.

His most memorable batting innings also proved his most heartbreaking when he was caught on the boundary for 99 against New Zealand in 2001/02, bringing a collective sigh from those at the WACA and the millions watching around the country. Later review of the ball would show that Vettori’s delivery had been a no-ball meaning Warne sitting on 99 not out.

Warne wasn’t a cricket prodigy; it was not until he gave up on his dream of becoming an AFL player with his beloved St Kilda Football Club that he saw cricket as his pathway to success.
While he wasn’t an overnight sensation, he didn’t take long to become a star.

After only seven first-class games for Victoria, he was selected for Australia in a Test against India at the SCG in January 1992, though he gave few signs of the dominance that followed. The 22-year-old took 1/150 in a Test baptism of fire, with his sole wicket being Ravi Shastri, caught for 206 by Warne’s Victorian teammate Dean Jones.

He followed it up with 0/78 in Adelaide, so it wasn’t a surprise that he was left out of the Perth Test given his first two Tests yielded a collective 1/228.

Despite this, he was still selected for the 1992 tour of Sri Lanka, where after taking a pummelling (0/107) in the first innings at Colombo, he produced a brilliant spell of 3/11 in the second.

The slightly chunky, immensely-talented leg spinner was on his way.

Back in Australia later in the year he took 7/52 against the West Indies in Melbourne to ensure selection for the 1993 Ashes series in England, which proved his coming of age.
His one-time bowling coach, former Australian leg-spinner Terry Jenner, predicted before the start of the series that cricket was about to be transformed forever.

“I know what is going to happen here,” Jenner said at the time. “Warne will inspire thousands of kids to bowl leg-spin and you will see all the junior rep teams stocked with them.” Then he added tellingly that Warne would remain a “one off” from the production line of young leg-spinners because he was in a world of his own.

Warne’s first Test delivery on English soil at Old Trafford on June 4, 1993, ripped back viciously from well outside leg and cannoned into Mike Gatting’s off stump. It would become known as the ‘Ball of the Century.’

Gatting stood almost in disbelief at how far the ball had turned, bamboozled as countless other batsmen would be in the years ahead.

Cricket’s axis had been sharply turned on its head.

Fittingly, the moment was called by Richie Benaud, who declared: “He’s done it … he started off with the most beautiful delivery, Gatting has absolutely no idea what has happened to it.”
Warne would go on to be the leading wicket-taker of the Ashes series with 34 as the

Australians produced a memorable series win off the back of their new-found star.

Warne would turn his flipper and his fame into an extraordinary 15-year Test career with his on-field dominance and his off-field controversies ensuring maximum box-office appeal.

He would become the first player in 90 years to take a hat-trick in an Ashes series in 1994, fittingly in front of his adorning home crowd, at the Melbourne Cricket Ground.

He broke Lillee’s long-standing Australian Test wicket record of 355 in 2000 and would go on to become the first player to push through the 700-wicket barrier in his final Test series in 2007, by dismissing Andrew Strauss again at the MCG.

His 708th – and final – wicket closed out the Ashes series against England with a 5-0 whitewash as he finished his Test career at the SCG – the same ground where it started.

Among the many accolades heaped on Warne, one of the most significant came in 2000 when he was chosen as one of Wisden’s five cricketers of the 21st century. Other accolades included naming the Australia–Sri Lanka Test cricket series the Warne–Muralitharan Trophy in honour of Warne and Muttiah Muralitharan and induction onto Cricket Australia Hall of Fame in 2012 and ICC Cricket Hall of Fame in 2013.

Warne’s almost incomparable playing record, his sense of theatre, his capacity to rise to the occasion and his larger-than-life character will ensure he stands eternally among the greats of international cricket, despite his shock, sudden passing at only 52, in March 2022.

His name will forever adorn the MCG’S Great Southern Stand.

He was posthumously appointed as an Officer of the Order of Australia (AO) in 2022 for his services to cricket and his many and varied philanthropic contributions.

• 1997: Named Wisden Leading Cricketer in the World
• 2000: Named as one of five Wisden Cricketers of the Century
• 2004: 2nd time named Wisden Leading Cricketer in the World
• 2007: Australia- Sri Lanka Test cricket series name Warne-Muralitharan Trophy
• 2007: Won the Sport Australia Hall of Fame the Don Award
• 2009: Awarded life membership of Marylebone Cricket Club
• 2010: Sport Australia Hall of Fame named the Gatting Ball a Hall of Fame Moment
• 2011: Honoured with bronze statue out the front of the Melbourne Cricket Ground
• 2012: Inducted into the Australian Cricket Hall of Fame
• 2013: Inducted into the ICC Cricket Hall of Fame
• 2013: Named in Wisden all time Test World XI
• 2022: Appointed an Officer of the Order of Australia for services to cricket and philanthropic contributions
• 2022: Great Southern Stand of the Melbourne Cricket Ground named in his honour