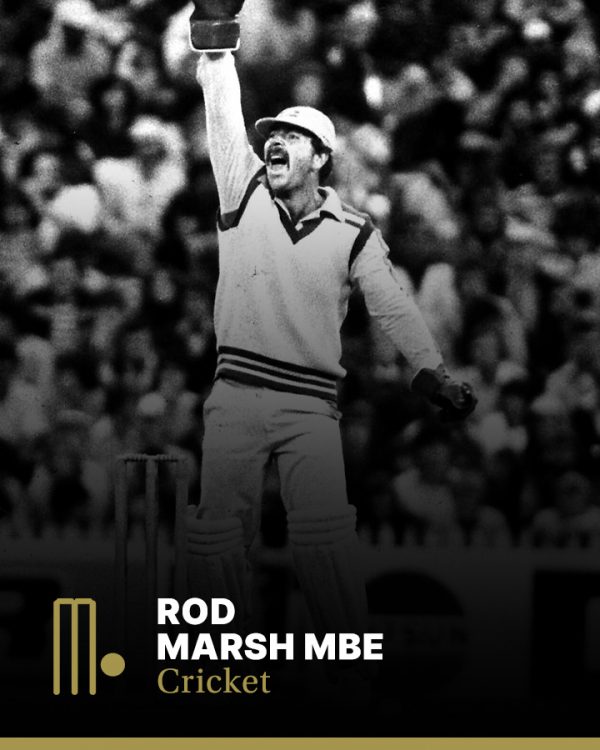 Rod Marsh MBE was inducted into the Sport Australia Hall of Fame in 1985 as an Athlete Member for his contribution to the sport of cricket.

Thick-set in build and combative in approach, Marsh remains one of the most respected wicket keepers to have ever played international cricket. During a Test career which bridged a period of 14 years until his retirement in 1983/84, he collected a then world record tally of 355 dismissals; the combination of his concentration, athleticism and highly skilled glove work earning him enormous admiration among spectators and fellow players alike. Marsh enjoyed no easy passage to the top – he was forced to cool his heels at first-class level as a specialist batsman initially and then endured strident criticism when he was promoted to the national team ahead of the popular Brian Taber – but there was little argument about his credentials in either arena thereafter.

Although he did not cut the perfect athletic figure, Marsh was nimble-footed and his capacity to move acrobatically to intercept errant deliveries and catches was a constant feature. He was an invaluable player for both Western Australia and Australia, and the inextricability of his association with the fast bowler Dennis Lillee – the dismissal “caught Marsh bowled Lillee” was recorded 95 times in Tests – is one of the legends of Australian cricket. Their prowess was recognised by the naming of the Lillee-Marsh Stand at the Western Australian Cricket Ground in Perth. In 1972 he equaled the Australian record against England with 23 dismissals and in 1975/76 he set a record 26 dismissals in a six match series.

Apart from his wicket keeping talents, he was also an excellent batsman in his own right, scoring three Test centuries, and his forceful stroke play lay at the core of many stubborn Australian lower-order performances. He made his first class cricket debut in 1968/69 against the West Indies scoring a century in the second innings for Western Australia. He was the first Australian wicket keeper to score a century in a Test match with 118 against Pakistan in 1973, 132 against New Zealand in 1974 and 110 against England in the Centennial Test of 1977. Holder of the record for the highest score by a wicket keeper against a touring side (236 for Western Australia against Pakistan in 1973/74) he was a fine tactician and captained Western Australia with great distinction. He retired after the 1983/84 season where Greg Chappell and Lillee also played their final Tests. Marsh at the time of his retirement played an Australia record 96 Test matches.

After retirement, Marsh enhanced his already glowing reputation with a fruitful stint as the head of the Australian Cricket Academy at Adelaide, overseeing players such as Ricky Ponting, Glenn McGrath and Brett Lee. Taking his talents abroad in 2002, Marsh accepted the director’s role of England’s new National Academy. A year later he was appointed an England selector, and made useful contributions to the country’s on-field renaissance. Stepping down from both roles in September 2005, he left having helped England regain the Ashes. In August 2005, the South Australian Cricket Association announced Marsh had been appointed in a consultancy role to undertake a review of cricket throughout South Australia.

In 1981 Marsh was made a Member of the Order of the British Empire (MBE) for his service to cricket.