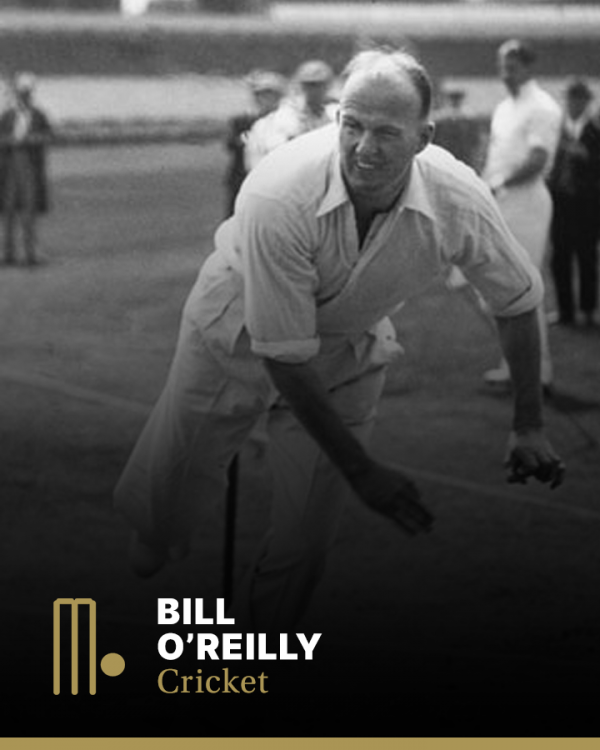 Bill O’Reilly, was probably the greatest spin bowler the game has ever produced. Bill “Tiger” O’Reilly was unquestionably one of cricket’s great figures: as a player, as a character and later as a writer on the game. His cricket was proof that spin bowling was not necessarily a gentle art. He was 6ft 2in tall, gripped the ball in his enormous right hand and released it at a pace that could be almost fast-medium. It would then bounce ferociously on the hard pitches and, on occasion, knock wicket-keepers off their feet. He bowled leg-breaks and, especially, top-spinners and googlies, backed up by an intimidating manner. Jack Fingleton said he was a flurry of limbs, fire and steel-edged temper. It has been suggested that his action and the general commotion before delivery were born of a deep sense of frustration at not being able to bowl fast enough to knock the batsman down. Off the field, his gruffness was mitigated by his intelligence, erudition, wit and twinkling eyes.

He played 27 Test matches and took 144 wickets – 102 of them Englishmen and the vital wicket of Walter Hammond ten times – averaging 22.59. But his figures have to be judged by the fact that all but one of his Tests came in the 1930s, when other bowlers were dominated by batsmen to an unprecedented extent. No one ever dominated O’Reilly. Even when England made 903 at The Oval in 1938, he bowled 85 overs and finished with 3 for 178. And before that, he had secured the Ashes by taking 5 for 66 and 5 for 56 at Headingley.

In the summer of 1925/26, the young O’Reilly, by now an undergraduate at the teachers’ college in Sydney University, met the man whose destiny was to be linked with his for ever. He was passing through Bowral Station on his way home to Wingello for his summer holiday when he heard his name being called down the platform. He put his head out of the carriage window and was told to get out at once: Wingello were playing at Bowral and needed him.

Little did he know that he was about to cross swords with the greatest cricketer of all time, Don Bradman. The story goes that Bradman didn’t have it all his own way, at least for the first few overs anyway. By the close of play, 17-year-old Don Bradman was 234 not out. The match resumed a week later, according to the local custom. O’Reilly bowled him first ball with a leg-break which came from the leg stump to hit the off bail. Suddenly cricket was the best game in the whole world.

In 1926/27 O’Reilly was chosen for the New South Wales state practice squad on the strength of one match for North Sydney. A year later he made his first-class début against New Zealand. But teachers in NSW work for the state rather than an individual school and the newly-qualified O’Reilly was dispatched to three different bush towns. This may have cost him the chance of a Test against England in 1928/29 and, very probably, a tour in 1930. He was transferred back to Sydney in time for the 1931/32 season and after four more matches made his début for Australia.

In the 1932/33 Bodyline series he took 27 wickets, without anyone noticing much, given what else was happening. In the series in England in 1934 he took 28 wickets, twice taking seven in an innings. At Trent Bridge he won the match with 7 for 54. In blazing heat at Old Trafford, he transformed the game in an over, O’Reilly finished with 7 for 189. He took 109 wickets on the tour, including 9 for 38 against Somerset. He went back to Australia and suddenly announced his retirement. However, Sydney Grammar School offered him a job that enabled him to play on. He toured South Africa in 1935/36 and took 27 wickets again, 25 in the great series against England in 1936/37 and 22 back in England in 1938, despite the unforgiving wickets of Trent Bridge and The Oval.

He played only one more Test, the one-off game against New Zealand in Wellington in March 1946 when he was 40. The opposition barely beat his age: they were bowled out for 42 and 54 and O’Reilly took 5 for 14 and 3 for 19. It was the 11th time he had taken five in an innings in Tests.

O’Reilly then began writing on cricket for the ‘Sydney Morning Herald’ with a muscular, very Australian prose style flavoured with wit and imagery. Until he finally retired in 1988, he was as revered in Australian press boxes as he had been on the field. His opinions often came more from the heart than the head, especially if it was a question of attacking the selectors for playing safe and ignoring a young player, most especially a young leg-spinner. But he was consistent, loved quality and hated one-day cricket (hit-and-giggle) which he generally refused to watch.

In his career he took 774 wickets at 16.60 and was successful at every level: playing for North Sydney and St George, he topped the Sydney grade averages 12 times and took 962 wickets at 9.44. He took a wicket every 49 balls in his first-class career and it was said he never bowled a wide. His was left-handed, hard-hitting and occasionally stubborn (1655 runs at 13.13); he never quite forgave himself for getting out at Lord’s in 1934 when he might have saved the follow-on. He did save the follow-on by making 30 not out at Old Trafford in the next Test.

When O’Reilly died, Bradman said he was the greatest bowler he had ever faced or watched.