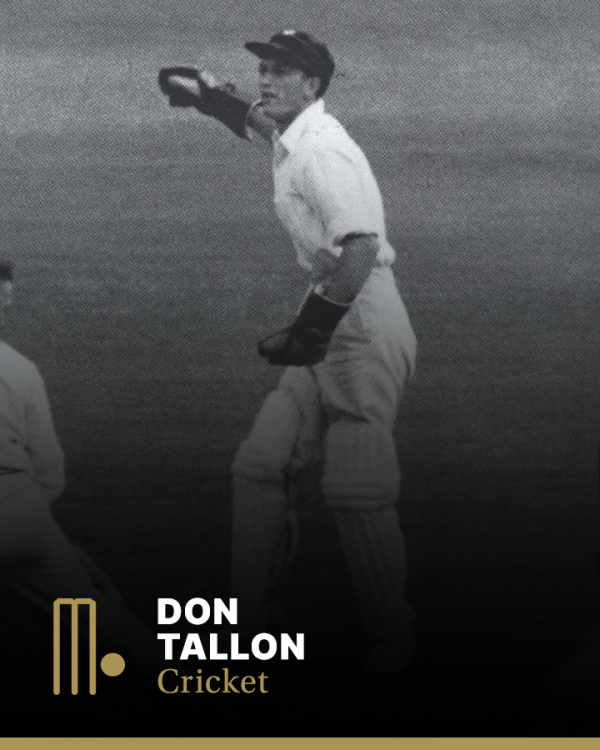 The unobtrusive way in which Don Tallon kept wickets caused much of his skilled work to go unappreciated, but critics and those who played with and against him recognised a man worthy of following such renowned Australians as Blackham, Kelly, Carter and Oldfield.

At the age of seven and when little more than stump high, the tiny Donald began to keep wickets for the school team, and when at 13 he captained Queensland Schoolboys his prowess amazed those seeing him for the first time. He played in A Grade cricket at 14, and when 16 appeared in the Queensland Country XI against the MCC of 1932/33 in Toowoomba. In MCC’s innings of 376 Tallon conceded only five byes and in the happiest day of his life he stumped Sutcliffe.

Before this he had been to Brisbane for the Country Week and created a big impression by the certainty and nonchalance with which he took the bowling of Gilbert, the aboriginal fast bowler who was afterwards no-balled for throwing. Not until he played for Queensland at 17 against Victoria in December 1933 did Tallon see a state match. He conceded only six byes in an innings of 542 and generally gave a fine performance, but the Queensland officials did not consider it advisable to take one so young on the southern tour of Victoria, South Australia and New South Wales. Tallon resumed his place on the side’s return and was first choice for Queensland ever since. As soon as his fourth match, he revealed batting powers with innings of 58 and 86 against South Australia.

When 19, Tallon was the top Queensland batsman with 503 runs, average 55.88. He enjoyed a highly successful match when he hit 193, the highest of his nine first class hundreds, and dismissed five Victoria batsmen in an innings. As he maintained his fine work both as batsman and wicket keeper in the following seasons his omission from the side which toured England in 1938 was a mystery. In the next home season, Tallon reached peak form and equalled two world records. Against New South Wales he dismissed twelve batsmen, six in each innings, a feat performed only once before, by Pooley of Surrey in 1868. A few weeks afterwards Tallon joined three other wicket keepers by disposing of seven Victorian batsmen in one innings and in the score of 348 he did not concede a bye.

But for the intervention of war Tallon undoubtedly would have been included in the team that would have visited England in 1942 and his first big chance did not come untill the unofficial Test with New Zealand in March 1946 (it was not granted Test status until 1948). The next year in his first Test series, against Hammond’s team, Tallon broke all existing records by helping in the fall of 20 batsmen. His first victim came from a stumping off O’Reilly. Moreover, his batting average of 29.00 surpassed that of the English captain. Few people who saw his 92 in the third Test at Melbourne will forget the power of his driving during a hurricane partnership with Lindwall. Tallon played in all five Tests against MCC and in the five Tests with the India next season, but through injury he missed the fourth at Leeds in 1948. He was troubled by another knock on the finger which was dislocated during the second Test of the 1946/47 series.

Having made the wicket keeping place his own against England in 1946/47, he was an integral part of Bradman’s brilliant 1948 side in England, being equally at home whether keeping to the speed of Lindwall and Miller or the spin of Johnson, McCool and Ring. He had wonderful timing behind the stumps and exceptionally fast hands when it came to taking off the bails. Perhaps his most famous catch was at The Oval in 1948, when he dived down the leg side to dismiss Hutton for 30. He caught an authentic leg-glance left-handed and at full stretch – a great finish to Australia’s splendid performance, Hutton being the last man out and England’s total a mere 52.

Tallon’s modest part as a batsman on the English tour puzzled Australians accustomed to his deeds in state cricket. Usually, however, no great necessity existed for him to make runs in such a powerful batting side but, when the occasion demanded, he showed his batting qualities, especially in his 53 in the Lord’s Test and at Bradford where he helped to pull Australia through their most anxious match.

His unavailability to tour South Africa in 1949/50 deprived him of one full series, but his Test victims numbered 58 (50 caught, 8 stumped). Tallon travelled to England again in 1953, but he was 37 by then and no longer quite the supreme craftsman he had been.

He claimed 432 first class victims, no fewer than 129 of them being stumped. Tallon’s batting record in Tests was disappointing, partly because in such a strong and all conquering Australian side runs were seldom needed from him. His best Test score was his 92 against England at Melbourne in 1946-47, when he and Lindwall added 154 for the eighth wicket. In first-class cricket he scored 6034 runs (average 29.18), in Test cricket 394 runs (average 17.13).