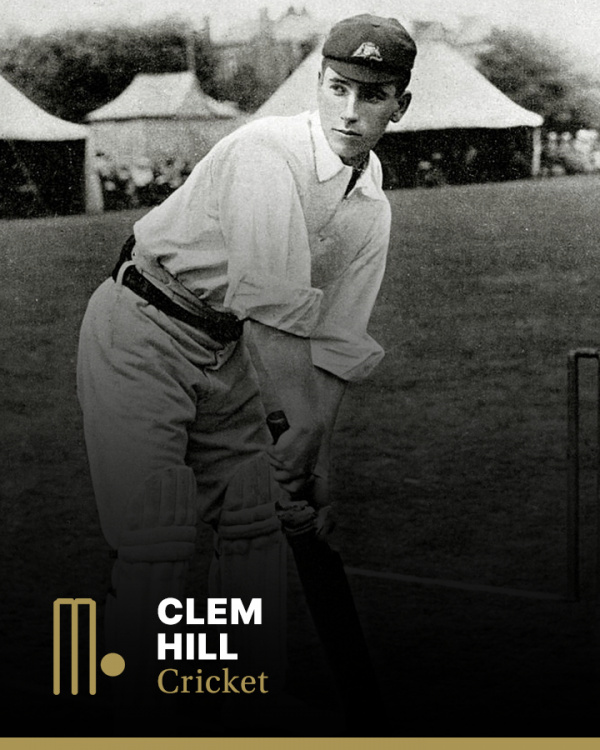 Left handed batsman Clem Hill was ranked among the finest cricketers in the world. The son of H. J. Hill, who scored the first century on Adelaide Oval, put together the remarkable score of 360 in 1893 at an Inter-College match at Adelaide at just 16 years of age. This was the highest innings hit in Australia at that time.

Soon after turning 18, Hill scored 150 not out for South Australia against England in 1895, and in 1896, he made the first of four visits to England (1899, 1902 and 1905). Third in the averages, he established himself as being worthy of a place in any eleven, and when England next visited Australia, Hill exceeded the highest expectations by scoring 829 runs in twelve innings, an average of 75. That season he scored 200 for South Australia against the visiting team, and his 188 at Melbourne in the fourth Test, when Australia began so badly losing 6 for 57, was largely responsible for a victory by eight wickets. This innings was considered the finest that Hill ever played.

Travelling to England with the side in 1899, he showed splendid form until falling ill early in July. He and Victor Trumper each scored 135 at Lord’s, sharing the chief honours in beating England by ten wickets, helping largely to win the rubber. This was the only decisive result in the five Tests. He headed the averages for the tour with 60.20.

From 1896 to 1912 he played in 49 Test matches, 41 against England, eight against South Africa; he captained Australia when South Africa visited in 1910, and in the following season against the English touring side.

Generally Hill was at his best on the important occasion, and in Test matches he scored 3412 runs; average 39. He hit seven centuries against South Africa and four against England, besides 96, 99, 98 and 97. The innings of 98 and 97 were the highest scores for Australia in Adelaide in January 1902 and, with Trumble’s all-round work, brought about the defeat of England by four wickets. These displays followed his 99 which helped in a victory by 229 runs in Melbourne.

In 1902, he was best remembered for a spectacular piece of fielding. At Old Trafford, England needed eight runs for victory with two wickets to spare when Dick Lilley hoisted a huge hit towards the square leg boundary. Hill sprinted from long-on and held the catch; Australia won the match by three runs.

A specially brilliant batsman on hard pitches, Hill scored 6274 runs, average 52.28 in Sheffield Shield matches — a record until beaten by Don Bradman. His highest innings was 365 not out for South Australia against New South Wales in Adelaide in December 1900, his average that season being 103.33. In similar matches he made 206 not out in Sydney in 1895 and 205 at Adelaide in 1909.

While able to drive hard to the off or straight, usually with the ball kept down, Hill scored chiefly on the leg side by skilful strokes perfectly timed and placed, the way in which he turned straight balls clear of fieldsmen being exceptional. Brilliant square and late cutting made Hill delightful to watch and in defence his style claimed admiration while his patience was unlimited.

More than 10 years after his Test debut, Hill was still making records. Suffering from flu and batting down the order, he hit 160 against MCC at Adelaide in 1907/08, sharing an eighth wicket partnership with Roger Hartigan that realised 243 runs, which is still an Australian Test record. And his own highest Test score was 191 against South Africa in 1910/11 at Sydney.