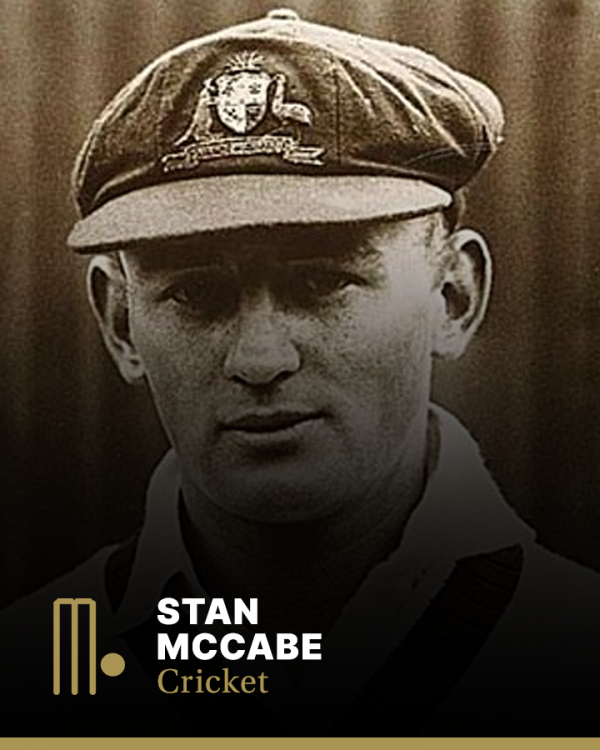 Short and stocky, with strong arms, flexible wrists and excellent footwork, he was at his best when facing bowlers of pace. Though he scored most of his runs by strokes in front of the wicket, with the drive his specialty, he also hooked splendidly. In addition, he was a useful change bowler above medium pace, and an energetic and accurate fielder. From his debut in 1930 through seven Test series, McCabe was never omitted.

He displayed an early aptitude for cricket when, after a month in the seconds team at St Joseph’s College, Hunter Hill, Sydney, he gained a place in the first XI as an all-rounder at the age of 14 and held it for three years. After leaving school, he played for the Grenfell Juniors, a country district club, and in 1928 made the first of many appearances for New South Wales.

His form for the state was such that he earned a place in Bill Woodfull’s team that visited England in 1930 when, having taken some time to become accustomed to unfamiliar conditions, he averaged 35 in the five Test matches, and in all first-class fixtures reached 1012 runs without hitting a century. In 1931/32 he enjoyed remarkable success in his three innings for NSW, scores of 229 not out against Queensland at Brisbane and 106 and 103 not out from the Victorian bowling in Sydney giving him the phenomenal Sheffield Shield average of 438. Also, that season he averaged 33.50 in five Tests against South Africa.

This ‘boy from the bush’, was a masterful technician whose stroke making was unexcelled. Although he lacked the century-making consistency of the game’s greatest, he produced the most attractive, thrilling and ultimately unforgettable trio of solo performances in cricket history.

Each innings earnt unqualified acclamation from teammates, opponents, the sporting media and the cricketing public for the breathtaking brilliance of his stroke execution and the commendable character he displayed in proving that, even in the tightest situations, attack sometimes can be the best means of defence.

Against D R Jardine’s team in 1932/33, in what is often called the body-line tour, the home team had lost four wickets for 87 when McCabe began his counter-attacking onslaught. To fireballs directed at head and body, the batsman decided to throw caution to the wind by ignoring the inner and outer ring of legside fieldsmen and playing aggressive hooks, pulls, glances and improvised deflections regardless of the risks. Four times McCabe was hit on the body during the innings. McCabe’s skill and pluck were matched by luck as lofted shots miraculously evaded fieldsmen.

He distinguished himself by hitting 385 runs in the five Tests, average nearly 43. His 187 not out in the first match of the series in Sydney was a remarkable exhibition of both craftsmanship and courage. He made his runs out of 278 in less than four and three-quarter hours, after his earlier colleagues failed, with 25 boundaries among his figures. His hooking of short-pitched deliveries by Larwood and Voce, the Nottinghamshire pair, was something which will forever hold a place in Australian cricket history.

In England in 1934, he put together eight centuries – more than any of his teammates – including 240, the highest of his career, against Surrey at The Oval and 137 in the third Test at Old Trafford.

Next season at home he became captain of NSW, which he held until his retirement in 1942. On tour in South Africa in 1935/36 he enjoyed more success, heading the Test batting figures with 420 runs, average 84. Australia required 399 to win. A turning wicket demanded skill and the rarefied air at high altitude called for energy conservation. McCabe coped on both counts, simplifying the process by literally slaughtering the bowling in an exhibition described by batting partner and professional journalist Jack Fingleton as “bordering on the miraculous”.

He hit 149 in the first test in Durban, sharing a second-wicket partnership of 161 with Bill Brown, and 189 not out in the second meeting with South Africa in Johannesburg, where he and Fingleton put on 177 together. In Johannesburg he showed his fast-scoring ability to the full by reaching 50 in 42 minutes. A worsening dust storm and failing light did not dim the McCabe brilliance but opposing captain Wade successfully appealed against the gloom because of the danger to his fieldsmen. Australia was 2 for 274 needing just 125 for victory in three hours when the match was abandoned because of rain.

Perhaps McCabe’s most famous innings was his 232 not out in the opening Test against England at Trent Bridge in 1938 which, scored at the rate of one a minute, prompted Don Bradman, his captain, to greet him on his return to the pavilion with the words, “If I could play an innings like that, I’d be a proud man, Stan”.

The innings assumed legendary status almost as soon as it finished because, by normal standards, it was so daring and magical as to be virtually unbelievable. Bradman instructed his players in the dressing room to watch magician McCabe weave his spell because “they would never see anything like it again”.

Encapsulating a situation which had players on both sides gaping in wonderment and experienced journalists groping for appropriate adjectives, McCabe, 19 not out overnight, scored 232 in 235 minutes (30 fours and one six), including 72 of a momentous last wicket partnership of 77 in 28 minutes with Fleetwood-Smith.