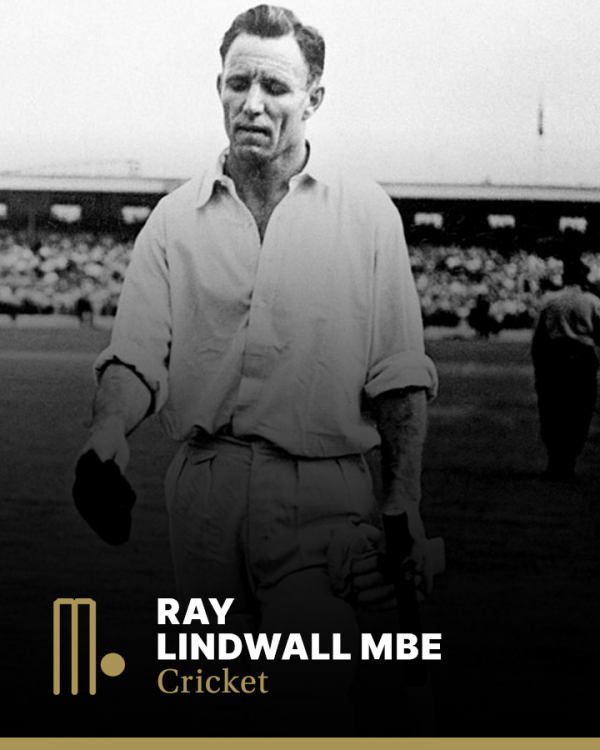 Ray Lindwall, one of Australia’s finest speedsters, was an unusual character in a very tough profession. He didn’t hate batsmen, rarely resorted to ‘assault and battery’, had a pleasant demeanor, was silky smooth in his approach and delivery yet could be lethally effective against the world’s best.

The St George, New South Wales, Queensland and Australian XI representative was accepted by players and spectators in every cricket country as the most magnificent fast bowler of his era and one of Australia’s all time greats.

Lindwall’s career in sport virtually began from the cradle. He was a natural athlete, fleet of foot and swift in reflex whose youthful talent attracted the attention of St George cricket and rugby league clubs, which he represented with rare distinction. He was a promising goal kicking full back but gave up the game after 1946 to concentrate on cricket. He played with other kids on patches of green and in the streets, prefering the street down which the great leg-spinner Bill O’Reilly walked home in the hope of catching his eye. As a junior, he was a promising batsman, scoring a double-century and a century in different junior matches on the same day. He could run 100yds in 10.6 seconds.

War was at hand when Bill O’Reilly invited him to St George and after 1941, when chosen for NSW and assessed as Australia’s most promising paceman, Lindwall lost five seasons of ‘prime time’ when first-class cricket was in recess. In the South Pacific and suffering horribly from tropical diseases, he marked out his run-up between the palm trees and got his bowling into a beautiful groove.

When big time cricket started again after the war, he was immediately chosen for NSW and later joined the Australian team to New Zealand in 1945/46 for his Test match debut. With the resumption of Anglo-Australian Tests in 1946/47, Lindwall was a mercurial figure and together with Keith Miller, they emerged as the undisputed leaders of Australia’s attack. Lindwall took 18 wickets at 20.38 in four Tests and scored 160 runs at 32.00. Highlights emphasising his promise and versatility were his three wickets in four balls in Adelaide and an extremely timely even 100 at Melbourne, actually beating Miller to a Test century, a rare feat for a number eight batsman. This century was the second fastest by an Australian. In Sydney two months later, Lindwall took 7 for 63 and, after scoring 7 for 38 against India in 1947/48, went to England in 1948 an established star.

On that tour, he rose to even greater fame as the leader of the attack in Australia’s 4-0 triumph. And though Bradman used him carefully, his very presence dictated the terms. Lindwall was injured during the first Test, but in three of the subsequent four he was devastating, reaching his peak at the Oval when he took 6 for 20 and 3 for 50 as England was bowled out for 52. On the entire 1948 tour he took 86 wickets.

On the 1948 English tour, Lindwall’s bowling in partnership with Keith Miller was one of the most important elements of Australia’s unbeaten record. He spearheaded the attack with consistent speed until around 1954, when in wicket keeper Don Tallon’s words: “Age and hard work were catching up on him and he wasn’t hitting the gloves so hard.”

Lindwall was a pioneer in the pre-game warm-ups which long since have become commonplace in competitive sport. Miller had a clear recollection of his bowling mate’s workout in the dressing room before confronting Graveney in the 1953 Test at Lords that morning. “He went at it, hammer and tongs, and for twice as long as usual,” said Miller. “Ray was fully primed when he walked out onto the ground and he disturbed Tom’s castle in the opening over.” When he yorked Len Hutton with the second ball of the Headingley Test of July 1953, it was received with the solemnity of a declaration of war.

Lindwall was aggressive and thoughtful, without overdoing the bouncer, and in his later years introduced an express delivery as the exception to what had once been the rule. It was just such a delivery that got through Trevor Bailey in the fifth Test of 1954/55 making Lindwall the first fast bowler in the history of Anglo-Australian Tests to capture 100 wickets.

Lindwall remained at this peak until at least 1954/55 when he took 20 Test wickets in the West Indies. Lindwall scored another Test century against the West Indies, one of five first class career hundreds, all from low in the order.

At the time, it was widely thought that Lindwall was finished in Test cricket, but he toured England again in 1956 and, as a veteran in 1958/59 against England, passed Grimmett’s 216 Test wickets to become Australia’s top wicket-taker until Richie Benaud assumed that mantle in 1962/63. His last Test series was in India in 1959/60 when he took 6 wickets at 37.

Jack Fingleton said Lindwall never liked bowling much, and always preferred batting, but he was opening Australia’s attack as late as January 1960, when he was 38, and played the last of his 61 Tests a few weeks later. Lindwall simply would not go away. He captained Australia once and, for several seasons, Queensland, having moved from NSW, before finishing with 228 Test wickets at 23.03 and 794 first-class wickets at 21.35.

In everything he did on the international stage from 1946 until 1960, when he retired at 38, the man’s marvellous athleticism shone through. Furiously fast with the ball, always brisk with the bat and exceptionally speedy in the field, he had the basic attributes of greatness and the competitive spirit to bring out the best in them.

In 1965 Ray was made a Member of the Order of the British Empire for his services to cricket.