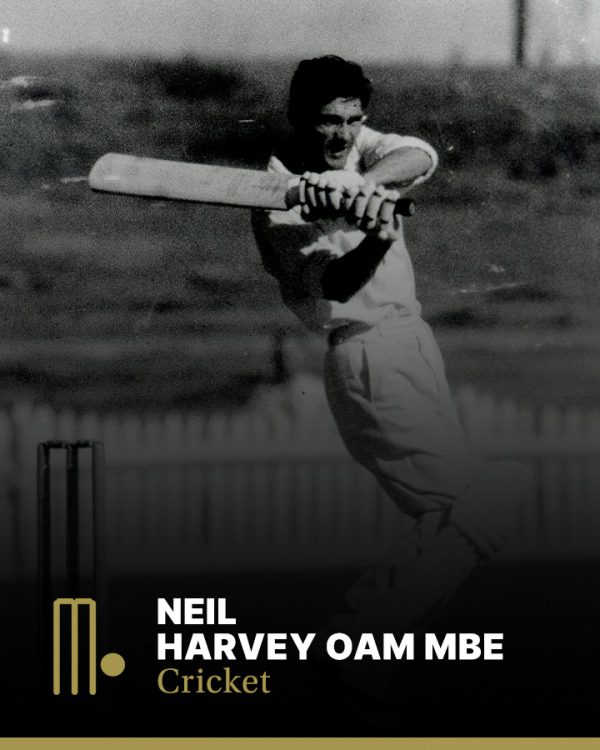 Neil Harvey OAM MBE was inducted into the Sport Australia Hall of Fame in 1985 as an Athlete Member for his contribution to the sport of cricket.

One of Australia’s all-time favourite cricketing sons, Neil Harvey was a gifted left-hand batsman, brilliantly athletic fielder, and occasional off spin bowler. On account of the richness of his talents, he served Victoria, New South Wales and Australia with great distinction during a first-class career that spanned 16 years between 1946/47 and 1962/63.

In short, Harvey was an electrifying batsman who thrilled spectators with the splendour of his stroke play. He possessed a masterful technique as well as a full range of shots and he displayed to cricket followers a superbly steadfast temperament right from the moment that he played his opening first-class innings. Harvey made his first-class debut in Sheffield Shield for Victoria at 18 in 1947 and went on to play 75 Sheffield Shield games for NSW and Victoria, scoring 5854 runs at 50.46.

Within two years of his first-class debut, Harvey was in the Australian national team, making his Test debut against India in Adelaide, January 23, 1948. In just his second Test match he scored a century, 153 (against India), making him the youngest Australian to score a Test century, beating out Archie Jackson. The opening period of his Australian career was particularly fruitful, scoring six centuries in his first 13 Test innings, a record made all the better considering he was only 20 and 21 years old at the time.

Harvey played 79 Tests from 1948 to 1963, and was the youngest member of Sir Donald Bradman’s famous 1948 Invincibles. He scored 67 centuries in his magnificent career, 21 of them in Tests. His Test average was 48.42 having made 6149 runs. He captained Australia in the second Test of the 1961 Ashes series in England, guiding Australia to a five-wicket victory as they went on to claim the series 2-1.

Bowlers rarely found a way of disrupting Harvey’s concentration or curbing his attacking instincts. He also possessed disarming power for a man of relatively short height. There will be many performances for which he will be remembered but foremost among them were his 112 in the celebrated Leeds Test of 1948 (his first century against England); his 151 in Durban in 1949/50; and his highest Test score of 205 against South Africa in Melbourne in 1952/53.

In later times, Harvey continued to play a role at the forefront of Australian cricket as a national selector for 12 years, and it was during the middle of this period (namely, the mid-1970s) that Australia fielded one of its most successful ever sides at international level.

In recognition of his string of outstanding achievements in the game, he was inducted into the Australian Cricket Hall of Fame in early 2000. He was also selected in the Australian Cricket Board’s official Test Team of the 20th Century and was made a Member of the Order of the British Empire (MBE) in 1963 for his services to cricket.