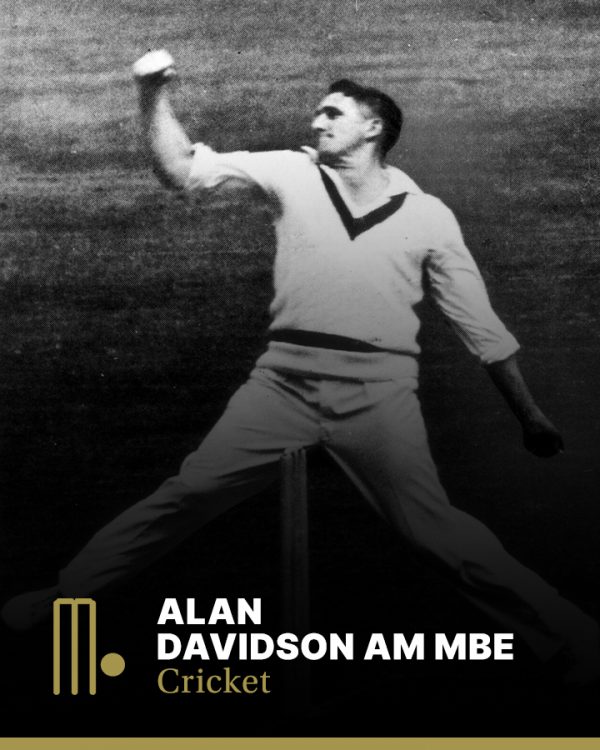 Alan Davidson AM MBE was inducted into the Sport Australia Hall of Fame in 1988 as an Athlete Member for his contribution to the sport of cricket.

An all-round cricketer whose greatest strength was as a left-arm fast-medium swing bowler, Davidson played 44 Tests for Australia in which he scored 1,328 runs at an average of 24.59. He claimed 186 wickets at 20.53 and was the first player to take 10 wickets and score 100 runs in a single Test, which he did with a broken finger in the famous tied Test against the West Indies at the Gabba during the 1960/61 series.

Born at Lisarow in the Gosford region of New South Wales, Davidson broke into Sheffield Shield cricket in 1949/50 and the following season was selected to tour New Zealand with the Australian Second XI. In the match against Wairarapa, he took all ten first innings wickets for 29 runs, and followed up with a score of 157 not out.

In 1953, Davidson was selected for the Australian side to tour England as a utility player in a team that included star bowlers such as Ray Lindwall, Keith Miller and Bill Johnston and made his Test debut on that tour, at Nottingham. After another tour to England in 1956, Davidson was a member of the Australian side that toured South Africa in 1957/58, where he topped the bowling averages and batted brilliantly. He took 25 wickets in five Tests on the tour, and was third in the batting averages with 54.20.

The following season, against England, Davidson took 24 wickets in five Tests at 19.00, including three wickets in one over in the second Test. He played in five more Test series until his retirement from the international scene after the 1962/63 series against England.

A hard-hitting spectacular batsman, Davidson scored 80 in the second innings of the historic tied test against the West Indies in 1960/61. After his record-breaking exploits in that Test, Davidson helped clinch the vital Fourth Test in England to take Australia to a 2-1 lead and the Ashes when he scored 77 not out in partnership with Graeme Mackenzie worth 98 for the last wicket.

Davidson toured England three times, India and Pakistan twice, and the West Indies and South Africa once. He maintained an active involvement with the game, as both a selector and an administrator. Among his many honours and achievements, Davidson has a rare honour in the cricketing pantheon, having scored 1000 runs and taken 100 wickets.