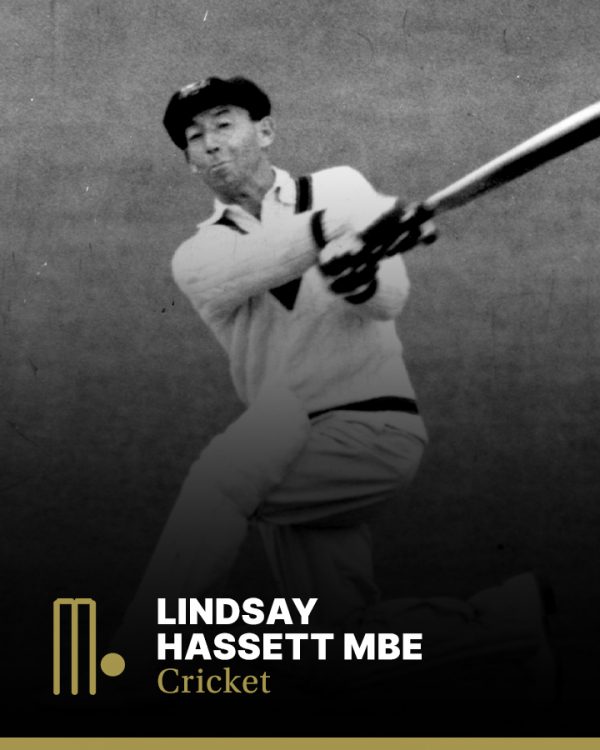 One of Australia’s most successful Test captains, he was reported to have friends wherever he went in the world. His sportsmanship, sense of fun, and generosity was acknowledged by all who knew him and he won hordes of admirers abroad, especially in England.

He made his Test debut on the tour of England in 1938 in the first Test of the series. He played his last Test in the fifth Test of the 1953 Ashes tour to England. He captained Australia on 24 occasions and had 14 wins, four losses, and six draws. Batting at first wicket down for most of his career, Hassett was equally adept as an opener and was a fine fieldsman. A tiny man (only 5ft 6in) who cast a shadow little longer than his bat, he played spin with quick feet, and speed with easy confidence.

Hassett was born in Geelong and was a brilliant sportsman at Geelong College. He was first noticed when he was 17, scoring 147 not out for the Combined Victoria Country XI against the West Indians in 1930/31. But it took him several more years to establish himself in Victoria’s first team. In the early 1930s he had seven ducks for South Melbourne. He then made 150 and broke into Shield cricket in 1932/33, playing one match that season and not regaining his place in the side until 1935/36.

Despite having scored only one century for Victoria when picked to make the 1938 tour to England, he scored 199 runs in four Tests at 24.87 and hit five centuries in other matches including one innings of 229 not out. He ended the tour behind only Don Bradman and Bill Brown on the averages with 53.16.

After the 1938 tour he established himself in Shield cricket, but like so many top players was robbed of cricket glory during the Second World War. He served in the army in the Middle East.

After the war he proved a highly popular captain of the Australian Services side for the Victory Tests that toured England, India and finally Australia. He declined a commission and did it all on a sergeant major’s pay of 12 shillings a day. The tour was hugely popular and re-established cricket’s role in public life.

After playing one Test on the short tour to New Zealand in 1945/46 he played in all five Tests against the visiting MCC side in 1946/47 to average 47.43, and led Victoria to the Sheffield Shield with a staggering personal average of 141.75.

He began the 1946/47 series against England by scoring 128 and shared a record third wicket stand of 276 with Bradman.

He returned home from the 1948 English tour with a Test average of 44.28 after scoring 137 in the first Test and notching seven centuries on the tour. His 137 played an important role in the victory at Nottingham that set the tone for the series.

In 1948 he became Bradman’s vice-captain. Hassett followed Bradman both as captain of Australia and as the embodiment of the national tradition of pocket-sized batting geniuses. Although considered by some to be a cautious captain, he was tactically astute and managed his playing resources well. He was highly successful against South Africa, West Indies and England and his batting remained absolutely staunch.

Hassett toured South Africa in 1949/50 as Australian captain, scoring two Test centuries and averaging 67, leading Australia to a 4-0 victory. He continued as captain in the series against England in 1950/51, the West Indies in 1951/52 and South Africa in 1952/53. He retired after the 1953 tour of England in which Australia lost the Ashes 0-1 with four drawn Tests, but his team won many friends.

In 216 matches he hit 16,890 runs at an average of 58.24. He scored 59 centuries in his 290 innings, 27 of them overseas. He was the fifth Australia to score more than 3000 runs in Test matches. His highest career score was 232 for Victoria against the MCC in Melbourne in 1950/51. On retirement, he had compiled more Test runs and centuries than any other Australian apart from Bradman.

After cricket, he ran a sports goods business and within a few years he established himself as an expert commentator on ABC radio, Alan McGilvray rating him as the best with whom he worked. Hassett also wrote a newspaper column for The Age, which became a ‘must read’ for cricket devotees. In both the spoken word and print he demonstrated his deep knowledge and understanding of the game, both technical and tactical.

He reportedly gave up broadcasting and writing in the 1970s because if his disapproval of what he saw as a lowering of behavioral and ethical standards on the field.