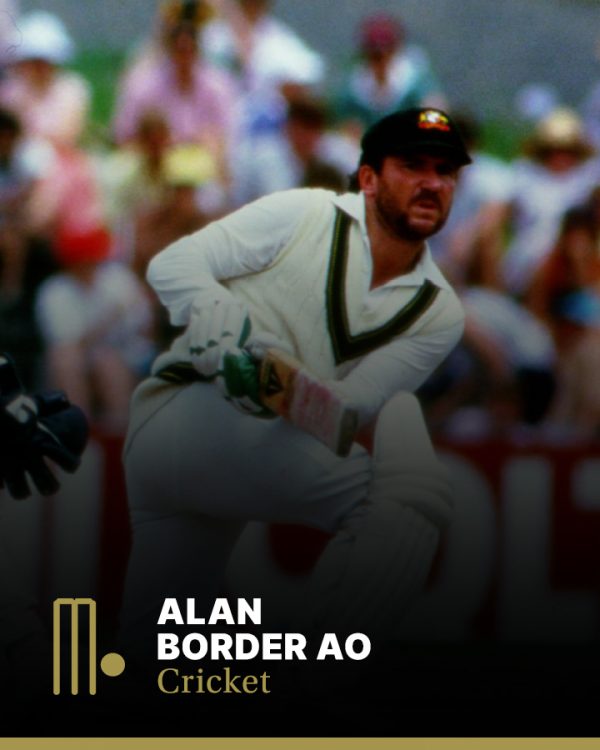 Allan Border made his Test debut in the 1978/79 series against England. In 1987, he became Australia’s highest run scorer in Test cricket, making 7343 runs in 94 Tests. He went on to become the world’s top Test scorer (11,174 runs) and most capped Test player (156 games). A more than capable spinner, and a dogged fielder with a lethal throwing arm, Border was the heart and soul of the Australian cricket side for more than a decade.

Named Wisden Cricketer of the Year in 1982, Border assumed the national captaincy in 1984, following Kim Hughes’ distraught resignation. These were dark days, when Australia’s cricketing fortunes were in a slump, and the way ahead was uncertain. However, Border’s hard-edged leadership and determined partnership with coach Bob Simpson during the perilous 1980s helped create a golden era extending to the current day. Affectionately known as ‘Captain Grumpy’ by many, he was also ‘AB’ -and the saviour of Australian cricket – to a generation of spectators and commentators.

Under this leadership, Australia emerged triumphant on two fronts. The first occasion was in 1987, when Australia overcame England by seven runs in Calcutta to win the World Cup. The second great achievement, however, eclipsed the World Cup win tenfold when, in 1989, Border led a revitalised team against England to win the Ashes. The Australian combination could do no wrong, and Border was the inspiration behind much of the side’s success. It was a time for all who followed Australian cricket to treasure.

Border retired in 1994, at the end of a tour of South Africa. However, his on-ground achievements did not stop there, as he went on to play in Queensland’s first ever Sheffield Shield victory in 1994/95.

Named twelfth man in Australia’s Team of the Century in 2000, Border also coached the Australia ‘A’ side, diversifying his involvement in the game. From 1998, Border was a national selector, only retiring from the panel at the beginning of 2005. He took on a media role for a short time, then rejoined the national selection panel in a temporary guidance role to new Chairman, Andrew Hilditch.

Border was voted Australian of the Year in 1990 and made an Officer of the Order of Australia (AO) in 1994. In the ultimate recognition of his meaning to the game and Australian sport in general, the award presented to the best Australian cricketer every year is known as the Allan Border Medal.