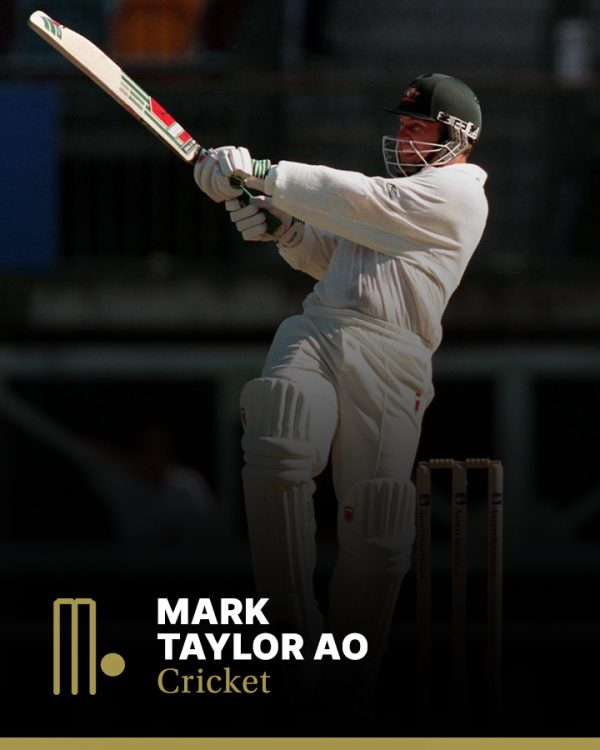 Mark Taylor AO was inducted into the Sport Australia Hall of Fame in 2002 as an Athlete Member for his contribution to the sport of cricket.

Affectionately known as ‘Tubby’, Taylor was one of Australia’s most successful Test players and captains and an excellent leader of Australian cricket both on and off the field. He was widely regarded as an instrumental component in Australia’s rise to Test cricket dominance, and his captaincy was regarded as adventurous and highly effective. Taylor won plaudits for his always cheerful and positive demeanour.

Taylor was Australia’s 39th Test captain after inheriting the captaincy from Allan Border in 1994/95. Leading Australia in 50 Tests (second only to Border with 93), his record boasts 26 wins, 11 draws and 13 losses. At the time of his retirement, he was Australia’s fourth highest run-scorer, amassing 7525 Test runs (ave 43.49), including 19 centuries and 40 half centuries, from 104 matches. He is one of only six Australians to have played more than 100 Tests.

Taylor’s outstanding batting prowess was matched by his superb fielding skills. He carved a reputation as one of the finest slip fielders in world cricket. During his career, he took 157 Test catches, at the time a Test record (now held by Mark Waugh).

A heavily built left-hander who played classically late, Taylor made 839 Test runs on his first England tour in 1989 helping Australia to a 4-0 Ashes win.

Taylor was regarded as one of Australia’s finest captains. His tactical nous and dependency guided Australia to consistent victories over a number of years. He led the side to it’s first victory over the West Indies in the Caribbean in 1995, a victory that saw Australia earn the status as the world’s unofficial Test champions.

In 1998/99, he recorded one of the all-time great innings when he scored an unbeaten 334 runs against Pakistan in Peshawar to equal the highest individual Test score by an Australian player, previously set by Sir Donald Bradman in 1930.

He retired from Test cricket on February 2, 1999. Having originally trained as a surveyor, Taylor has maintained his involvement in cricket as a respected commentator with the Nine Network.

Taylor was named Wisden Cricketer of the Year in 1990 and was named Australian of the Year in 1999. He was made an Officer of the Order of Australia (AO) in 2003 for service to cricket as a player, administrator and mentor, and to the community, particularly through support for organisations involved in fundraising for cancer research.

Mark Taylor’s record equalling 334 not out in the second Test against Pakistan in October 1998 enabled him to share the mantle as Australia’s highest run scorer in Test cricket with the world’s greatest ever batsman, Sir Donald Bradman, who scored his 334 against England at Leeds in 1930.

That Taylor decided to declare Australia’s innings closed with his score unconquered on 334, forfeiting the chance to edge his way past Sir Donald, earned him widespread commendation from the cricket world. During his triple century performance, he passed Sir Donald Bradman and Greg Chappell on Australia’s all time run scoring list.