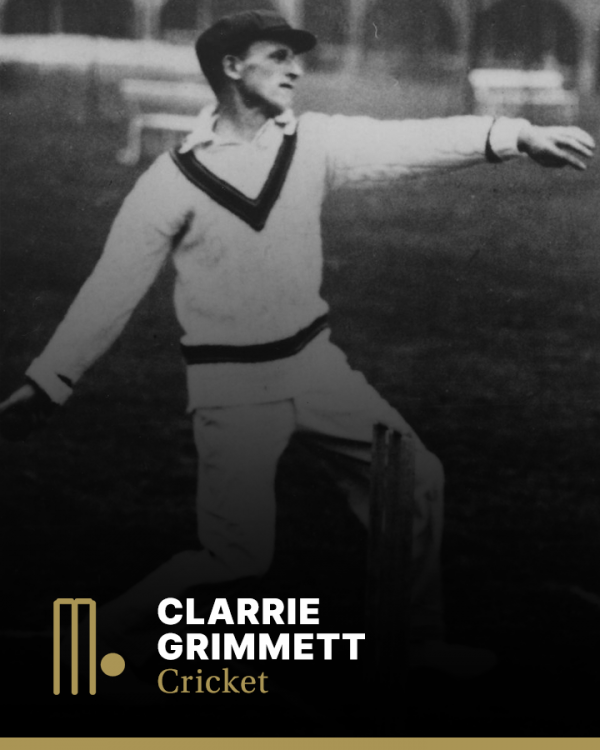 Clarrie Grimmett remains one of the most remarkable men ever to play cricket for Australia as one of the great spin bowlers of the 1920s and 30s.

He was born in Dunedin on the South Island of New Zealand, he practiced tirelessly at the Basin Reserve and first attracted attention at 15 when he took 6 for 5 and 8 for 1 for Wellington Schools in a representative match; he was playing Plunket Shield at seventeen.

Bowling to a marked area in his backyard, with a fox terrier to fetch the ball, he made himself as accurate as a machine, and he mastered the variations of spin bowling, never believing that he knew it all. After the standard legbreak, topspinner and googly there came the flipper – which took several years to perfect, and which, when batsmen tried to discern by the snap of his fingers, he smoke screened by snapping the fingers of his left hand as he released a legbreak.

As a promising player for Wellington East and Wellington Province he considered several offers to play in Lancashire, England.

Grimmett, a signwriter by trade, crossed the Tasman in 1914 as a 23 year old, on a short working holiday that lasted for 66 years.

Three years in Sydney district cricket were sufficient to show him that Arthur Mailey, another great spinner, had literally been given the green light towards the New South Wales team and all fields beyond. This, and marriage to a Victorian girl, took Grimmett to Melbourne, where he played with the South Melbourne club. During his six years in Melbourne he was given only three invitations to play for Victoria. He had limited opportunities, mainly because selectors were apprehensive about risking his spin. His third match for Victoria was against South Australia where he collected eight wickets for 81. He moved to South Australia at the end of the 1923/24 season and first played for South Australia in 1924/25.

His first trip to England was in 1926 and, after a slow start, he managed to adapt his Australian hard wicket style to the slower conditions with quite dramatic results, taking 13 wickets in three Tests for an average of 31.84.

As it was, he averaged exactly six wickets per Test, with a striking rate of a wicket every 67 balls and an average cost of a mere 2.16 runs per six-ball over.

In Australia against England in 1928/29, he took 23 wickets in the five Tests, and returned to England in 1930 a superb bowler, relishing the soft pitches. Against Yorkshire he took all 10 wickets for 37 runs off 22.3 overs.

His 29 wickets in England in the 1930 series was a record, and it is accepted that his bowling was at least as important to Australia as was Bradman’s phenomenal batting (he took 144 wickets at 16.85 on the tour). In each of the next two home series – against West Indies and South Africa – he gathered 33 wickets. Highly effective in England again in 1934, he took 25 more.

He crowned his career with his 200th Test wicket in a sensational match in 1935/36 against South Africa, the first bowler to do so, but at 43 he was considered by some to be too old for further service. He played in all five Tests and took 44 wickets at 14.59. He himself had always been conscious of his age; he and his cricket cap were almost inseparable in case his baldness be taken too seriously.

He was upset about missing selection for the 1936/37 series in Australia against England and the 1938 series in England. He never forgave selectors for dropping him (at the age of 47) when he considered himself at his peak. The premature breaking-up of the destructive spin partnership of Grimmett and O’Reilly almost certainly weakened Australia in the few seasons remaining before the war. But still there was Sheffield Shield cricket, and in 1939/40 Clarrie showed them with 73 first-class wickets, lifting his Shield total to a record 513. He was still playing with success at 48.

In first-class matches between 1911 and 1941, Grimmett took five wickets in an innings 127 times, 10 wickets in a match 33 times, and held 139 catches. Grimmett, a completely unorthodox spin bowler and a fair, but always courageous batsman, bagged 1424 wickets in his long career and took 216 Test wickets (against England, South Africa, and the West Indies) for an average of 24.21. He was only once in his life called for a no-ball.