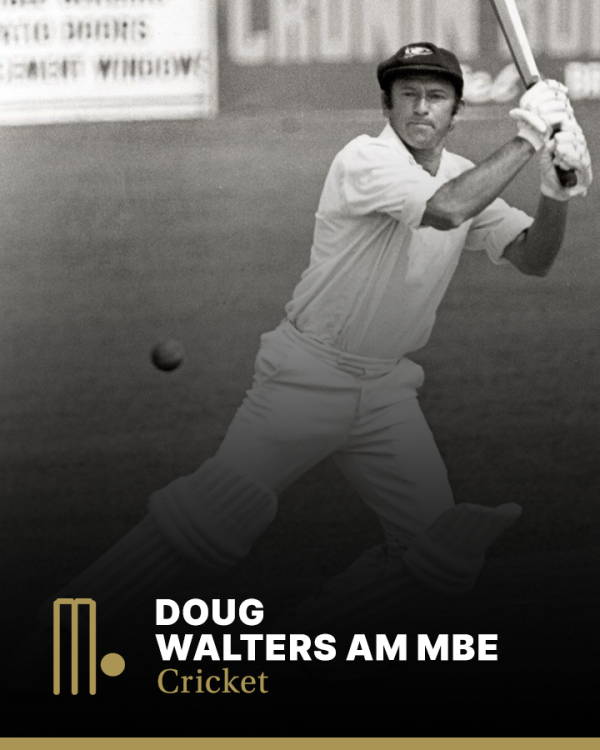 Doug Walters AM MBE was inducted into the Sport Australia Hall of Fame in 1994 as an Athlete Member for his contribution to the sport of cricket.

Walters holds a somewhat mythical place in Australian cricket. Small, cheeky, popular and multi-skilled, he would drink all night without getting drunk then wipe sleep from his eyes to make a shot-laden century or take a crucial wicket or stunning catch. At his best Walters was a magnificent, if occasionally careless, batsman and a reliable fast medium swing bowler, once recording 5-66 in the 1973 series against the West Indies.

Growing up in country New South Wales, he chalked up such outrageous figures as 9 for 8, 9 for 4, and 8 for 7 for the Police Boys Club.

What finally fired his ambition to play for Australia was sight of the 19-year-old Graeme Pollock blasting a century for South Africa at Sydney in 1963/64, although Walters himself was already ascending the cricket ladder. In the previous season he was flown down to Sydney as a late replacement in the NSW Colts XI against Queensland. He came in at No. 7, a slight figure, incongruous large blue cap propped up by his ears, and scored 140 not out. One ball was pulled into the lake outside the Sydney No. 2 ground.

Walters stepped from the paddock into first-class cricket just eight days after his 17th birthday, where he played for NSW and faced the great Wes Hall, reaching 50 in the second innings (believing to this day that Wes Hall, for Queensland, refrained from bowling him a bouncer), and 60 in the next match. In first-class games he amassed 16,180 runs at an average of 43.84 including 45 centuries, with a personal best score of 253 for NSW against South Australia in 1964/65. In the same match he added 378 runs with Lyn Marks for a new Sheffield Shield second-wicket record and the second-highest of all partnerships in the 82-year history of the Shield. Walters made 253 – and went on to take 7 for 63. When it came to bowling, he took 190 wickets in first-class games for an average of 35.69.

Two years later, just before his 20th birthday, he made a century (155) on Test debut in Brisbane against Mike Smith’s England side. A second Ashes hundred came in the next match in Melbourne as he followed 155 with 22 and 115 (averaging 68) in a sparkling start that was upturned in 1966 by conscription for two years’ national service. He was not called up for duty in Vietnam, and smoothly swapped training greens to whites. Two years later in 1968, as 2783873 Private Walters, K. D., he averaged 127 in two Tests against the touring Indians. He scored his 1000th Test run in only his 11th Test, on the 1968 tour of England.

Later that year Walters was absolutely brilliant, scoring four centuries against the touring West Indians for a total of 699 runs (including a 242 and 103) and averaging 116.50, at Sydney. This was his second highest Test series average (in 1967/68 he averaged a remarkable 127 from two Tests against the touring Indians). He became the first player to make a double-hundred and a hundred in a Test.

Walters always seemed to save his best batting efforts against sides other than England. On four long tours he failed to score a century at Test level. This remains his career’s biggest hole. Using a high back-lift and a light bat, he was susceptible to the swinging ball. On his first tour of England he could average only 38.11. On his last tour in 1977 Walters slumped badly, posting a highest Test score of 88 and averaging only 24.77 from nine innings in the five Tests.

English wickets invariably puzzled Walters, but on the faster Australian wickets he was capable of defying the most brilliant bowlers – apart from the times when his concentration seemed to lapse after prolonged attacks on his off stump.

Quick on to the back foot against the spinners, he was a fine straight-driver and hooker, and a valuable partnership breaker with his medium pace. Crowds relaxed and related to his instinctive and aggressive Test batting that three times brought up centuries in a session, the most famous arriving when he smacked the last ball of the day from Bob Willis for six at the WACA in 1974/75.

He could play pressure innings as well, he averaged 71 against West Indies in 1972/73, his 112 at Port of Spain taking only 148 minutes and attracting all the superlatives. Lance Gibbs had three short-legs by 35 minutes on day one and Walters scored 100 between lunch and tea. “By any standards it was a magnificent innings,” Wisden reported. This followed 102 not out in the previous Test and 55 and 108, both not out, against Trinidad.

In his first season of World Series Cricket he failed to make the Australian ‘firsts’ and spent most of the season touring Australia with the rest of the reserves from Kerry Packer’s professional troupe. He scored only 302 runs for an average of 15.89. At the end of the second World Series Cricket season in 1978/79, Walters reached the end of his remarkable career in senior cricket. But though Walters reign at the top was over, he left behind some vivid memories. Walters retired after being overlooked for the 1981 Ashes tour.

As a man of the people he was rewarded with a stand on the old SCG hill. “There will never be another like him,” Dennis Lillee said. “I never saw him throw a bat, never heard him talk badly of anyone. He was so cool. He could bat, too.”