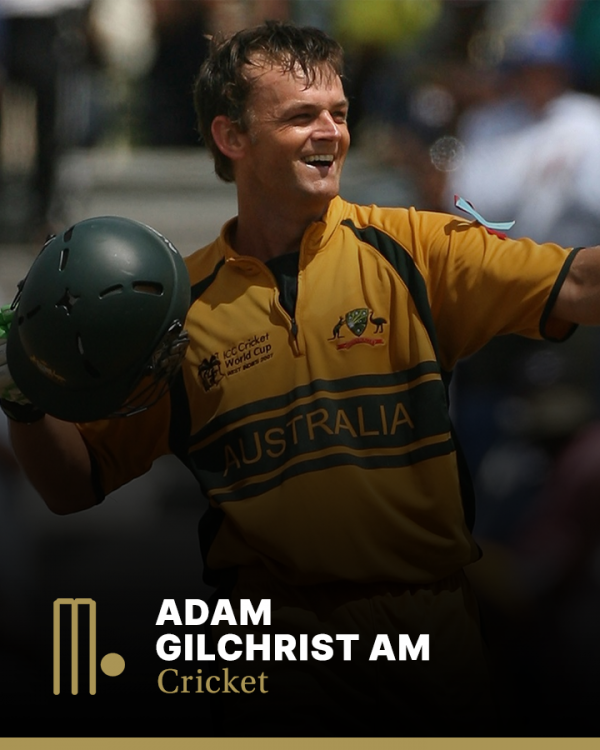 Adam Gilchrist AM was inducted into the Sport Australia Hall of Fame in 2012 as an Athlete Member for his contribution to the sport of cricket.

Pure statistics dictate that Adam Gilchrist is one of the greatest wicketkeeper/batsmen in cricket history. In 96 Tests the left-hander compiled 5,570 runs at 47.60, claimed 379 catches and, with whip-quick reflexes, executed 37 stumpings; those dismissals remain an Australian wicket-keeping record. As an attacking top-order batsman, who possessed obvious ‘keeping skill, Gilchrist revolutionised the role of wicket keepers in Test and One Day cricket. His 9,619 ODI runs at 35.89 is enviable, however, it’s his 417 catches and 55 stumpings in 287 ODI matches that saw him set a world record, surpassed only by Sri Lanka’s Kumar Sangakkara in 2015.

Gilchrist’s strike rate remains amongst the games’ highest in both Test and ODI cricket and his 57-ball century against England at the WACA in Perth in 2006 is the fourth-fastest in Test cricket history. In 2002 he set the world record for the fastest test double-hundred (212 balls) against South Africa at the famous Bull Ring, in Johannesburg, South Africa. He wasn’t just prolific, but he excited crowds, teammates, and opposition alike and was the first player to hit 100 sixes in Test cricket. His 17 Test and 16 ODI centuries are both second all time (again to Sangakkara) and he holds the unique record of scoring at least 50 runs in successive World Cup finals (1999, 2003 and 2007). His blistering 149 off 104 balls against Sri Lanka in the 2007 World Cup final has been rated the greatest World Cup innings of all time and he remains one of only three players to have won three World Cups, joining fellow Sport Australia Hall of Fame Members Glenn McGrath and Ricky Ponting as members of Australia’s triumphant 1999, 2003 and 2007 teams.

Throughout his career, Gilchrist was a renowned ‘walker’ and would often turn on his heels when he thought he was out, sometimes contrary to the umpires’ decision and, because of this, was always seen as one Australia’s great sportsmen, both in ability and with his attitude towards athletic integrity. He was Australia’s regular Vice Captain in both forms of the game and captained the Test and ODI teams, in the absence of regular skippers, Ponting and Steve Waugh, on several occasions.

As a talented junior cricketer from country NSW, Gilchrist was selected for the NSW U17 team, before heading over to England in 1991 as part of the Australian National Youth Team where he played in Youth Tests and ODI’s and scored a century and a fifty in three Youth Tests. Upon his return to Australia, he was accepted into the Australian Cricket Academy and, over the next 12-months, represented the Academy in matches against State Second XI teams and toured South Africa where the team played provincial youth teams. Then during the 1992/93 season, he was gained selection into the NSW First XI team as a batsman (Phil Emery was the incumbent ‘Keeper) and, despite averaging 30.40 in his debut season, found regular games hard to come by.

With no guarantee of selection, Gilchrist opted to move to Western Australia in time for the 1994/95 season. A move that saw his career blossom both with the bat and ‘keeping gloves. The locals were hesitant to embrace the ‘new kid on the block’, however, he won them over with near-perfect form behind the stumps – he claimed 55 First Class dismissals, the most by any domestic ‘keeper and plundered his maiden First Class century (126) in the latter stages of the season against South Australia. Across the next few seasons Gilchrist put together a case that Australian selectors would find hard to ignore and in 1996 he was named as Australia’s 129th ODI player, when called upon to replace the injured Ian Healy against South Africa. At the start of the 1997/98 season, a selection policy change allowed the Selectors to pick separate Test and ODI teams, and Gilchrist replaced Healy as Australia’s first choice ODI ‘keeper. In his second innings as an opening batsman, in the second Tri-Series final against South Africa, played at the Sydney Cricket Ground, Gilchrist struck his maiden ODI century and secured his position in the Australian team.

In 1999, Gilchrist made his Test debut in the First Test against Pakistan at the Gabba and in doing so became Australia’s 381st Test cricketer. He again replaced Healy, who was dropped after a string of poor performances, and his selection coincided with a dramatic rise in the Australian team’s fortunes. To this point, they had won just three of eight Tests in 1999. In his second Test, Gilchrist made an unbeaten 149 to help guide Australia to victory in Hobart, in a match that looked to be well beyond their reach. Gilchrist and WA teammate Justin Langer combined for a record-breaking 238 partnership to seal a famous win for the Aussies. In 2000, after cementing his place in the team, he was named Australia’s Vice Captain, a position he held until his international retirement in 2008. In all, he captained the Test team in the absence of regular skippers on six occasions (4 wins, 1 loss, 1 draw) and the ODI team on 17 occasions (12 wins, 4 losses, 1 no result).

Gilchrist was named as one of five Wisden Cricketers of the Year in 2002 and won the Alan Border Medal in 2003. Both awards were due recognition of his dominance in both forms of the game throughout that period. In true testament to his ability, legacy, and impact on cricket around the world, he was named in Richie Benaud’s All-Time Greatest Team in 2004 – the only current player at the time to be named.