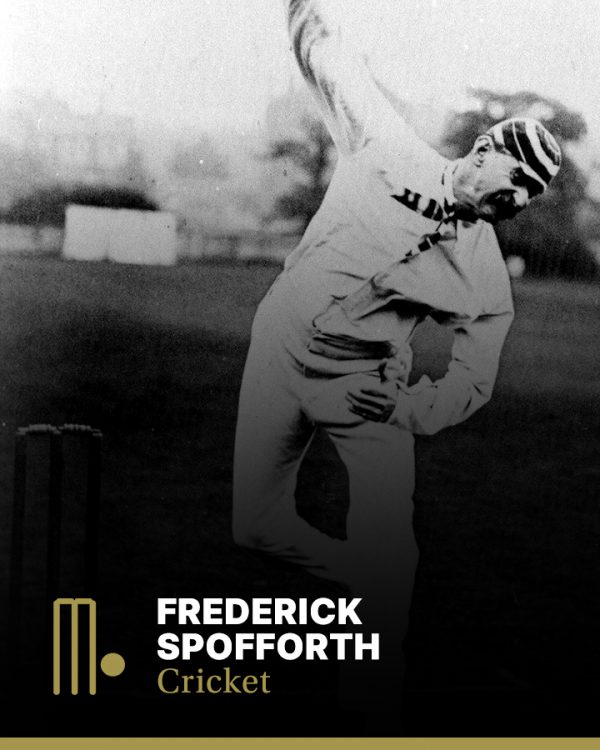 Tall, spindly, and a player who consistently tested the wits of opposing batsmen, Fred ‘The Demon’ Spofforth was Australia’s first true fast bowler. His first-class career spanned 23 years between 1874 and 1897 and, throughout that time, his accuracy, his lionhearted endeavour and the phenomenal rapidity of his wicket taking made him a revered figure. Although he possessed a relatively unremarkable run-up and action, his 6ft 2in frame enabled him to leap into his delivery stride, thus bringing the ball down from a great height.

Spofforth was an inspiration both for his peers and succeeding generations of pacemen. From the time of his debut for New South Wales, he was a larger than life character in the sport – the quality of his performances matched in kind by his ability to enhance the growing popularity of cricket in Australia. He was the first true international fast bowler to strike terror in the batsmen’s hearts.

Notwithstanding the relative superiority of bowlers over batsmen during his era, Spofforth’s raw figures were outstanding; he claimed 94 Test wickets in 18 matches at an average of 18.41 and 853 first-class wickets at 14.95. He was also the first bowler to clinch a Test hat-trick. During the January Test match of the 1879 Lord Harris’ England tour of Australia, played on the Sydney Cricket Ground, Spofforth gave a brilliant bowling performance of 13 wickets for 110 runs. He claimed ten wickets in a match in four of those 18 occasions, and his 14 for 90 against England at The Oval in 1882 stands as one of the best performances in a match by an Australian bowler in the entire history of Test cricket.

Spofforth’s stamina also set him apart from other players of his era. He reputedly spent considerable time at his brother-in-law’s rural property before embarking on at least two of his five tours of England specifically in order to improve upon his fitness, and it was also common for him throughout his career to bowl considerably more overs than his teammates. He was one of the first Test cricketers to exhibit the trait of refusing to take a backward step in his approach to the game, either on or off the field. He refused, for instance, to play in Australia’s first ever Test team because NSW wicketkeeper Billy Murdoch was overlooked at the selection table, and it was only when Murdoch was chosen for the following match that Spofforth made his own debut at international level.

The spark igniting the fire in a ten year old Spofforth was the 1863/64 visit to Australia of Parr’s XI which included the fast bowler George Tarrant. Spofforth marveled at Tarrant’s speed and was determined to copy him. The triple objective for Spofforth was pace, pace and more pace.

Spofforth made full use of the bowling crease to provide contrasting lines of attack, and he bowled from medium-pace, through fast medium to a surprise express delivery. His repertoire included an effective yorker, a top-spinner and a speedy break-back from the off and he became a master of subtle changes of pace, swerve, spin and line of attack.

He played his first Test match in 1877 in Melbourne in the second match against England, taking 4 wickets. However England went on to win the match by 4 wickets.

A highpoint of his career was the year of 1878, when the demon bowler, then 23, captured a phenomenal 764 wickets at 6.08 each! In February 1879, Spofforth played for NSW against Lord Harris’ tourists in a game that, on the Saturday, descended into the Sydney Riot of 1879.

Spofforth was instrumental in creating history in the 1882 Australian tour of England. The match that started the legendary Ashes series began at The Oval on August 28. In its second innings, England needed a mere 85 runs to clinch the match. But Fred Spofforth refused to give up and led his team to a remarkable and one of the closest victories in the history of Test cricket. Australia won by seven runs with Spofforth taking a total of 14 wickets.

After that match Spofforth was dubbed the “Demon bowler” by the British media and became the most feared bowler among the English batsmen. Spofforth paved the way for future fast bowlers by mastering the ‘eyeball to eyeball’ stare at the batsman – cold, almost malevolent. His swarthy complexion, black moustache and steely brown eyes combined to convey the unmistakable aura of hostility.

Fred Spofforth played his last Test match in Sydney in January 1887 in which he bowled 12 overs, conceded 17 runs and took one wicket. England won the match by 13 runs.

After retiring from Australian cricket he migrated to England, married his fiancé whose father owned the Star Tea company, became managing director of the firm and after playing occasional cricket until aged 50, died a wealthy man in 1926, aged 73.

In 1996 he was posthumously included in the Australian Cricket Hall of Fame as one of the ten inaugural inductees along with John Blackham, Victor Trumper, Clarrie Grimmett, Bill Ponsford, Don Bradman, Bill O’Reilly, Keith Miller, Ray Lindwall and Dennis Lillee.