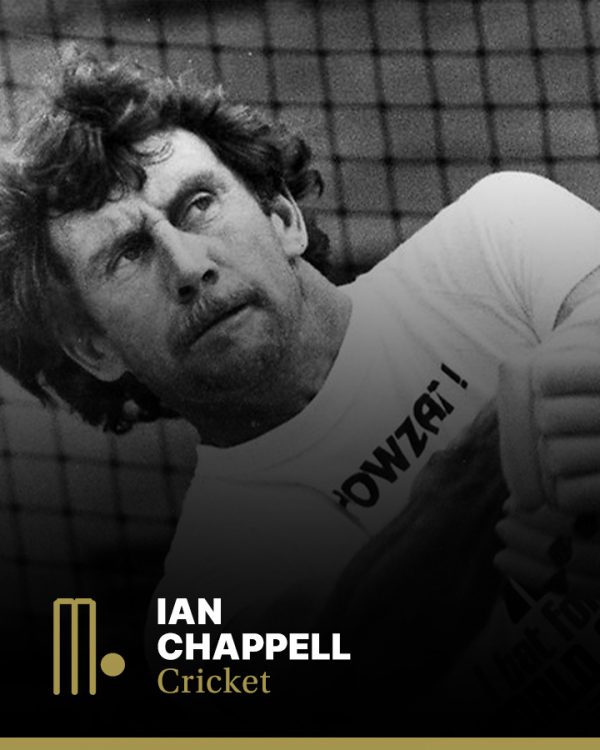 Ian Chappell was inducted into the Sport Australia Hall of Fame in 1986 as an Athlete Member for his contribution to the sport of cricket.

The name of Ian Chappell is always one of the first mentioned whenever Australia’s greatest Test captains are discussed. He possessed all the qualities for successful leadership – tactical awareness, personal example, player respect and the courage of his convictions.

Chappell debuted for South Australia in first-class cricket as an 18-year old, against Tasmania in Adelaide in February 1962, after having been 12th man against New South Wales earlier. The next season he provided an early example of his temperament and ability by hitting 149 against a Test-class New South Wales attack comprising Alan Davidson, Richie Benaud, Frank Misson, Johnny Martin and Bob Simpson. The additional promise of his leg-spin bowling suggested all-round possibilities. Two years of Sheffield Shield play, augmented by a season with Lancashire League club Ramsbottom in 1963, broadened his experience.

He was the first of the three Chappell brothers to play Test cricket. The oldest son of a remarkable cricketing family he learned to play on a backyard pitch laid down by their father Martin, a prominent Adelaide grade cricketer and baseballer who married the daughter of the great Vic Richardson, regarded as South Australia’s greatest all-round sportsman, who played 19 Tests for Australia between the wars and captained the successful 1935/36 side to South Africa.

Chappell made his Test debut in December 1964, in the one-off match against Pakistan at the MCG but failed to make an impression and missed selection for the subsequent Australian tour to the West Indies. He took some time to establish himself in the Test arena but, although he failed to record a half-century in his first nine Tests, the national selectors stood by him. Their faith was rewarded when he not only exceeded 50 for the first time, against India at the MCG in 1967/68, but extended that innings to 151. Thereafter his place was seldom in doubt and 71 of his eventual 75 Test appearances were played consecutively.

He was an aggressive, ruthless, but fair, captain who inspired tremendous loyalty among his men, and was rated by Dennis Lillee as the best captain he played under. As captain he won the Ashes back in 1974/75, retained it in 1975, and won a series in the West Indies in 1973. He was also a key member of the team which inflicted a 5-1 drubbing on the men from the Carribean in 1975/76 at home.

Due to disaffection with cricket officialdom, Chappell retired from Test cricket in 1976 but later joined the breakaway World Series Cricket (WSC), which began in 1977 and lasted for two Australian seasons. Along with most of the world’s leading players, he signed with the private promoter, on the principle of fairer financial rewards for international cricketers. Chappell captained the Australian team in the series, which attracted 66 international players.

When he resigned the Australian Test captaincy, Chappell had played in 72 Test matches, scoring 5187 runs (including 14 centuries and scores of 196 against Pakistan in 1972 and 192 against England in 1975).

After the WSC organisation and the Australian Board of Control settled their differences in mid-1979, Chappell played three more Tests (for a total of 75) under the captaincy of his brother Greg.

He finished his Test career with 5345 runs at an average of 42.42. He led Australia in the 1974/75 series which saw Australia regain the Ashes, and also led South Australia to two Sheffield Shield victories. Between 1961 and 1980 he scored 59 first class centuries, 14 of them in Tests. He held 105 Test catches and took 20 wickets with his leg-spin bowling.

Chappell challenged authority on many occasions and was much maligned for it. His team was occasionally branded as an example of the ‘ugly Australian’ because of conduct and dress, but it was a time when social conventions were being questioned as never before. Chappell also campaigned for the improvement of player payments and conditions. As a result he was often in conflict with officialdom, but his players loved and respected him. At times abrasive, he was always straightforward and honest.

Chappell was Wisden Cricketer of the Year in 1976 and was inducted into the Australian Cricket Hall of Fame in 2003.

Chappell remained in public view as a perceptive television commentator whose views and opinions were delivered with the same honesty and directness that characterised his playing days.