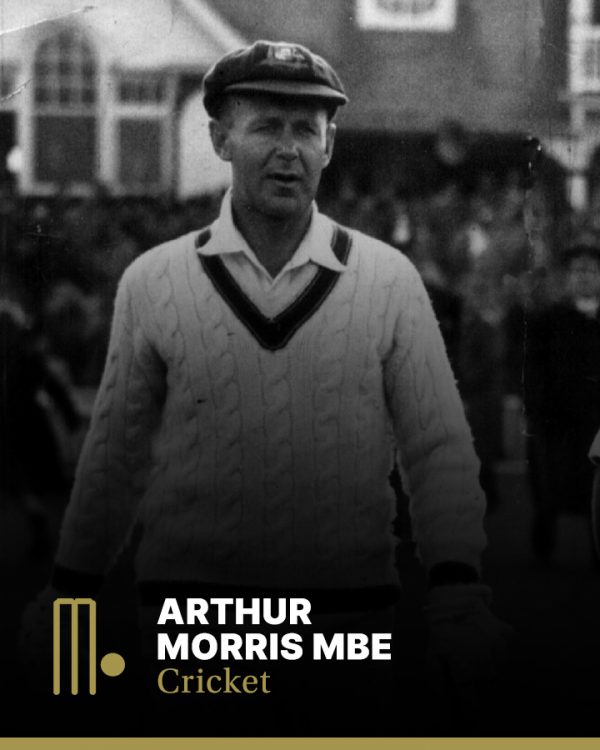 Inducted into The Sport Australia Hall of Fame in 1992 for his contribution to the sport of Cricket, Arthur Morris is regarded as one of the greatest left-handed batsmen in Australian cricket history.

The acme of elegance and the epitome of sportsmanship, cricket was never a matter of life or death for Arthur Morris. Born in Sydney, where his father taught him the rudiments of the game and moulded his love for it. Though Morris started with St George’s as a bowler and continued to bat last, observant critics noticed his growing skill with the bat and more opportunities arose until, after hitting a century against Sydney University when 16, he was promoted to open the innings. Then came an uncommon distinction for a schoolboy when Morris was asked to play for New South Wales Second XI against Victoria Second XI.

Before reaching his 19th birthday, Morris set the cricket world talking when he scored a century in each innings, 148 and 111, in his first interstate match for NSW against Queensland in 1940, the first player from any country to do so. During the six war years which followed, Morris hardly played any cricket and he spent much time in the Australian Army Movement Control in New Guinea. Not until the 1946/47 season when the MCC team arrived from England could he take part in serious cricket again.

His selection for the Tests followed as a matter of course. He made only two and five in the first two matches, but the continued faith of the selectors was not misplaced, for in the third Test, in Melbourne, he hit 21 and 155 and in the next Test 122 and 124 not out in Adelaide. That season Morris played in all five Tests and finished with a total of 503 runs, average 71.85.

The following season, 1947/48, Morris played in the first four Tests against India, scoring one century and averaging 52.25. He missed the fifth because the selectors wished to see the form of other probable choices for the English tour. Appointed captain of NSW he hit another century against India and was a certainty for England. After adjusting to the English conditions, Morris hit 184 against Sussex and scored five more centuries before the end of the season, including the highest innings of his career, 290 against Gloucestershire.

During the 1948 Tests Morris was the most consistent batsman on either side with 696 runs in nine innings with an average of 87.00. No other batsman scored three centuries in the series and Morris finished the summer with an aggregate of 1922, average 71.18 in first-class games; and this despite being troubled by a split between the first and second fingers of his left hand caused by constant jarring from the bat as he played the ball. Usually after Morris had been batting a few overs the wound opened again and bled; towards the end of the season he underwent a minor operation that kept him out of a few games.

Of medium height and compact build he was an elegant left-hander, at his most brilliant when facing spin, when he would sometimes move yards to break up a length. A certain fallibility against the swinging ball around the leg stump caused some loss of confidence and Alec Bedser exploited the weakness, dismissing him 18 times in Tests.

In 1950/51 Alec Bedser dismissed him four times for scores of 25 or less. The fourth dismissal occurred on Morris’s 29th birthday and that evening Bedser presented him with a book entitled ‘Better Cricket’ by Lindsay Hassett and Ian Johnson, saying, “I hope this will help you”. Morris promptly made his highest Test score, 206 in the fourth Test in Adelaide.

He held his place in the side until his retirement in 1955 and his last major Test innings was 153 in the first Test against England in Brisbane in 1954/55 when he added 202 for the third wicket with Neil Harvey.

He led Australia when the regular captain was unable to play through injury, once against West Indies in 1951/52 and once against England in 1954/55.

One of the few left-handers who have gained any measure of success as opening batsman, Morris was at once imposing to opponents and impressive to spectators by his air of complete composure at the wicket. Besides his batting, Morris shone as a fieldsman and was reliable in catching, but was not often called upon to bowl.

From 1966 until 1988 he was a Trustee of the Sydney Cricket Ground and Sports Ground Trust. He was deputy chairman from 1978 to 1986. In 1974 Morris became a Member of the Order of the British Empire for his services to cricket.

Inspiration: “If you do take it up – do it for the enjoyment”