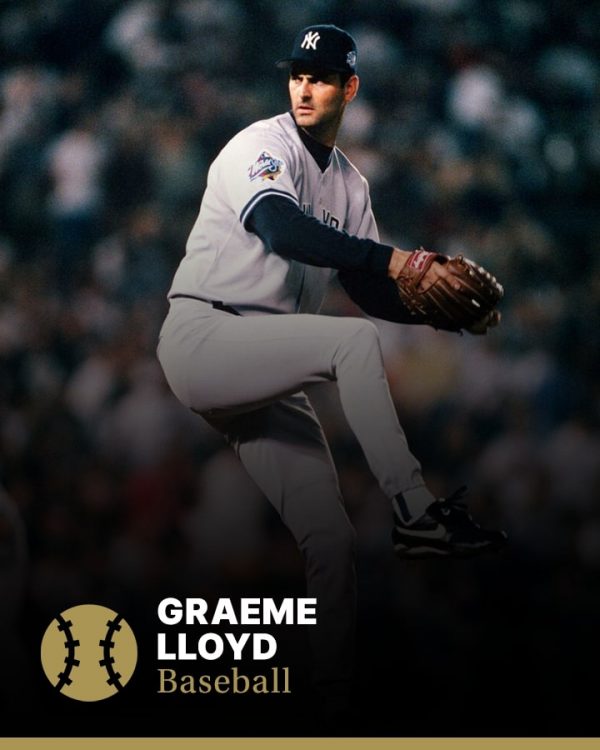 Graeme Lloyd was inducted into the Sport Australia Hall of Fame in 2003 as an Athlete Member for his contribution to the sport of baseball.

Lloyd’s place in baseball history was sealed in 1996 when pitched 5.2 scoreless innings to ensure the famed New York Yankees victory in The World Series — and become the first Australian to wear a coveted World Series ring. The big left hander was with the Yankees again in ’98 when they repeated the victory.

In 2004 he was a member of the Australian baseball team that won silver at the Athens Olympics.

But his place in the Sport Australia Hall of Fame rests on far broader foundations: After representing Australia at junior and senior level he joined the Milwaukee Brewers in1993 then, despite battling painful injuries, spent a decade playing Major League with a number of clubs, including with three seasons with the famed New York Yankees.

Since returning to Australia he has been an unstinting and successful coach. That may yet prove an even greater legacy.

He picked up a baseball for the first time at the age of 10 and despite playing AFL and cricket as a schoolboy, soon gravitated to baseball, first with All Stars in the Geelong region, then with Essendon, and later with both Geelong and Sunshine. At 19 he was chosen to represent Victoria in the Claxton Shield and the same year represented Australia in the World Cup in Japan. The following year he was spotted by visiting scouts from the Toronto Blue Jays and invited to Canada for Spring training.

His early years with American minor league clubs were solid but unspectacular, and though hampered by a series of injuries (and still playing Australian baseball in the off season, including with 1991 ABL title winners Perth Heat) he worked his way up through the grades. In December 1992, was drafted by Philadelphia Phillies -but traded immediately to the Milwaukee Brewers. He made his Major League debut with the Brewers on April 11, 1993 at Oakland coliseum, becoming the first Australian pitcher to play Major League. Four days later he was joined by Dave Nilsson as catcher to create an all Australian battery.

The next few seasons brought mixed results and further injuries but in August 1996 the New York Yankees took him in a trade deal. Still troubled by injury, his early games with the Yankees were inauspicious, but the club persevered and in the World Series they reaped their reward.

In Game Three, he got two important outs in the eighth inning. After replacing set-up man Mariano Rivera, he retired lefties Ryan Klesko and Fred McGriff. In Game Four, with the game tied and runners on first and second in the ninth inning, he got McGriff to hit into a double play. The Yankees then scored two in the tenth, and Graeme Lloyd got his World Series ring. He received another when the Yankees won again in 1998.

In 1999 he was traded to Toronto Blue Jays, but the same year attained free agency and signed a deal (reportedly worth $9 million over three years) with Montreal Expo.
After some visa and contract issues he chose to return to Australia to be part of the 2004 Olympic team which won silver.

Graeme Lloyd’s international triumphs should not overshadow his contribution to Australian baseball, where he competed whenever possible. His Lifetime eared run average of 2.34 remains a record. He was 1991 ABL Player of the year and was pitching coach for Western Australia in their 2008 Claxton Shield victory.

In 2005 Graeme Lloyd was inducted into the inaugural Australian Baseball Hall of Fame. He was also a member of the All Star Australian Claxton Shield side when it was selected in 2009. He has been a role model and trailblazer, but also a tireless coach and mentor. His influence on Australian baseball will be enduring.