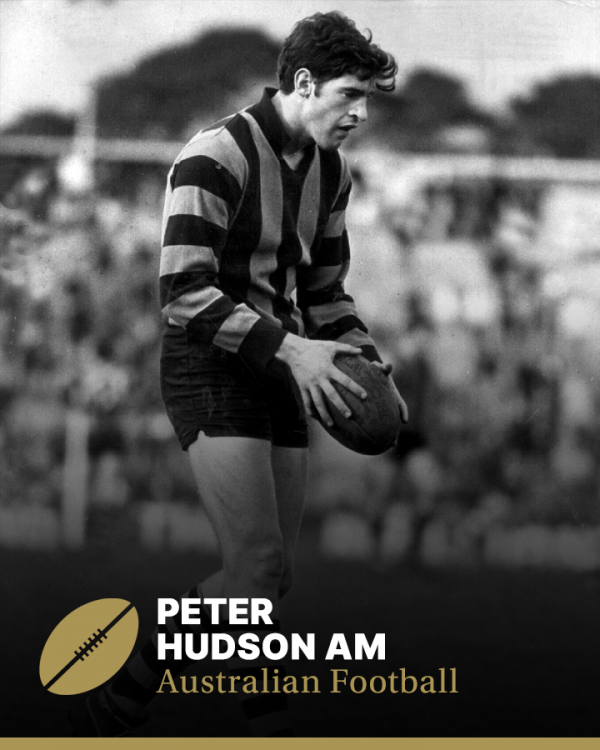 Peter Hudson’s impact on Australian football is perhaps summed up by this well known story. The question on the board outside a church not far from Glenferrie oval had been aimed at provoking some kind of contemplation. “What would you do if Jesus Christ came to Hawthorn today?” Underneath it some graffiti wit had scrawled, “Move Peter Hudson to centre half forward.”

Arguably the greatest full forward of all time – his amazing career average of 5.64 goals per game is the best in league history and his 150 goal season in 1971 matched Bob Pratt‘s record for most goals in a season.

Peter’s sturdy frame, brilliant judgment, sure hands and deadly accurate kicking style (generally using flat punts) made him the complete full forward’s package that was near impossible to counter.

He attracted the attention of every VFL scout with 469 goals in four seasons in Tasmania and was the centre of huge media attention when he made his debut against Carlton’s rugged Wes Lofts in the second round of 1967. Despite being battered all day he kicked a creditable four out of Hawthorn’s six goals and was on his way to a stunning career.

He scored 125 goals in 1968, 120 in 1969, 146 in 1970 and equalled Bob Pratt’s season record of 150 in 1971. His dramatic attempt to break Bob Pratt’s all-time season goal kicking record of 150 in the dying stages of the 1971 grand final remains one of football’s most unforgettable moments. He was concussed just before half-time and battled through the second half in a daze, equalling the record but not breaking it.

In a sensational start to the 1972 season at Glenferrie Oval, Peter kicked eight goals in the opening two quarters, before tearing a cruciate ligament in his right knee in an awkward collision with his Melbourne opponent. Over the next five years the saga of his possible return chewed up page after page of newspaper copy.

Perhaps his most memorable performance was late in 1973 when a desperate Hawthorn brought him back for a vital game against Collingwood at VFL Park. He made a movie star arrival when he was flown in by helicopter and despite being unable to dash for the ball or rise more than a foot off the ground, he kicked eight goals beating four opponents in the process!

1975 saw Peter return to Tasmania as coach of Glenorchy where he led them to their first premiership in ten years. Peter moulded the team into a well disciplined unit and their football, particularly over the finals series, was of the highest order.

He returned to Hawthorn in 1977 and confounded all the critics by scoring 110 goals to top the VFL goal kicking for the fourth time. No one before him equalled his ability to read the game. Every top full-back of his era conceded a big tally against Hudson at some stage and the powerful Hawthorn side of 1971 based its whole attacking plan on the brilliant former Tasmanian.

Hawthorn’s strategy of leaving a third of the ground open for him to be left one-out against the full-back worked brilliantly, and Peter kicked bag after bag of goals, including an amazing 16.1 against Melbourne in 1969 -his best ever effort in a single VFL game (he once kicked 18.2 in a Tasmanian senior game).

In 1978 he returned to Glenorchy and created a record by kicking 142 goals in roster games and completed the season with 191 goals, winning the William Leitch medal (the highest honour in Tasmanian football). The following season he again topped the goal kicking with an amazing 200 goals, winning his second William Leitch medal. He announced his retirement at the end of the season.

Peter Hudson was kept goal less in only three of his 129 VFL games and just five during his entire senior grade career. In total, he kicked 2191 goals in Tasmania and Victoria and is recognised as an all time great.

He was inducted into the AFL Hall of Fame in 1996 and was elevated to Legend status in 1998.