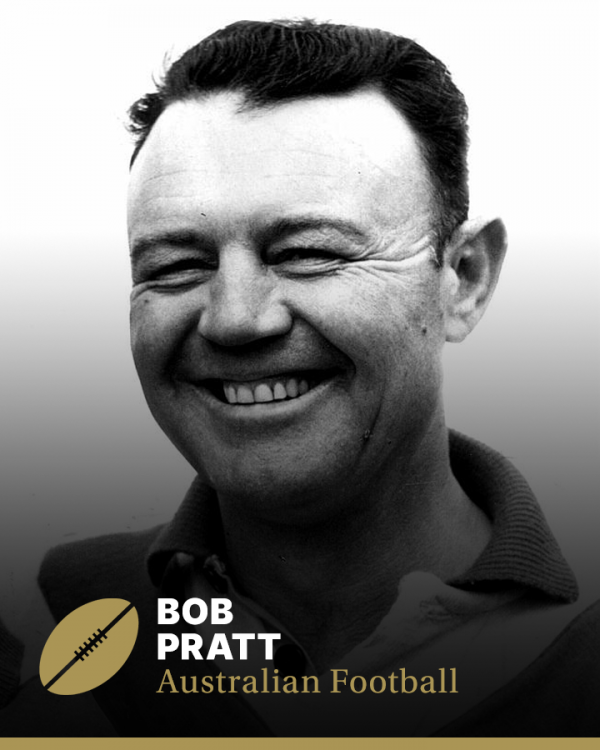 Possibly the most brilliant high flyer the VFL competition produced, Bob Pratt kicked 681 goals for South Melbourne in only 158 matches from 1930 until 1939, and in 1934, kicked a record 150 goals. He returned to South for just one match in 1946. Known for spectacular diving marks, he represented Coburg in the VFA from 1940 to 1945. In that time he continued his incredible goal scoring record, booting 183 goals during 1941, including 22 in a single game against Sandringham.

Pratt was recruited from Mitcham to join South Melbourne in 1930. Starting slowly with 66 goals in his first two seasons, the high flying Pratt first made his mark in the 1933 season when he booted 109 goals and won the VFL goal kicking award.

He set the record for the most goals in a season in 1934 when he booted 150 from just 21 games. The record stood for 37 years before Hawthorn’s Peter Hudson equalled it in 1971, playing three more games than Pratt. Had he stayed at South rather than playing VFA for six years he would have kicked well over 1000 goals. In 1935 he kicked 103 goals

At the time of his death he was the last living member of the Swans 1933 grand final team and was inducted into the AFL Hall of Fame in 1996 as one of 16 inaugural Legends.