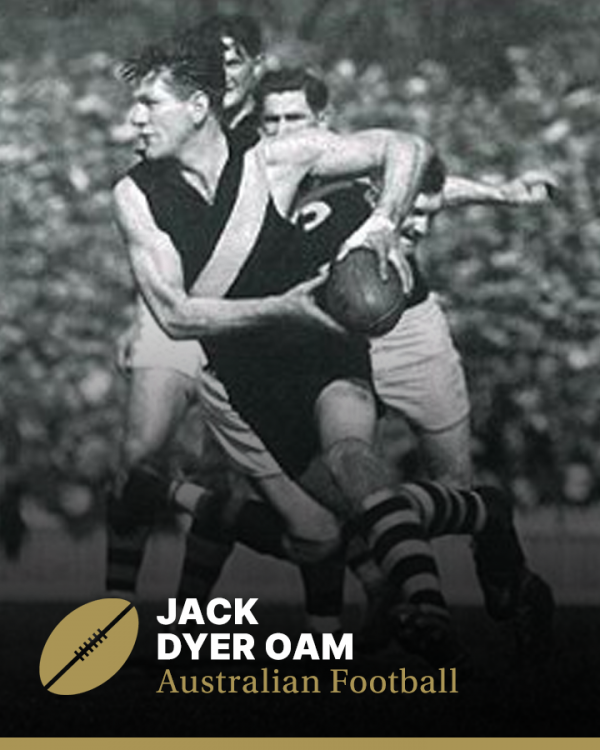 Jack Dyer was one of the finest ever ruckmen to play the game of Australian Rules -and one of the toughest. Popularly known as ‘Captain Blood’ for his fearless, aggressive style, he played a then record 312 games for the Richmond Football Club between 1931 and 1949, and kicked a total of 443 goals.

Even today, Dyer’s games total for the Tigers still stands as second highest for the club, surpassed only by another legend of the yellow and black – Kevin Bartlett – with 403 games. Dyer also led the club’s goal kicking in 1947 and 1948, and was a regular Victorian representative, as well as captaining the state in 1941 and 1949.

Dyer’s contribution to the spirit of the side was undeniable, recognised through his winning the greatest ever number of Best and Fairest awards at Richmond. His tally was six, won in 1932, 1937, 1938, 1939, 1940 and 1946. The first of these was won when he was aged just 18, and missed playing half the season with injury. It was a sure sign of emerging greatness.

Dyer played in Richmond’s premiership winning team in 1934. He was named captain of the side in 1940, then served as captain-coach from 1941 to 1949, and continued coaching from 1950 to the end of the 1952 season following his retirement as a player. In his role as captain-coach, he led the Tigers to another flag in 1943.

After farewelling Punt Road – the stronghold of the Tigers – Dyer maintained his involvement with the sport as a commentator on television, radio and in the press, and gained great public affection with his unique and sometimes convoluted style of presentation.

A Life Member of the Australian Football League, his services to the sport were recognised in the 1990 Queen’s Birthday Honours, when he was awarded the Medal of the Order of Australia (OAM). Further recognition followed in 1996, when he was named in the AFL Team of the Century, and both inducted and elevated to Legend status in the AFL Hall of Fame. He was also fittingly named as captain of Richmond’s Team of the Century, and the ‘Captain Blood’ legend flourishes to the current day.