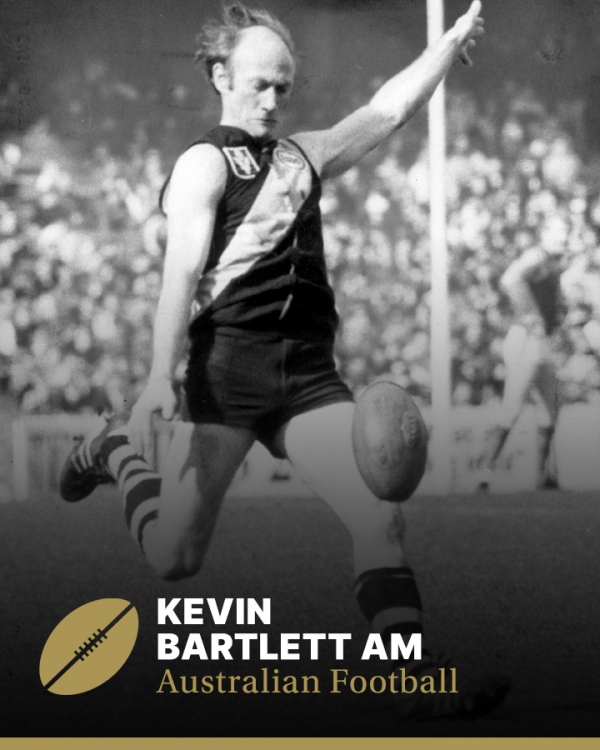 Kevin Bartlett AM was inducted into the Sport Australia Hall of Fame in 2006 as an Athlete Member for his contribution to the sport of Australian football.

Bartlett  played 403 games and kicked 778 goals in a golden career that spanned from 1965 until 1983. Bartlett played 150 or more consecutive matches on two separate occasions (173 matches from 1975 to 1982, and 150 matches from 1966 to 1972). No other player in league history has achieved this and only Michael Tuck of Hawthorn and Brent Harvey of North Melbourne have played more games.

As a boy, Bartlett barracked for Footscray but lived not far from Richmond’s Punt Road Oval and was tied residentially to the Tigers. He walked into the club and asked for a trial. The rest is football history.

Bartlett was a natural rover, a great reader of the play and uncanny in his ability to steer clear of trouble. He had tremendous courage and relied on pace and skill to avoid crushing tackles. Many opponents tried to ‘retire’ him from the game, but Bartlett very rarely was ‘nailed’.

A prolific possession winner, Bartlett was particularly dangerous near goal. This earned him the nickname ‘Hungry’ and it was claimed he would rather have a shot for goal from 50m than pass to a teammate.

Bartlett was a Victorian representative throughout most of his VFL career (20 appearances, 32 goals) and captained the team in 1980. He played in the 1967, 1969, 1973, 1974 and 1980 Richmond premiership sides and was always one of the best players on ground. He kicked seven goals in the 1980 grand final win over Collingwood. This effort won him the Norm Smith medal as best on ground.

After his retirement from the ground, Bartlett coached Richmond from 1988 to 1991 (88 games, 27 wins, 61 losses). He also featured in the media as a commentator and had a morning sports program on SEN 1116, called ‘Hungry for Sport’, as well as programs on Fox Sports.