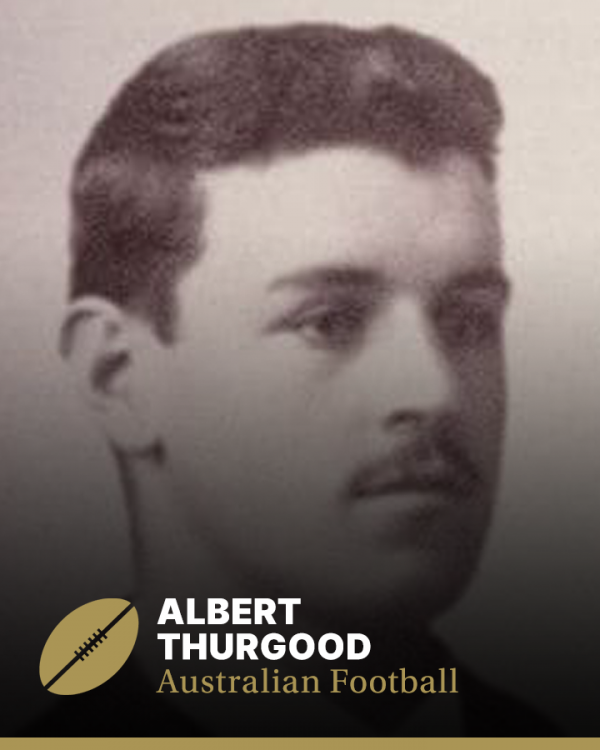 Albert ‘The Great’ Thurgood was no mere footballer but a champion of his era with few rivals to match his feats. After finishing school he joined Essendon (1892-94, 1899-1902, 1906) in the Victorian Football Association during its run of four successive premierships from 1891 to 1894, of which he played in three (1892 – 1894). At six feet tall (182 cm) and twelve stone (76.2 kg), Thurgood possessed qualities that made him a versatile key position player: extraordinarily fast, a superb mark, nimble and agile, and his greatest asset a brilliant kick. Usually playing at centre-half forward, he could regularly punt-kick over 80yds (73.1m) and drop-kick over 90yds (82.3m) while one place-kick at the East Melbourne ground on 22 June 1899 was measured at over 107yds (98.48m) to rival that of Dave ‘Long Dave’ McNamara as the longest kick of all time.

During an era of low scoring games, he became the first player to kick more than 50 goals (1892) and in one game against the hapless Richmond in 1893 scored 12 of the team’s 14 goals, then followed up with nine out of ten goals the next week, a remarkable feat. Between 1895 and 1898, he left Essendon to seek work in Western Australia and played for Fremantle. On his return in 1898 he continued where he left off with Essendon in the newly formed Victorian Football League heading the goal kicking list in 1900 with 25.

While contemporaries noted that Thurgood was slower, heavier and less keen, he produced his finest performance in 1901 when he is credited with winning the premiership for Essendon. In the semi-final he kicked five of the sides six goals from centre half forward to win the game. His game was described as one of the finest ever in a league final. Then, in the grand final against arch-rival Collingwood he kicked half of his team’s six goals. That same year, he was voted Champion of the Colony for the third time, previously winning it in 1893 and 1894.

A dispute with the club the following year saw Thurgood retire but returned to play eight ineffective games in 1906 when the team was short and he retired permanently after injuring his ankle. He only played eight seasons with Essendon and in that time he headed the goal kicking list in every full season he played. Overall, he played 209 games and kicked a mammoth 714 goals at a time when goals were hard to find.

He then became active in horse racing notably with ‘Amazonia’ who won the Bagot Handicap in 1921 and came third in the 1921 Melbourne Cup, and ‘Chal’, winner of the 1919 Cantala Stakes.

In May 1927, Thurgood was tragically killed in a car accident in Melbourne. ‘The Argus’ writing on his death recalled one match against Melbourne at the MCG when Essendon was three or four goals behind with as many minutes to go: “Sent to the ruck, he literally carried all before him. He ran half the length of the ground whenever it suited him, marked everywhere and anywhere, kicked goals from all positions, and won the match.” The writer went on with lavish praise on the man with the lordly appearance of a military general: “There have been many great players, but none more deserving the title of champion than Albert Thurgood. If the defence required strengthening then it became Thurgood’s job. If a desperate effort in the ruck was necessary, Thurgood’s weight and power were thrown into the breach. In fact, there was no position on the field in which he did no excel. As a footballer he was a superman”.