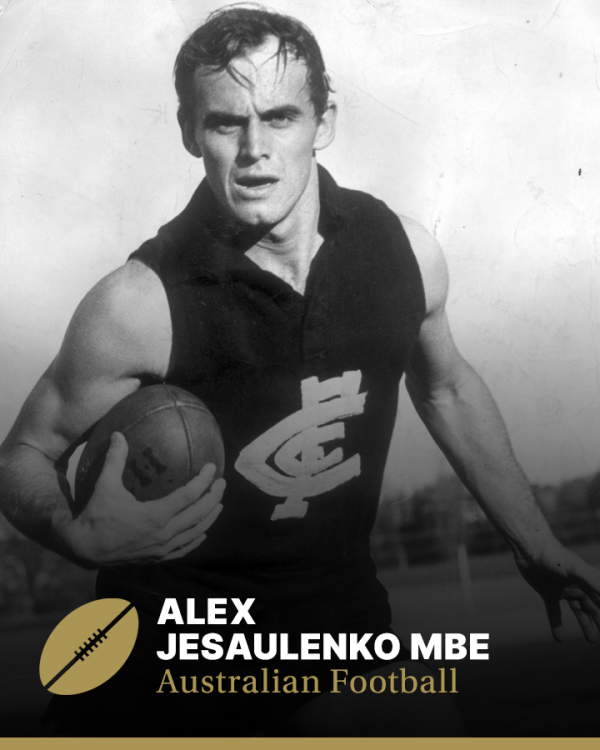 Born in Austria of Ukrainian parents, Alex Jesaulenko came to Australia with his family in 1949 and as a schoolboy initially played soccer and rugby before taking up Australian Rules, at the age of 14, with Eastlake in Canberra.

Athleticism was a feature of his game and a spectacular mark in the 1970 Grand Final against Collingwood has been immortalised both on film and by the spontaneous cry of commentator Mike Williamson — “Jesaulenko, you beauty!”

Alex Jesaulenko’s contribution to Australian Rules football was, however, far more extensive. He coached Carlton in 1978 and 79, leading them to a Premiership in 1979 and returned to the club as coach again in 1989 and 90.

After a disagreement with Carlton officials at the end of 1979 Jesaulenko left the club and joined St Kilda in 1980. Initially signed as a player, he took over as coach after just two games. He continued as playing coach for the 1980 and 81 seasons, then after retiring as player, continued as non-playing coach for the 1982 season. In all he played 23 games with the Saints and kicked 20 goals.

In 1989 he took over the coaching role at Carlton mid-season and coached them until the end of the 1990 season.

He was an inaugural inductee into the Australian Football Hall of Fame when it was opened in 1996 and was elevated to legend status in 2008.