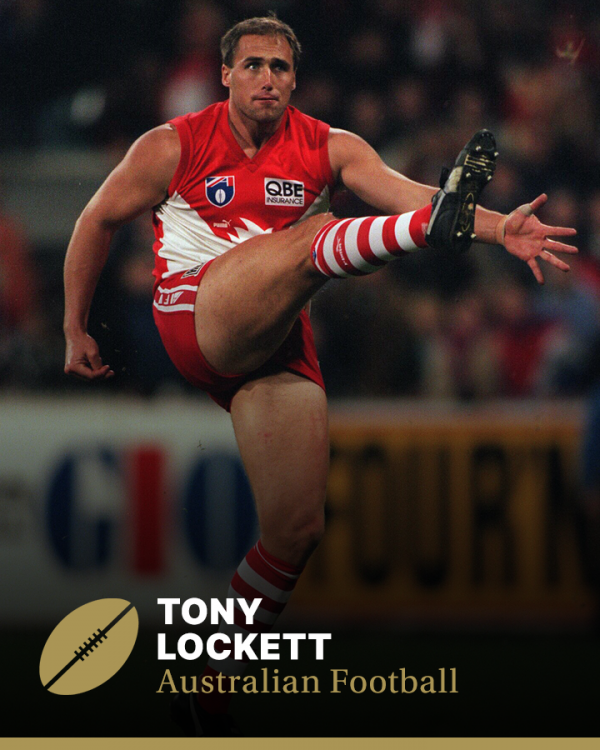 Tony Lockett was Inducted into The Sport Australia Hall of Fame in 2017 as an Athlete Member for the sport of Australian Rules Football.

Lockett, affectionately known as Plugger, retired in 2002 as the greatest ever goal kicker in the history of the AFL/VFL with 1,360 goals. In a career that spanned 18 seasons across both the St Kilda Football Club (1983-1994) and the Sydney Swans (1995-1999, 2002), he became the first ever full-forward to win the Brownlow Medal, sharing the honour with John Platten in 1987. The 281 game veteran retired with four Coleman Medals (87, 91, 96, 98) as the League’s leading goal scorer, three best and fairest awards and five All-Australian selections.

Lockett began playing Australian Rules with the Under 12s team of his father’s club, the North Ballarat Roosters in 1974. He played a total of 120 junior games and after just five senior games for the Roosters was recruited to St Kilda Football Club as a 16-year-old, making his VFL debut for the Saints the following year wearing the number 37 against Geelong.

In Round 10 of that season he kicked his first of 144 bags of five or more goals in a win against Richmond. During the 1987 season the statistics ballooned with his first ten-goal effort in a match, in a year that finished with him winning the Brownlow Medal, kicking 117 goals in a team that finished tenth.

His fierce attack on the ball, and quite often – the man, quickly became a part of his game that made him even more formidable to defenders around the league.

Lockett’s performance in 1991 was truly astounding and will likely never be matched as he kicked 127 goals in just 17 games, averaging 7.47 goals per match, well and truly the highest average by any player per game in one season. His exploits helped the Saints make the finals for the first time in 18 years.

In 1995, he moved to the Sydney Swans and kicked 110 goals in 19 games, lifting the Swans from last the previous season to twelfth with eight wins. Lockett kicked 16 goals straight against Fitzroy in Round 10 that season.

Lockett and the Swans played in their first Grand Final in 1996 losing to North Melbourne after he kicked a famous point after the siren to win the preliminary final. Three years later he would kick his 1300th goal in Round 10 1999, against Collingwood surpassing the long-standing league record set by Magpies legend Gordon Coventry in 1937.

He retired at the end of the 1999 season after the Swans lost to Essendon in the qualifying final, before making a short comeback in 2002 as a 36-year-old wearing the number 46 and kicking his 1360th and last goal in Round 12 against Geelong.

In 2006 Lockett became a Member of the Australian Football Hall of Fame and in 2015 was Elevated to become an AFL Hall of Fame Legend.