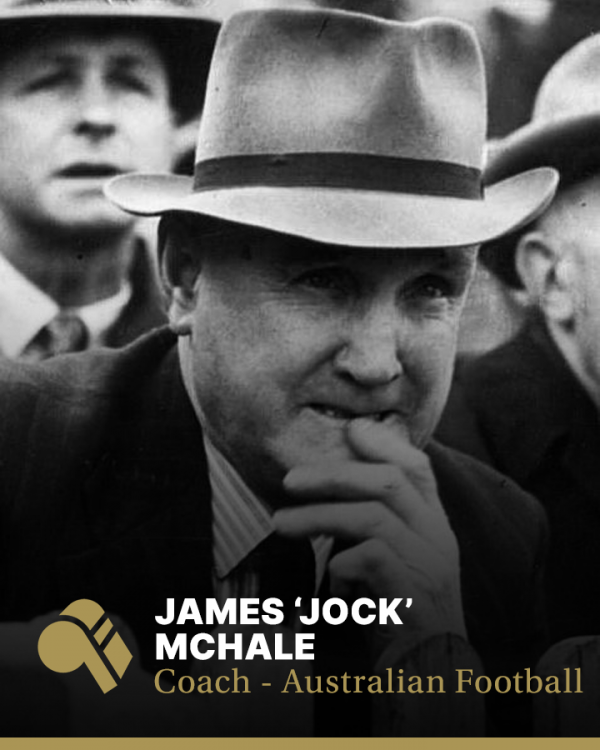 After joining Collingwood in 1903 (as a player) and contributing to the Magpie success and spirit for almost half a century, the McHale name has come to be regarded as synonymous with the club whose culture and tradition he not only enriched but to a very large degree helped formulate. In Jock McHale, the Collingwood Football Club has an eternal figurehead who, through his own passion, inspired and engendered loyalty beyond question.

However, he is best remembered for his achievements as a coach. In 1912 and 1913 McHale acted as captain/coach of Collingwood, then from 1914 to 1917 as playing coach and from 1918 to 1949 as non-playing coach. McHale did not concentrate on individual skills coaching -he left that to his assistants, but he inspired the team with his speeches. A tough disciplinarian, he believed in players keeping their places and sticking to a game plan.

A key part of the McHale way was the Thursday night training session that involved full scale match practice which he would umpire. It was a skill game. He had his eyes on particular players and he would watch everything. Here he put to good use his uncanny ability to assess footballers and the game. He did not like the star system and insisted on being paid the same wage as his players.

The ‘Jock McHale Medal’ is an award given to the coach of the winning premiership team in the AFL and has been awarded since 1950. McHale was inducted into the AFL Hall of Fame in 1996 and was elevated to Legend status in 2005.