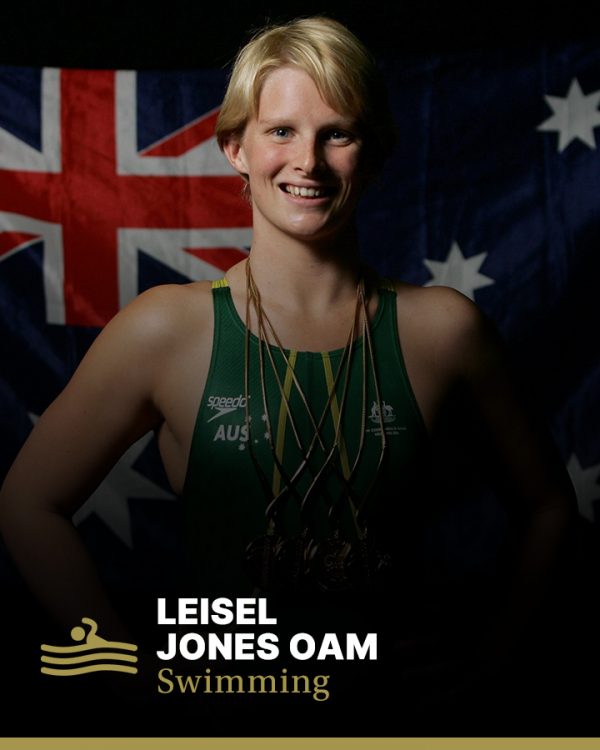 Leisel Jones OAM was inducted into the Sport Australia Hall of Fame in 2015 as an Athlete Member for her contribution to the sport of swimming.

Jones earned the nickname “Lethal Leisel” as she became one of the most successful Australian female swimmers of all time and the first to compete at four Olympic Games. Throughout an Olympic career that spanned the 2000 Sydney Games through to London in 2012, the breaststroke specialist won nine Olympic medals; three gold, five silver and one bronze.

Jones was virtually unbeatable at Commonwealth Games level between Manchester 2002 and Delhi in 2010 as she won 10 gold medals and one silver – including her 50m, 100m and 200m breaststroke clean sweep in Melbourne in 2006 – and at World Championship level she won seven gold, four silver and three bronze across five long course appearances and held 14 world records. She also won a silver and a bronze in World Short Course Championship events and one gold, four silver and one bronze at the Pan Pacific Championships.

Her record of 21 gold, 15 silver and six bronze major championship medals, plus two world records in each of the 100m and 200m breaststroke, sit amongst history’s greats.

Jones was first selected on the Australian team at just 14 years old when she won the 100m breaststroke event at the Australian Championship in Sydney in 2000. This win ensured her selection on the Australian Olympic Team, and she made her debut at the Sydney Games as a 15-year-old. She left school the same year focus on taking her swimming to the next level and was rewarded, when she swam beyond anybody’s expectations to claim 100m breaststroke Olympic silver in Sydney – in a personal best time – and was part of the silver-medal-winning 4x100m Medley Relay Team with Dyana Calub, Petria Thomas and Susie O’Neill.

In 2002, Jones claimed her first individual gold medals at a major event when she won the 100m and 200m breaststroke double at the Manchester Commonwealth Games. They were a golden games for Jones, as she enjoyed Medley relay success as well.

Jones’ stroke was almost unmatched at this point and in the lead up to the 2004 Olympic Games in Athens, she set a new 200m breaststroke world record which led to high expectations for her performances in the Games. She would finish the Games with two individual bronze medals, however, claimed her first Olympic gold medal as part of the Women’s 4×100m Medley Relay with Giaan Rooney, Thomas and Jodie Henry, which was now considered to be among the strongest swim teams in the world.

Jones completed a clean sweep of the breaststroke events – 50m, 100m and 200m – at the Melbourne Commonwealth Games in 2006 which remains the only time this has been achieved in the breaststroke events in Games history. In the 100m final, she broke her own 100m world record and capped the Games off with fourth gold medal and new world record time in the 4×100m Medley Relay, swimming alongside Sophie Edington, Jessicah Schipper and Libby Trickett (nee Lenton).

The 2008 Beijing Olympics are often to be considered Jones’ proudest career moment. She claimed her first individual Olympic gold a full body length ahead of her nearest rival and smashed the world record by nearly two seconds in the 100m breaststroke final and finished second in the 200m, only beaten by a world record swim, then bounced back in style alongside Emily Seebohm, Schipper and Trickett, as part of the 4x100m Medley Relay Team that smashed the world record by more than three seconds on their way to defending their Olympic title.

Her Olympic swansong came in London in 2012, after qualifying with wins in the 50m, 100, and 200m finals at the 2010 Australian Championships and becoming the first Australian female swimmer to compete in four Olympic Games. She bowed out an Olympic silver medalist after finishing second in the 4x100m Medley Relay, alongside Seebohm, Alicia Coutts and Melanie Schlanger.

Jones retired from international swimming after the 2012 Olympics with a competitive record that will stand the test of time.