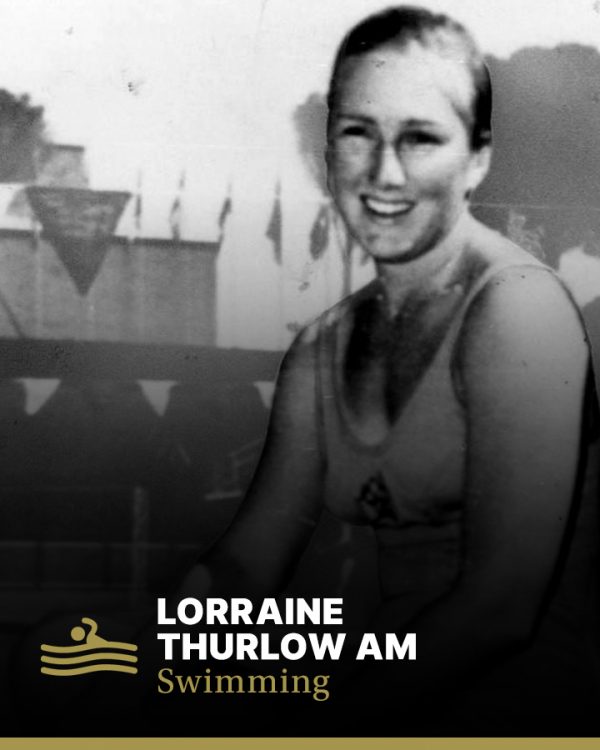 Lorraine Thurlow (nee Crapp) AM was inducted into the Sport Australia Hall of Fame in 1986 as an Athlete Member for her contribution to the sport of swimming.

Lorraine Crapp was one of the group of champions, male and female, who spearheaded Australia’s domination of world swimming in the ’50s.

Lorraine, with 23 world records (16 individual and seven relay), was the first great swimmer of the modern era of Australian swimming; this in spite of the fact that her style resembled the traditional body flat on the water, six-beat kick American crawl that the Australians were replacing with their rolling perpetual motion centre line crawl with a two-beat kick. She had been a youthful protégé of Dawn Fraser’s mentor Harry Gallagher, but at 16 switched to the coaching of Frank Guthrie.

The most remarkable swim of her life did not involve a gold medal. On August 25, 1956 at Townsville, Queensland, she became the first woman ever to break the five minute barrier for 400m freestyle; along the way she broke three other world records – 200m, 220yds and 44yds. Although she improved on all times later in her career, her four world records in one swim (she slashed 18.2 seconds from the previous 400m record to clock 4min 47.2 seconds), made headlines around the world. Later that year on October 20, 1956, Lorraine again broke four world records in one swim. Establishing the 100yds, 220yds, and 400m freestyle records on her way to the 440yds record. By the end of 1956, she held world records for 100yds, 200m, 400m, 440yds, 800m, and 880yds. She entered the 1956 Olympics as one of the hottest favourites in the history of women’s swimming.

Lorraine was a leading member of the Australian swimming team that dominated the pool at the 1956 Melbourne Olympics – and a great early rival of Dawn Fraser. Coming into the Games they shared the world 100m record. In the Olympic 100m final, Dawn beat Lorraine in a tight finish, with both under world-record time (Crapp’s time was 1:02.3). Faith Leech made it a 1-2-3 victory for Australia. In the only other individual women’s freestyle event, 400m, Crapp drew away from Fraser after two laps to win easily in Olympic record time of 5:54.6. Fraser finished second.

Australia’s squad of Dawn, Sandra, Sandra Morgan and Lorraine, swimming in that order, set a world record to win gold in the 4x100m relay in a time of 4:17.1. She won silver with the 4x100m relay team (4:11.3), and retired afterwards.