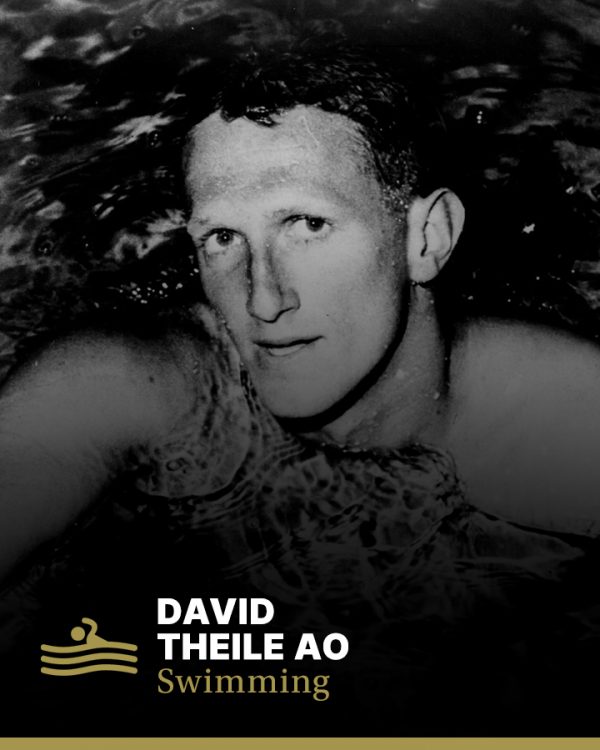 David Theile AO was inducted into the Sport Australia Hall of Fame in 1985 as an Athlete Member for his contribution to the sport of swimming.

Theile remains the only Australian ever to have won an Olympic backstroke swimming gold medal, and he did it twice (Melbourne 1956 and Rome 1960). That successful defence of the 100m backstroke title makes him one of nine Australians who have won individual back-to-back gold medals in the same event – with Dawn Fraser (twice), Bobby Pearce, Shirley Strickland, Murray Rose, Kieren Perkins, Michael Diamond, Ian Thorpe and Grant Hackett.

Theile learnt to swim at the age of five, along with his three sisters after being enrolled in a swimming program by his parents. He developed a love of swimming, which relieved him from the boredom of the town, as “the local pool gave us something to do”.

By the age of 10, Theile was enjoying success at local swimming carnivals, so his father offered to arrange for him to be coached, but left Theile with the choice of coaches. Of the two coaches in the town, Theile chose Arthur Cusack, who had a reputation as a physical training instructor of whom Theile recounted as being “tough and enthusiastic”. Cusack turned out to be his lifelong coach. Under the guidance of Cusack, Theile won Queensland junior and open titles in all four strokes. In 1954, at the age of 16, he came second in the open backstroke, and after becoming the national junior champion that year, he decided to concentrate on the given stroke. In 1955, he captured the 110yds backstroke title at the Australian championships in Adelaide. That same year, Thiele set the Australian 100m backstroke record of 1:07.4 seconds in 1955, breaking a 17-year-old record set the year he was born (1:07.8 by Percy Oliver in 1938). At the same time, Theile completed his secondary education and was awarded an academic scholarship to study medicine at the University of Queensland.

In 1956, he was selected to represent Australia in the Melbourne Olympics, and he was forced to defer his studies. He won the 110yds Queensland backstroke title before retaining his Australian title in Sydney. He joined the Australian team at the 12-week winter camp in Townsville, where he worked under the tutelage of Forbes Carlile. At the Townsville camp, Theile initially swam slower in the time trials than John Monckton and John Hayres, but eventually defeated them in the final time trials. At a later Brisbane event, he won again in 64.5 sec, but Monckton defeated him in Sydney with a new record time of 63.3 sec. However, Theile later struck back with a time of 62.9 sec at the final trials in Melbourne, setting a new world record for long-course events.

At the 1956 Olympics, only a 100m backstroke event existed, in which there were 25 competitors. Theile won his heat to qualify second fastest for the semi-finals behind Monckton, who set an Olympic record in his heat. After some officials had questioned his turning style during the heats, Theile refused to give a demonstration to the judges as his team manager had previously promised them. He used a conventional turn in the semi-finals as did the others, coming second to Monckton to progress to the final. In the final Theile made a good start and seized the lead from the start, never relinquishing it to win by more than a metre and a half from Monckton, setting a new world and Olympic record of 1:02.2 sec.

Subsequent to the Olympic Games were the 1957 Queensland Championships, where Theile was disqualified for the only time in his career, after officials ruled that he had performed an illegal turn. Theile resumed his university studies in medicine, and skipped the Australian championships, allowing Monckton to win both the 110yds and 220yds backstroke events. In 1958, Monckton took the 110yds backstroke world record as national service prevented Theile from competing. Theile also skipped the 1958 British Empire and Commonwealth Games in Cardiff to pursue his academic career. In 1959, he competed in the Australian championships at the behest of the Australian Swimming Federation, who paid his fares to Hobart to compete, where he won the 110yds title in a time of 64.0 sec, well outside his best. He subsequently returned to medical studies for the rest of the year, when he moved to Warwick, Queensland, south of Brisbane to resume training with Cusack.

Theile won the 1960 Australian championships before deciding on an attempt to defend his Olympic title. Again, he had to attend a winter training camp in Townsville, which necessitated him to apply for special consideration from his university, which obliged by allowing him to undergo his training during the year at Townsville Hospital. He was able to train with Cusack in Townsville, who was apppointed as a team coach. Theile won the final trials in Townsville to gain selection for his second Olympics, along with Monckton.

Theile arrived in Rome as an outsider, despite being the defending champion as he had not regained his form of four years prior, with Robert Bennett and Frank McKinney of the United States posting faster times. This appeared to be the case in the heats, with Theile posting the third fastest time behind the American duo. In the semi-finals, Bennett was unable to repeat his earlier performance and Theile won, while McKinney won the other semi-final, also in a time slower than Theile. Theile attacked at the outset in the final, as was his style, and held a slender lead at the 50m mark over McKinney and Bennett. Theile made a good turn, lengthening his lead to half a body length, before holding off a late surge to claim consecutive gold medals, defeating McKinney by just 0.2 sec in 1:01.9 sec, setting a new Olympic record in the event. For the first time, the 4x100m medley relay was contested at the Olympics, and combining with Terry Gathercole, Neville Hayes and Geoff Shipton, the Australians finished well behind the Americans to win the silver medal.

After the games, FINA announced that the 100m would be dropped in favour of the 200m backstroke. Theile, a sprinter, immediately announced his retirement thereafter. He completed his medical studies in 1962, took up surgery, and went on to become president of the Royal Australasian College of Surgeons. The University of Queensland pool was later renamed in his honour. He was inducted into the International Swimming Hall of Fame in 1968 and was part of the organsing committee of the 1982 Commonwealth Games held in Brisbane. In 1997 Theile was made an Officer of the Order of Australia (AO) for his services to surgery.