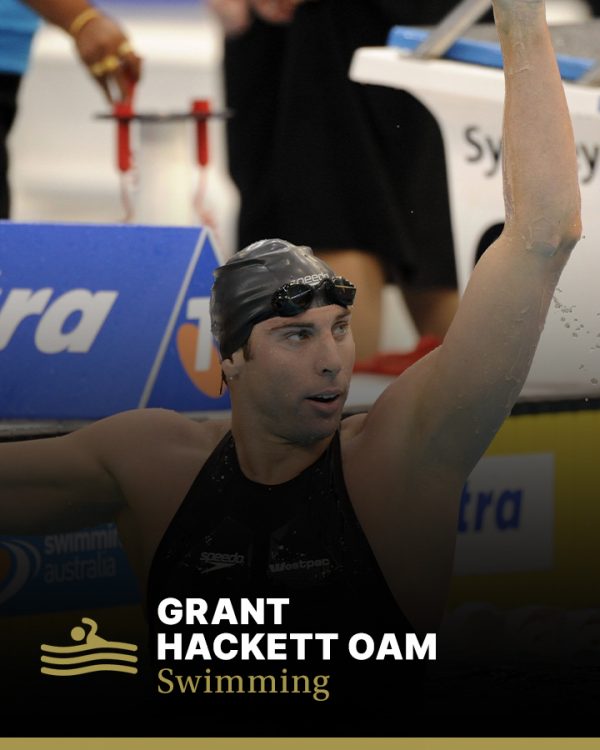 Grant Hackett OAM was inducted into the Sport Australia Hall of Fame in 2010 as an Athlete Member for his contribution to the sport of swimming.

Hackett dominated 1500 metre swimming for almost a decade, winning the World Championship in 1998, 2001, 2003 and 2005 and Olympic gold in 2000 and 2004 before finally losing his Olympic crown with a gallant silver medal at Beijing in 2008. He also won world titles at 400 metres and 800 metres, was Olympic and World silver medallist at 200 metres, and was a member of four Olympic and World Championship-winning relay teams.

With six world records, 18 World Championship medals and 23 (long course) national titles, he is the most decorated swimmer in Australian history.

Having taken up swimming in Southport, Queensland, at the age of four “because my brother did it” Grant Hackett burst onto the world scene in 1997 winning the 400 metre and 1500 metre titles at the Pan Pacific Championships. A year later he claimed his first world 1500 metres title at the World Championships in Perth, WA -also winning silver in the 400 metres freestyle as well as silver in the 4×200 freestyle relay.

Although Hackett was almost invincible at 1500 metres over the next decade, and set world records at 800 metres, he was also formidable over 200 and 400 metres, winning the world title over 400m in 2005 and setting a world short-course record for 400m in 2002. His 400 metres and 200 metre times remain the second fastest in Australian history and he may well have claimed more World and Olympic gold at these distances had he not been a contemporary of Australia’s greatest Australian sprint swimmer, Ian Thorpe.

He was captain of the Australian swimming team form 2005, when the position was introduced, until his retirement on 2008.