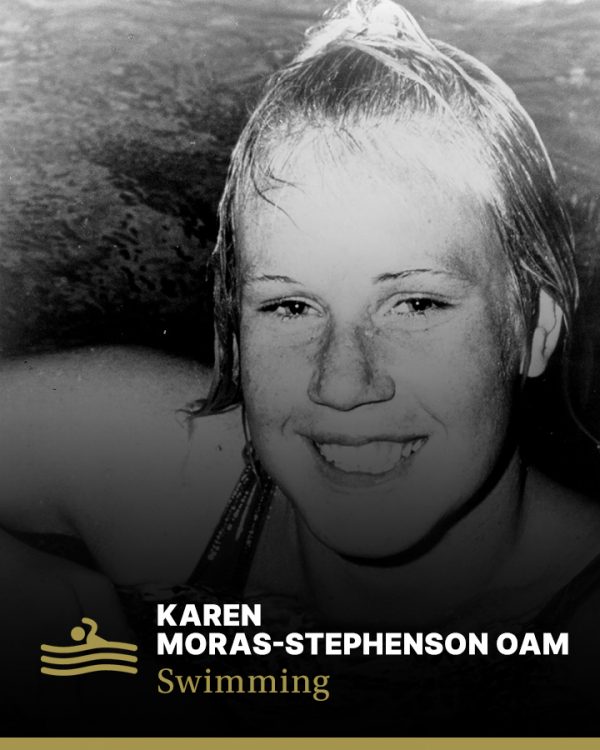 Karen Moras-Stephenson OAM was inducted into the Sport Australia Hall of Fame in 1985 as an Athlete Member for her contribution to the sport of swimming.

Moras, one of Australia’s finest middle distance swimmers, set world records in the 400m and 800m freestyle, won three gold medals at the 1970 Edinburgh Commonwealth Games, and bronze in the 400m at the 1968 Mexico City Olympics. She emerged from the Ryde Swimming Club, where her talents were fostered by renowned swimming coach, Forbes Carlile. Although she set multiple world records she peaked between Olympics and was unable to capture gold at Olympic level.

Making her international debut as a 14 year-old prodigy, Moras was expected to win medals at the 1968 Mexico City Olympics. She struggled, however, to adapt to the rarefied air at high altitude conditions and required medical treatment for breathing difficulties and hyperventilation. Despite this Moras managed to salvage a bronze medal in the 400m freestyle, behind the American duo of Debbie Meyer and Linda Gustavson. She nearly claimed a second bronze in the 800m freestyle, being beaten into fourth by 0.1s by Mexico’s Maria Teresa Ramirez who was much more adapted to the local conditions.

On Moras’ return to Australia, a new swimmer, Shane Gould, had joined Carlile’s group and by the end of the year Gould had defeated Moras in state-level carnivals. In 1971, after Gould claimed every freestyle world record from 100m to 1500m, Moras left Carlile’s group to train under Don Talbot, feeling that Carlile was spending too much time focusing on Gould. In London in March 1971, Moras set a world record for the 400m, swimming 4:22.3 seconds.

Moras qualified to represent Australia at the 1972 Munich Olympics in the 400m and 800m freestyle and the 400m individual medley. Captaining the team, she failed to reach the final in any of the events. Her sister, Narelle Moras, also competed at the Munich Games, finishing eighth in the 800m freestyle. She retired from competitive swimming after the Olympics.

In all, Moras won eleven national championships during her career, ranging from 200m to 1500m.

Moras managed the women’s swim team at the 2002 Manchester Commonwealth Games and was Section Manager Swimming at the 2004 Athens Olympics. She is currently Aquatic Director at Presbyterian Ladies College in Sydney.