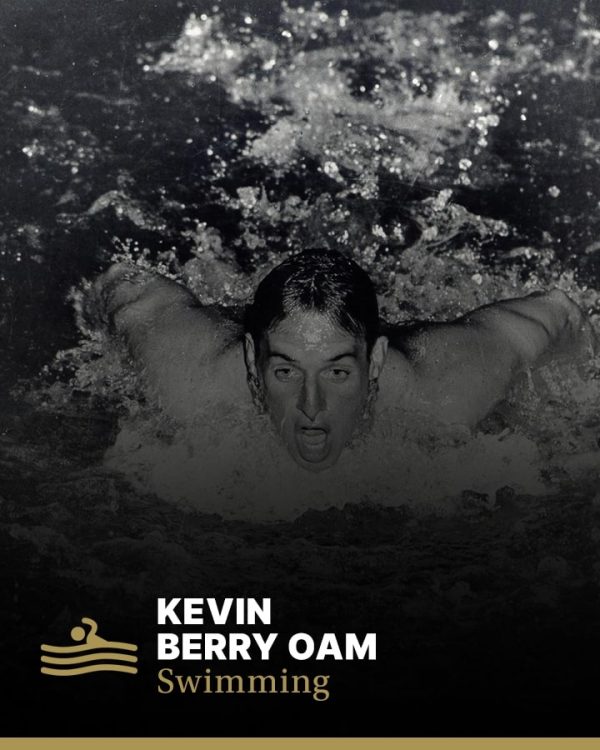 Kevin Berry began his international career as one of Australia’s youngest ever Olympic representatives. He was just 15 when he took to the starting blocks at the 1960 Rome Olympic Games, finishing a creditable sixth in the 200m butterfly final. A devout Catholic, the young swimmer also had an audience with Pope John XXIII in Rome, and offered to teach him to swim.

In the following years, Berry established himself as the finest butterfly swimmer in the world. He set three of the four recognised world butterfly records in February 1962, and demolished all opposition in the Perth Commonwealth Games later that year.

He won three gold medals at the Perth Games, in the 110yds butterfly, the 220yds butterfly and as the butterfly representative in the 4x110yds medley relay. In the individual 110yds, he equalled his own world record.

The years 1962 to 1964 represented Berry’s peak in the pool, as he gave his all to training and committed effort, coupled with his undeniable talent in one of the most difficult of all swimming disciplines. In all, he created and held 12 world records between 1961 and 1968. He also won nine gold medals in individual and relay events at Australian championships, confirming his status as one of the supreme butterfly swimmers of his time.

Some considered Berry to be past his best when he went to the 1964 Tokyo Olympics, but he proved them wrong, coming from behind to win the 200m butterfly, and breaking the world record in this event for the fifth time. He also returned from Tokyo with a bronze medal for his efforts as part of the 4x100m relay team.

Prior to the Tokyo Games, Kevin had enrolled and was on an Athletic Scholarship at Indiana University (1963-1968) coached by Dr James “Doc” Counsilman. He continued his rivalry with Carl Robie from the University of Michigan, they alternated finishing first and second in several meets.

Berry’s relatively brief but nonetheless illustrious career ended with his retirement after Tokyo. He was inducted into the International Swimming Hall of Fame in 1980, and was awarded a Medal of the Order of Australia (OAM) in 1992. Berry maintained a strong connection to the Olympic movement, as well as the sporting fraternity as a whole. He was a photographer and pictorial editor with the ‘Sydney Morning Herald’, and also held the position of Head of Sport with the ABC.