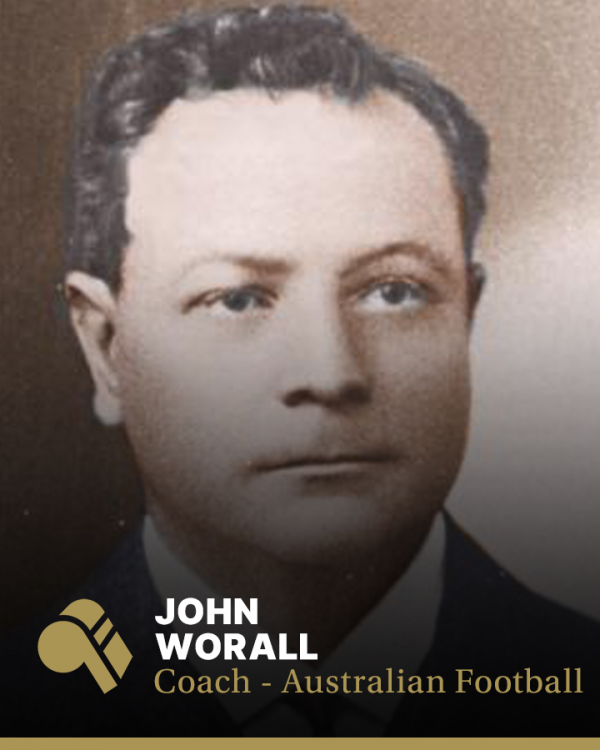 Having attended the local state school in Maryborough, John Worrall went to Ballarat where he impressed the secretary of the Fitzroy football club who encouraged him to move to Melbourne and to join the ‘Maroons’ in 1884. In his nine seasons from 1884 until 1892 Worrall captained Fitzroy for seven years, represented Victoria in intercolonial matches and was named ‘champion of the colony’ in 1887 and 1890. A nuggetty and determined rover, he could soar for marks and kick accurately with either foot. In 1908 Fitzroy celebrated their 25-Year Jubilee, declaring Worrall, Tom Banks, Micky Grace, Pat Hickey and Percy Trotter as their greatest players to that time.

Having assisted in founding the Victorian Football League in 1896, Worrall joined Carlton as secretary/manager in 1902 and took over the coaching of a club, which in the previous five years had finished no higher than second last on the VFL ladder. This proved to be the real birth of the Blues after struggling to remain competitive. Carlton reached the finals in 1903, 1904, and 1905 and won three consecutive premierships in 1906, 1907, and 1908. Worrall insisted when he took over that he be in charge of all team matters, including training and team selection. To that stage, the club captain had been the team’s unofficial coach. Now, however, Worrall was in charge and, in reality, he was football’s first coach.

He began to rebuild the side by moulding young recruits — fast moving, high marking, big men — into a team that would develop a direct, long kicking game. The new man in charge told the Carlton players he would build his team around discipline, teamwork and dedication – and he was as good as his word. As coach, he donned togs at training sessions, organised strict schedules, demanded unflinching courage and imposed stern discipline: ‘Boys, booze and football don’t mix’. The players soon learned not to cross the boss and Carlton improved dramatically in Worrall’s first season of 1902 to win seven games and finish sixth.

Carlton made the finals for the first time the following year and was expected to win the flag in 1904, only for the club to be rocked by a controversy. The club sacked Worrall over his accounting methods, even though there was never even a hint of dishonesty. The players rallied behind Worrall and, after winning an election against the old guard, reinstated their secretary/coach. The bickering took its toll and Carlton went down to Fitzroy in the grand final and then slipped to third position in 1905.

Carlton had to wait until 1906 for its first flag, defeating Fitzroy by 26 points in the grand final, with centreman Rod McGregor the Blues’ star. It was the start of a glorious Carlton era, with the Blues winning the next two premierships to become the first league club to win three consecutive flags.

In July 1909, after the players demanded to be paid more than 30 shillings a week and expressed resentment at his spartan constraints, Worrall resigned as coach on July 29 “for the sake of the club”. The feuding continued into 1910. He was accused of ballot-rigging and dumped as secretary when a ‘reform’ group swept to power on March 20. Fred “Pompey” Elliott, a great Carlton player, took over as captain/coach, but the Blues went down to South Melbourne by two points in the grand final and a massive internal row ensued, with Worrall’s supporters claiming his departure had cost the club the chance of a fourth consecutive flag.

Wounded by such treatment, Worrall went to Essendon and coached the ‘Same Old’ to successive flags in 1911 and 1912. When the Australian Football Council was formed in November 1905, Worrall was one of its two elected VFL delegates. He was later made a life member of the AFC, as well as of the VFL and the Fitzroy Football Club, but never of Carlton.

Already writing for the Sydney ‘Referee’, in 1916 Worrall joined the weekly ‘Australasian’. His knowledge, experience and judgement of football and cricket made him a respected authority on both codes. For over 20 years his columns were characterised by poised sentences and rich vocabulary; for all its partisanship, his direct prose was spiced with comparison, reminiscence and prediction, and conveyed a sense of drama. As early as November 19, 1932 Worrall saw menace in the English fast bowlers; by the 26th he wrote of their ‘body attack’, by December 3 of their intimidatory deliveries. Worrall published the term ‘bodyline’ on December 10, thereby establishing the word in sporting vocabulary.

Tough and stubborn, passionately fond of sport without the sideshows, he did not make friends easily. With little time for backslappers, Worrall counselled young players and did what he could to assist aspiring sports writers. While respecting (Sir) Donald Bradman, he remained convinced that Victor Trumper was Australia’s greatest batsman.